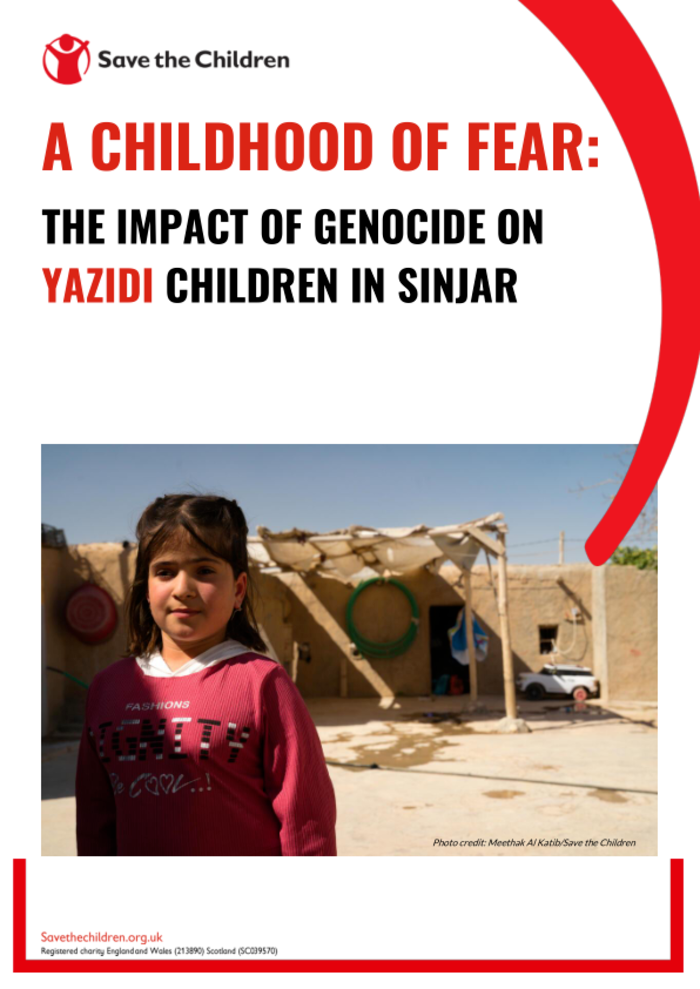 Yazidi children still live in fear 8 years after the genocide

ERBIL, September 22, 2022 – The international community must not forget the Yazidi children whose lives were shattered by ISIS attacks in northern Iraq eight years ago, and must help them fulfill their right to education and the hope of a better future, said Save the Children. This day.

Some 400,000 Yazidis, an ethnic and religious minority group, were captured, killed or forced to flee their ancestral land in Sinjar in August 2014 after ISIS crossed the border from Syria. The United Nations has recognized the treatment of the Yazidis as genocide[1].

Up to 3,000 women and girls were abducted, suffered rape and other forms of sexual violence, and many remain missing. Young children were separated from their families and forcibly recruited by ISIS.

Eight years later, many Yazidi children remain displaced from their communities. Many live in unsafe environments surrounded by physical reminders of the violence experienced at the hands of ISIS, including destroyed homes, schools and hospitals.

To understand the impact of the genocide on young children, Save the Children spoke to 117 children between the ages of 7 and 17, who were very young or just babies when they lost their mothers, fathers, siblings and family members in the violence, as well as 33 caregivers.

Children of all ages told Save the Children about their fears and lack of security in their daily lives. Among teens, 39 of the 40 involved in the study said they did not feel safe where they lived and were concerned about kidnappings, sexual violence, recruitment by armed groups and more family loss or separation, among other issues.

“Every day we see young children carrying weapons and working with security forces, armed groups, and they are still young, they are under 18 years old,” said Khalid*, a boy between 7 and 10 years old whose real name was withheld by safety reasons.

Language barriers in particular were raised as challenges, as some children forgot their native Kurmanji, or were born into captivity and never learned it, making it difficult to communicate and connect with their families and reintegrate into their communities.

Both children and caregivers noted that available services and programs did not meet the urgent and overwhelming needs of girls and boys experiencing sexual violence, those forcibly recruited by ISIS, or children born into captivity.

Yazidi children told researchers they wanted to learn, but eight years later, they are still being denied the right to education. For many Yazidi children, their nearest schools are empty, bombed and destroyed and they fear traveling too far, while a lack of quality materials and textbooks and a shortage of staff also impede their education.

“The fear that our sons and daughters will go to distant schools for fear of being kidnapped,” said caretaker Souzan*.

The lack of civil documentation also prevents some Yazidi children from going to school. Many Yazidi children lost their identity documents during the genocide, while younger children may not have been registered at birth. Without these documents, children cannot access basic services such as education and health. Obtaining new documentation can be expensive and complex. Children born in captivity face even greater challenges, as proof of paternity is required in Iraq for the registration of unmarried parents. Barring this, a child is registered as a Muslim, making him non-Yazidi both legally and culturally, further stigmatizing him.

See also  From shelter to safety: It's a 'prideless' world for the LGBTQIA community

“Yazidi children continue to live in fear of what they and their families experienced at the hands of ISIS and what they experience in their daily lives now. Their fundamental rights as children are still denied to them. The urgent care and support they need to help them process their trauma and heal is still very scarce. Many children are still missing. If nothing changes, the impacts of the genocide on Yazidi children will only deepen.”

Save the Children calls on the international community to work with the Government of Iraq and the Kurdistan Regional Government to establish specialized services for Yazidi child survivors to reintegrate into their communities, invest in quality education and infrastructure in communities Yazidis and ensure that Yazidi child survivors of sexual violence and recruitment can re-enter the education system with mental health and psychosocial support.

They must also take steps to ensure that Yazidi children receive justice, accountability and reparations for the grave violations, crimes against humanity and war crimes perpetrated against them.

The children’s rights organization also calls on the government of Iraq to ensure that all Yazidi children can obtain civil documentation to access basic needs and rights, such as education and health, and to amend all relevant Iraqi laws to allow that the mothers of children born of war choose. your children’s religion at the time of registration.

Save the Children has been operating in Sinjar since 2017 to support returning families. We work alongside communities and in partnership with local groups to help people find jobs, rebuild community infrastructure, and provide essential services like healthcare and legal advice.

We have spokespersons available for this release.

Daphnee Cook | Head of Global News | Save the Children International

[1]The United Nations first concluded that ISIS’s treatment of the Yazidi people constituted genocide in a 2016 report, “They Came to Destroy: ISIS Crimes Against Yazidis”, presented to the Human Rights Council, June 2016.