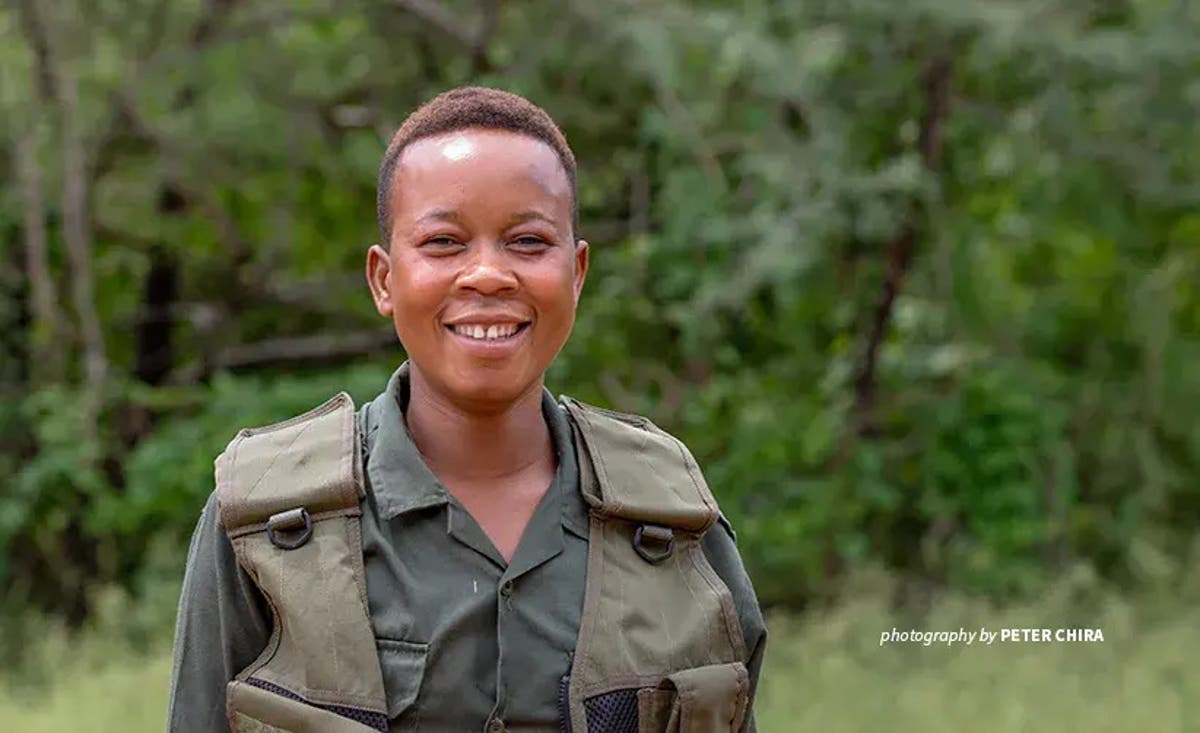 Twelve years ago, a dedicated anti-poaching ranger was brutally maimed to death after being ambushed by a lion at a safari park in northern Zimbabwe. Eight years later, his daughter overcame those emotional wounds to embark on the path that her father began.

Wildlife scout Edith John is now one of 15 female scouts in a male-dominated industry, helping the Mbire community in central Zimbabwe deal with incidents of human-wildlife conflict safely.

Edith, 32, says her dedication to protecting wildlife is a product of her father’s love of conservation.

“I am a product of my father’s love of wildlife and his love of people who live with wildlife. My father was a game hunter who bravely protected wildlife from poachers,” she says.

“He also worked very hard to protect farmers from wild animals. He was killed by a lion in 2010 during his journey working on human-wildlife conflict. His death did not kill my spirit for the protection of wildlife.”

Official data shows just over 350 people have been killed in human-wildlife conflicts since 2014.

At least 90 people have been killed in the last 15 months. Elephants, lions, and crocodiles account for the majority of human-wildlife conflict encounters.

Just over 1,150 animals, caught up in conflict with humans, have been killed by rangers in the past eight years across the country, officials with the Zimbabwe Wildlife and Parks Authority say.

Wildlife experts say it is extremely unusual for lions to attack humans, but they are quick to remind that “wildlife don’t follow any rules.”

The tragedy, however, did not deter Edith.

In 2018, she began a journey with the African Wildlife Foundation (AWF) to conserve wildlife, having been nominated among the first female recruits to help spearhead community conservation in Angwa village in Mbire district.

At first, she faced resistance from her community, as the job of a community scout required one to take up arms and actively defend the community from wild animals and people, a job that is not the traditional domain of women in rural areas of Zimbabwe.

They, however, accepted the idea later, she says. Edith’s wildlife management training, supported by AWF, provided modules on human rights and rights-based conservation.

Among the duties of community wildlife scouts is to ease human-wildlife tensions in communal areas and conduct counter-operations to reduce illegal wildlife trade.

They also respond to incursions by large mammals such as elephants and mitigate predation on livestock by lions and hyenas, while also educating residents about the benefits of conservation.

“During the process, I was pleased to learn that there were women in this area who were interested; sadly, all they were missing was opportunity,” she told the AWF website.

“Personally, advocating for the recruitment of the community’s first female scouts is extremely meaningful. When I joined the Zimbabwe Parks and Wildlife Management Authority (or Zimparks) as a young budding environmentalist, my colleagues were largely men,” she continued.

“In addition, the authority had not appointed any women in leadership positions. It could take up to 10-15 years for a woman to be promoted in her job, either to a higher position or as an area manager. By the time I left Zimparks, she had risen through the ranks to Chief

Ecologist who oversees the terrestrial and aquatic ecology portfolios in Zimbabwe’s protected areas.

For Edith, her desire to grow up was to become a nurse. That changed when the tragedy occurred in 2010.

“Then I knew I wanted to do my part to make coexistence of people with wildlife safer,” he says.

Now he finds solace and purpose in spending his days keeping the peace between humans and wildlife.