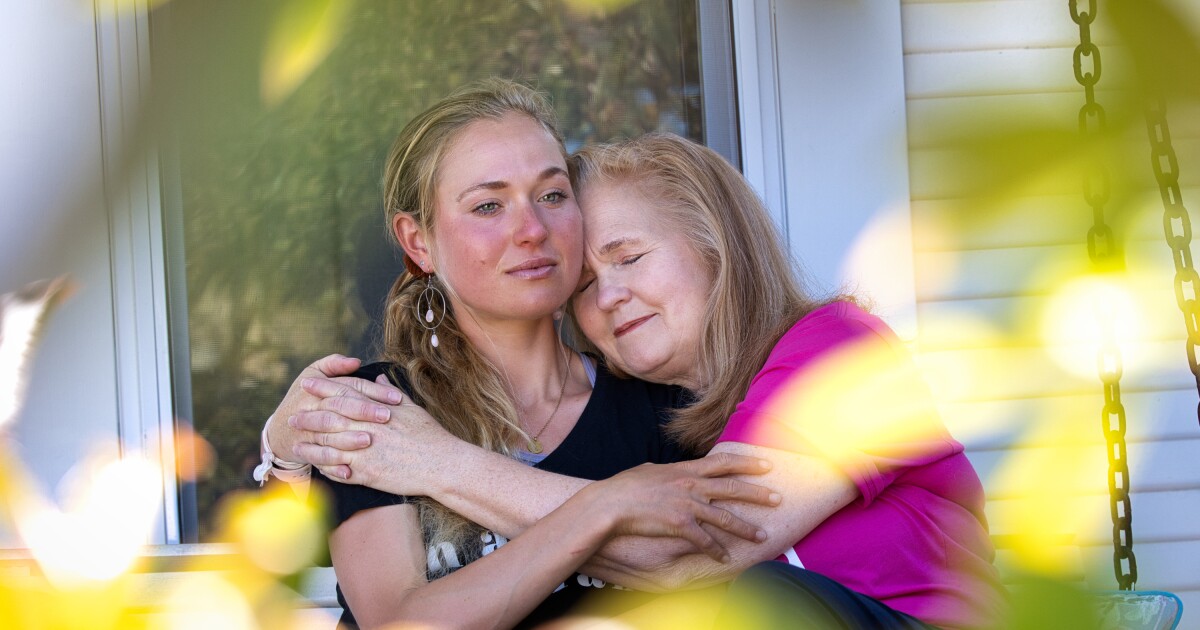 Have something to say? Lookout welcomes letters to the editor, within our policies, from readers. Guidelines here.

Gail Pellerin: I felt as if I had been punched in the stomach on the morning of June 24, when I heard that the Supreme Court overturned Roe v. Wade. I feel so lucky to have lived my reproductive years with Roe v. Wade being the law of the land. I’m so sorry you don’t have that freedom, Emily.

Like your mother, I am afraid of this new world we live in where rights are being taken away from us. I am concerned about how it will affect you and others who are of reproductive age. I want to protect you from the hate and patriarchy in this world, and it breaks my heart that I can’t.

You remember my abortion story.

I shared it with you when you went off to college at UC Davis because I wanted to remove the stigma, put the face of someone you loved behind the debate, and be an example of the choices you have. We have had many difficult discussions over the years.

I wasn’t the stay-at-home mom you might have wanted, but I did the best I could. Sharing this story was different. She didn’t often talk about life “before” your father, when she was a single woman working and living the life of a single woman.

I was worried what you would think of me. But I didn’t want any secrets between us either, so I told you. When I was 26, only two years older than you are now, I got pregnant when my birth control failed. I made the difficult decision to abort. As it turned out, I started miscarrying the day before my scheduled appointment, but still went through with the procedure.

If I had been forced to have an unplanned pregnancy at age 26, I would not be the woman I am today. I couldn’t have handled the responsibility then. I am angry and outraged that women, including you, will not have that option in more than half of our states.

Emily Chaffin: I woke up on June 24 hoping to celebrate your 60th birthday. I had planned to spend the whole day with you: watch the sunrise on the pier, a walk on its beach with your dog Darwin and a barbecue at home with friends. I’ve put together your favorite meals: marinated chicken from Shopper’s Corner, grilled veggies from our Homeless Garden slice, a large salad, Tartine bread, and your favorite Have’A chips and guacamole.

You are running for office. It’s going to be a hectic time until November, and I wanted to relax just to be with you. I wanted the day to be one of celebration, but instead I was angry, hurt, confused, betrayed by my government. This is not the America I know and trust.

Of course I remember that conversation. She was 18 years old. It was hard to hear about your life before dad, but I’m glad you were open and honest with me. It helped me know that I could be vulnerable with you too. He has been so successful that it is hard to imagine that he has also struggled. I felt proud that you trusted me with your story and that you opened your life to me in that way. I felt that you had begun to see me as an adult.

Gail: Yes. That was a special moment. We were evolving from a parent-child relationship to an adult relationship. I was still, and still am, your mother, but our dynamic had changed a bit. When you become a parent to an adult, you can begin to share your vulnerabilities in a way you can’t with a child.

We are now sharing a dark moment in our nation’s history. We now live in two Americas. One that respects a woman’s right to abortion care. The other America where a womb is now a crime scene. Like so many mothers, I wish I could promise that everything will be okay, that it will get better. I hope so. But I just don’t know now. This could mean that you will be more limited in the place you choose to live than I am.

Emily: I feel lucky to live in California. But I am scared to think about what will happen to those who live in one of the states that will ban abortion. The luck of where you live can determine whether you live or die. People who live in states that ban abortion will do whatever it takes to end an unwanted pregnancy. People my age and younger. Students at the university. History shows that women will do what they can to end unwanted pregnancies, and the results are dire. Women can die or suffer lasting effects on their physical and mental health. I honestly believed this would never happen again. We are well educated and leaders among the nations, but instead of learning from the mistakes of our past, we are repeating them.

Gail: There are so many unknowns right now and so many unsettling scenarios. California is doing everything in its power to create a safe sanctuary state for women who want to come here for abortion services. There will be a constitutional amendment on the November ballot to guarantee abortion access for generations to come. People are signing up to drive people in need of abortions from the airport, escort them to their appointments, and provide them with a place to recover. But what will happen to these women when they return home? What are the legal ramifications for those who helped them obtain abortion services?

I get angry when I think of all the women who will be forced to give birth against their will. What will happen to those children? Will our social systems be overwhelmed? Women who have children they cannot afford often fall below the poverty line. Some remain in domestic violence situations because they cannot afford to leave. Some abandon their children and then those children turn to drugs, prostitution, etc. and end up in jail.

More coverage of Roe vs. Wade

Emily: I can’t imagine how terrifying our post-Roe world will be. Who can women trust? It is frightening and traumatic to be sexually assaulted. I know. It happened to me. It’s still hard to talk about it. It’s so degrading.

I was afraid and ashamed to tell someone my truth. I was barely able to admit it to myself. But after many months in therapy and hours of deep emotional work, I made it. You came to visit me in Davis and I finally got up the courage to tell you about the man who assaulted me during what was supposed to be a fun weekend getaway with my friends from college.

I was lucky. I escaped before he forced himself completely. But he was so embarrassed and terrified that he didn’t want to tell anyone.

I’m not sure I would have found the courage to tell you if you hadn’t shared your story with me. I knew you would understand. And you did.

He didn’t want to press charges. She just wanted him to go away. I never pronounced his name; I still never have. I try not to think about him, but unfortunately, this trauma still hits me. I can only imagine the horror of having to carry and give birth to a child of someone you despise.

I despise the person who did this to me. It makes me sick to think of those who will be forced to carry their rapist’s child, or have a child that is not wanted. There has to be a way to get the Plan C abortion pill to women who can’t get to a clinic.

Gail: I was so proud that you told me about what happened to you. It was another turning point in our relationship as adults.

I’m sure some people will try to find a way to restrict or criminalize home delivery of the abortion pill to people in states that ban abortion. After all, the courts have said they also want to consider restricting contraception. And there is talk of judges revoking same-sex marriages.

TELL US WHAT YOU THINK

Make your voice heard with a letter to the editor

Share your thoughts by sending a letter to the editor. Send us an email to [email protected]. Please include your full name, address and phone number for verification only. Lyrics must be 200 words or less. Do not include personal attacks, inaccuracies or vulgarities. learn more here.

Emily: Everything looks amazing. I am devastated to live in a country where five people with lifetime appointments in a court have the power to take away the rights of half the population. They know that this will have a severe impact on the BIPOC community, the poor, and the LGBTQIA community. We have to fight back. We have to find a way to reverse this decision and make sure that other rights are not taken away from us.

Gail: It really is unprecedented for courts to take away a right. The best way to defend ourselves is by voting. If our country could elect a majority of pro-choice leaders to our US Senate and Congress, then over time, we can change the composition of the Supreme Court and restore abortion rights.

Emily: I feel so betrayed. All three judges who were appointed under the Trump administration swore that Roe was established law. And now we’re all thrown into a chaotic situation where we’re looking for ways to codify Roe into federal law, or set up clinics on tribal land, or find ways to smuggle Plan B and C pills into states that ban the abortion. We are in 2022, and it feels like we have returned to the 1950s.

Gail: I know this is hard to accept. As I have told you before, every day we need to find something to be grateful for and something that brings us hope. Hope shone last week when Ketanji Brown Jackson was sworn in as the first black woman to serve on our nation’s highest court.

Emily: In my sea of ​​despair, I will look for hope. It will be hard to hear about young women being forced to have children they don’t want and governments failing to provide prenatal care, let alone the infrastructure families need after they have children: a well-paying job, child care, health care, a place affordable to live.

Gail: That’s why we keep fighting. We met. Talk later. We vote. We don’t give up. And we talk to each other. We hold each other. We share our vulnerabilities.

We have entered a new era in women’s rights. We are lucky to have each other. We are in this fight together.

Gail Pellerin is running for the 28th California State Assembly District. She served as the Santa Cruz County Clerk from 1994 until her retirement in 2020. She was elected four times. Prior to that, she served as the Santa Cruz County Elections Administrator and Government Relations Consultant. She married Tom Chaffin in 1992 and has two sons, now 24 and 27 years old. She graduated from Cal Poly San Luis Obispo and worked as a news reporter and legislative staffer for the State Assembly and deputy director of the Office of Majority Speaker Services. She has been living in the Santa Cruz area for 30 years.

Emily Chaffin graduated from UC Davis in June 2020. She is currently a staff aide to US Senator Alex Padilla of California. She was born and raised in Santa Cruz.