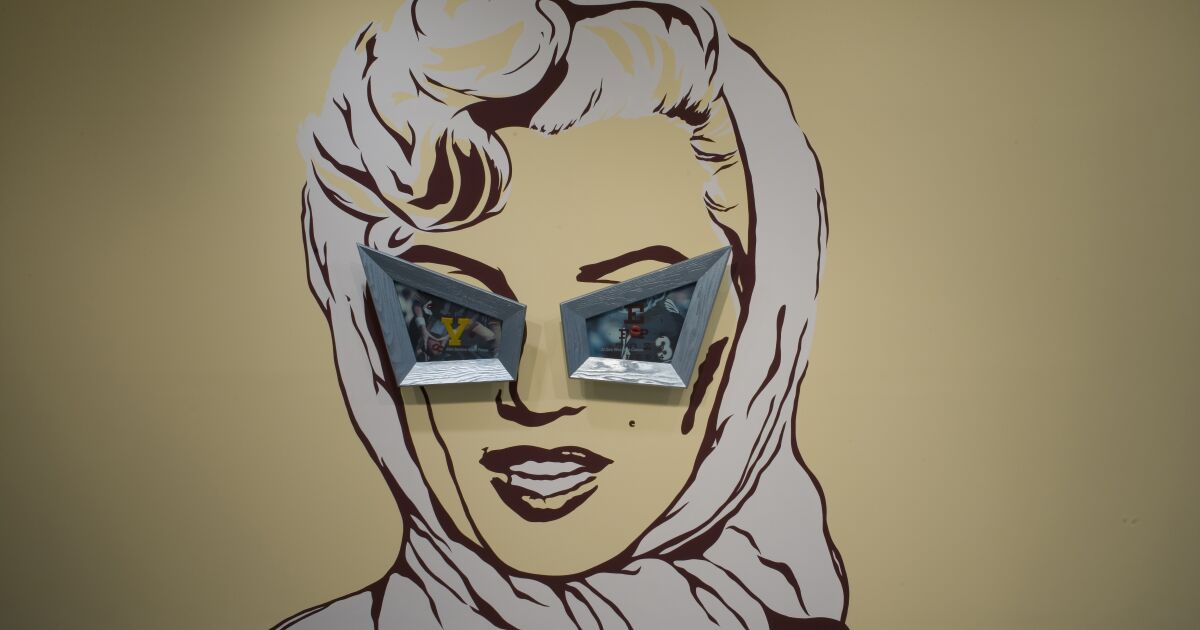 get complete details of Alexis Smith: Her Carefully Crafted Collages and Installations are on display at MCASD La Jolla

Few works by artists exemplify SoCal’s penchant for fusing images with text, found objects, and Hollywood memorabilia quite like the work of Alexis Smith, the subject of a new exhibition, “Alexis Smith: The American Way,” at the Museum. of Contemporary Art. San Diego (MCASD) in La Jolla.

As this display of 50 collages, assemblages, and installations from the 1970s to the 2010s demonstrates, Smith has unearthed our cultural touchstones, stories, and myths and artistically recreated them. Her collage, “Degree of Difficulty” (2005), juxtaposes a photo of the vibrant Britney Spears from a Pepsi ad, with an image of the elderly Shirley MacLaine from “Modern Maturity” and a photographic calling card of a prostitute. . With each image partially hidden by a geometric shape, the piece alludes to the objectification of women—the sexy young woman, the old woman, the sex worker—in contemporary society.

Smith has commented that his artworks are “…about the normal things that have to do with the experience of 20th century existence and a separate subtext of searching for meaning in life. You have to read each piece for yourself; there is no correct interpretation, there is no correct answer. Art is something that happens in your head.”

The set “Men Seldom Make Passes on Girls Who Wear Glasses” (1985), also an evolution of Smith’s intuitive art, takes its title from the famous two-line poem by 20th-century writer Dorothy Parker. Artwork includes a large portrait of Marilyn Monroe, painted directly onto a gallery wall, collaged in sunglasses, with photos of soccer players, and Parker’s poem. The wildly attractive installation, depicting the movie star making men the focus of her desires, instead of the other way around, becomes a magnet for art viewers.

Smith, born in 1949 in Los Angeles, not only transformed and reinvented her own life through her artwork, but her many collages and installations have helped advance our understanding of how culture, politics, and culture intersect. life. He once said, “I’m fond of popular culture because I’m a part of it… I think my work is a very strange hybrid of vintage assemblage and a practical concern with battered objects that is poignant, mixed with a literacy and a point. from a conceptual point of view”.

Smith’s imaginative approach to artistic creation was a product of his personal worldview, influenced in part by growing up with a psychiatrist father, when he began creating collaged books, and by his four years of study at the then-newly opened University of California Irvine art. school (she graduated in 1970).

At that Orange County outpost, artist instructors including Tony DeLap, Robert Irwin, Craig Kauffman, Vija Celmins, and Ed Moses trained students to think and behave like professional artists, employed unusual teaching methods, such as put crayons between their toes, collaborated on performance pieces, and even partied with them.

While this New Age educational approach puzzled some students, Smith embraced and boldly executed its paradigms, resulting in his ever-expanding artwork being recognized and exhibited in local, national, and international art venues.

One of his admirers is Anthony Graham, MCASD Associate Curator and curator of this Smith exhibition. He featured his 1980 collage “The American Way” in the museum’s 2016 show, “Selections from the Collection.” He then realized that Smith had not had a major museum exhibit in several years.

“With our strong holdings of his work and his impressive nearby public artwork, we are a fitting institution to showcase his entire career’s work,” he says. (Two of his public pieces, “Same Old Paradise” (1987), a 62-foot-long mural of a quaint village with hills threatened by a sinister snake, and “Snake Path” (1992), a winding 560-foot walkway long, are on display at the University of California, San Diego.)

Adds Graham: “I visited Alexis’s artist studio in 2017 in Venice, California, where I met her, Scott Grieger, her husband, and Erin Calla Watson, her studio manager. We have all worked together to capture the complexity and nuance of her vast body of work, presenting her first collages on an intimate scale and recreating several of her large immersive installations for this current exhibition.”

Smith’s “The American Way” assembly on an aluminum plate, featured on the current MCASD show, contains symbols of America, including a Coca-Cola bottle, a crossword puzzle, play money, and a bra.

“The piece is enigmatic with its combination of text, image, found objects, and screen-printed images,” says Graham. “These juxtapositions come together in poetic combinations that capture and amplify each other’s energy, creating individual associations in viewers’ heads.”

Other works of art in this Alexis Smith retrospective are multi-panel narrative collages, adhered to scenes painted directly on the gallery walls. Among these is a recreation of a group of installations, called “Raymond Chandler’s LA”, which was first shown in a Los Angeles gallery in 1980. Collages from the series, titled “Hello Hollywood”, “Golden State”, “Downtown” “Sunset” and “Tighrope” include quotes from Chandler’s novels, which capture the noir aspects of old Hollywood. He also worked as a screenwriter for movies and some of his books were later adapted into film noirs.

The backgrounds for these exhibits include abstract city skylines, roadside billboards, and diminishing telephone poles, which evoke the perspective of constantly receding while driving. For fans of Chandler’s novels and movies, these settings might suggest Detective Philip Marlowe driving through Los Angeles and Hollywood, while pondering unsolved cases.

These Chandler-influenced works are complemented by other film-inspired collages, including “Easy Rider,” “Midnight Cowboy,” “The Red Shoes,” and “The Girl Can’t Help It,” the latter titled by a Jayne Mansfield 1965. film. Smith’s collage, “Madame Butterfly,” references the opera of that name. These clever creations contain artifacts from film and theater, along with images and text.

“The American Way” follows MCSAD’s recent “Niki de Saint Phalle in the 1960s” exhibition with works by the energetic female artist of the older generation. In fact, both Saint Phalle and Smith have drawn from their personal life experiences, transforming them into formidable bodies of work, and many of her pieces address the dilemmas of contemporary women.

See also  10 Data Science Jobs: Which One Is Right For You?

“The sense of freedom resonates throughout Alexis Smith’s work, the resistance to convenient art-historical categories, her ability to continue to change and expand the formal strategies of collage, even the difficulty of situating her work in relation to her own biography. says Graham. in the exhibition catalogue. “But ultimately, it represents the power and potential for self-actualization inherent in the American way.”

Goldner is a freelance writer.