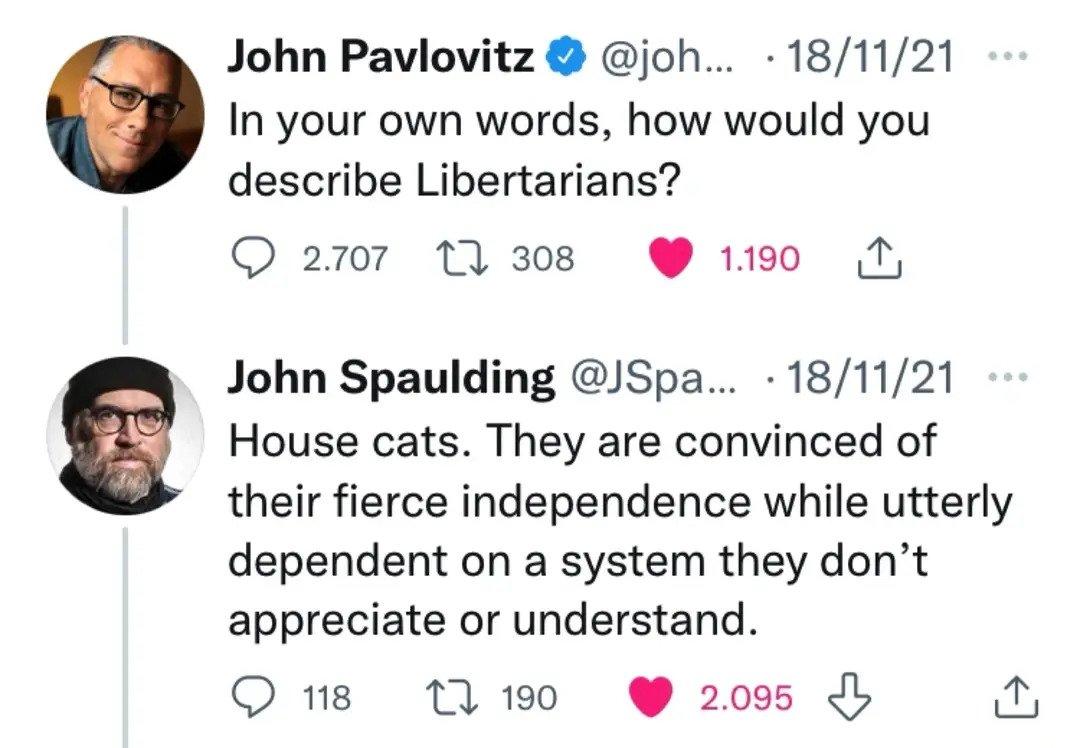 A year ago, progressive pastor and commentator John Pavlovitz asked his Twitter audience, “In your own words, how would you describe libertarians?”

One of his followers, John Spaulding, gave a response that quickly spread to the farthest corners of the internet.

“Domestic cats,” he replied. “They are convinced of their fierce independence while completely dependent on a system they do not appreciate or understand.”

The metaphor seems to have struck a chord, judging by how much this comment has been shared on social media. But is it a fair comparison? Are libertarians correctly considered house cats? We’ll see.

The main sentiment here is that libertarians don’t realize the benefits government provides and are ungrateful as a result. Like a cat owner, the government does a lot behind the scenes to keep our lives running smoothly, but libertarians don’t appreciate any of it. We are the recipients of countless services provided by others, but instead of showing gratitude We bite the hand that feeds us.

This line of thought reminds me of a famous exchange between Toine Manders, a Dutch libertarian, and a Dutch official who was questioning him about his views on taxes.

Official: Do you think that taxes are a form of theft?

Official: We use taxes to provide services to all citizens. Do you see that as a legitimate use of taxes?

Official: You live in social housing…

Officer: …made it possible…

Manders: Is it possible?

controls: [laughs] Sorry, that’s very under-nuanced. The government took everything from me. They took my house away so that they forced me to use social housing, and you mean to tell me that I should be grateful that they kindly provided me with social housing? sounds like him GDR when you say that

Officer: Do your children go to school?

Manders: That’s the same reasoning that the DDR directors used. “Have you enjoyed an education provided by the East German state and now you want to escape? You are antisocial. That’s the reasoning I hear from you. I’m surprised you dare say that.

Manders’ story is unique, but it highlights a common pattern. Yes, we are dependent on the government for many of our basic needs, but this is only because the government undermined our ability to fend for ourselves in the first place.

See also  How can Marblehead make sports safe for everyone?

And even when private services are not outright prohibited, the government often makes them a practical impossibility with taxes and regulations. Libertarians would love to give up our dependency on government and get everything we need from private companies, but that’s just not possible when private services are regulated ad nauseam and we still have to pay taxes regardless of whether we use public services.

In short, humans, libertarian or not, are not innately powerless. Rather, many have been surrendered powerless by taxes and regulations, to the point where they have no choice but to rely on the government.

And after all that, they expect us to be grateful? The assumption is impressive. It’s like someone is going to break my leg, hand me crutches, and then ask me to appreciate all he’s done for me. “You couldn’t even walk without me,” they might say. You are ungrateful. Am I not so kind and benevolent for giving you crutches?

No. No, you are not. I only depend on you because you have crippled me. Any story that begins with the government handing out crutches and not the rules and restrictions that made them necessary is missing the most important point.

Going back to the original question, are libertarians housecats? In light of the above, the answer has to be yes, at least in the sense that we are quite dependent on our owners these days.

The irony is that while the metaphor was initially invoked to denigrate libertarians, it can actually be harnessed to make a pretty compelling case. by libertarianism

It is true that, like domestic cats, many of us are dependent on our owners. But the parallel goes further. Like domestic cats, our dependency exists, not because we are inherently incapable of fending for ourselves, but because we live in captivity. The cat’s captivity is physical, ours is more practical (restrictions on our actions and on the contracts we can make with each other), but both types of captivity render an otherwise capable entity powerless to fend for itself. .

“‘Domestic cats’ are made, not born”, Peter Jacobsen remember us. “Feral cats are extremely hardy and resourceful. Only after you lock a cat indoors and declaw it does it become dependent.”

Now, it is debatable whether cats should be taken from the wild and domesticated. But for humans, such subjugation should be inconceivable. The libertarian creed is essentially that people should not be treated like pets, that we should not be subject to others as a house cat is to its owner. No one person or group, no matter how many support them, should be allowed to rule over the others.

See also  What is the difference between LGBT History Month and Pride Month?

Why? Because we were not born to be dependent and domesticated.

We were born to be free.

This article was adapted from an edition of the FEE Daily e-newsletter. Click here to sign up to get free market news and analysis like this delivered to your inbox every day of the week.