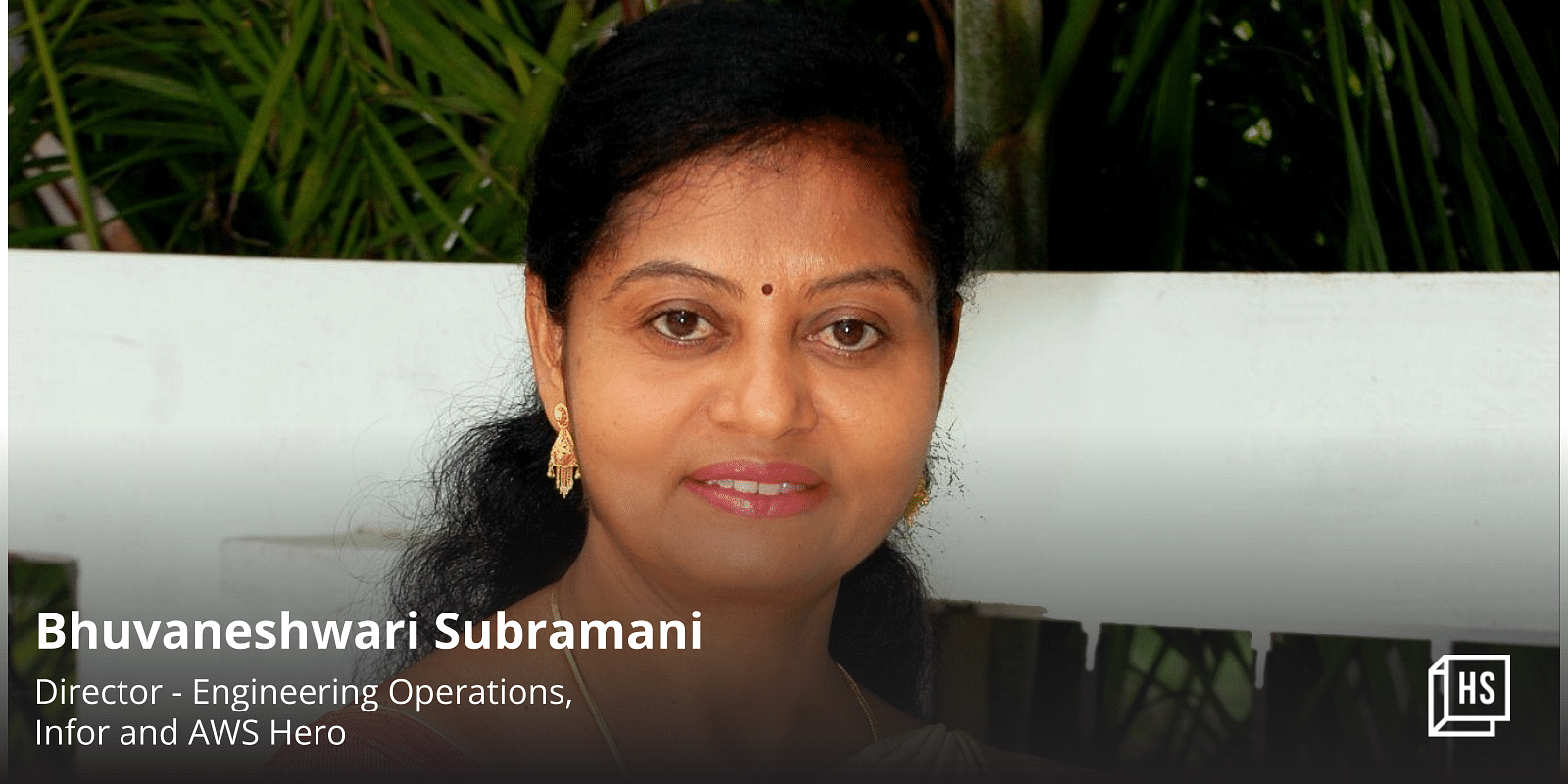 Bhuvaneshwari Subramani he believes that various events in his early life laid the foundation for who he is today.

As Infor’s Director of Engineering Operations and the first woman AWS Hero From India, Bhuvaneshwari grew up in a farming family in Sathyamangalam, a small town in South India.

With an early focus on sports and extracurricular activities, he represented Coimbatore in badminton and in fact dropped out of Science after school to study Literature so he could participate in sports. However, she returned to the STEM field and pursued a BE in Computer Science and Engineering, after his foray into the IT sector came along with an MBA in Information Systems and certifications in Cloud Architecture and Security.

In 2017, she joined the AWS Bangalore Group and was one of five women selected to speak globally for AWS Re:invent in 2018 and in 2019 she became the first woman AWS Hero from India.

In a conversation with His storyBhuvaneshwari takes us through his journey in IT, being an AWS hero, and his work at Infor.

Edited excerpts from the interview:

HerStory (HS): Can you tell us about your early years in technology?

Bhuvaneshwari Subramani (BS): I got interested in programming and technology during my college days, which grew over the years. I never hesitated to sign up for challenging projects or adapt modern technologies. Infor strongly encourages us to be agile when it comes to learning any innovative technology, which helps maximize our potential and gives us multiple platforms to do so. Our shared vision is to build a team of technophiles and not people managers.

HS: What are the highlights of your career spanning 22 years?

bachelor’s degree: Through my 22 years of experience, I have toured a wide variety of products. I started with a later stage of developing and maintaining B2B portals with Bannari Infotech in Coimbatore, where I designed and developed GIS and GPS based applications for desktop and web. I was also responsible for packaging applications, which became widespread in the following years. I joined as a software engineer and left as a project leader after a period of four years. Later, as a Senior Software Analyst, I developed and maintained the cross-platform installer for Team Developer 2005 and related products (April 2004 – May 2005).

From July 2005 to August 2006, I was associated with Synaptris Decisions as a build and release engineer, where I designed and developed installers for the IntelliVIEW suite of products and automated the build process for all products. I then joined Aptean, which gave me the platform to explore my diverse skill set for six years, and was involved in CSR, conservation and change management initiatives. I also worked on end-to-end application packaging, build automation, deployment to sandbox machines, and software configuration for ERP, CRM, and related products, serving the needs of multiple agile teams.

HS: What are your roles and responsibilities at present?

bachelor’s degree: I began my journey a decade ago at Infor as a Dev Ops Manager to lead Nexus (a company later acquired by Infor) for strategizing, architecture, automation and integration of continuous integration and continuous delivery at all levels including development, testing , not Production and Production Environments.

Over the years, I’ve steadily progressed as a multi-disciplinary team leader and delivered over 60 major releases for the Infor Nexus suite of products involving feature automation and integrations that propagated seamlessly to production. Now in the role of Director of Software Development, I am responsible for DevOps software management, performance testing, cloud development, and application lifecycle management.

In addition to the key deliverables, I am excited about my participation in various CSR programs, both tech and non-tech. I am a proud #MujeresDeInfor and an active member of the Women’s Infor Network (WIN) aligned with the mission of helping members on their journey of self-realization, realizing their potential and creating their greatest value.

HS: Tell us about teamwork.

bachelor’s degree: I believe in two things: growing together and having a team with equal opportunities. One of the interesting cases I remember was when I ran a tech boost initiative to help the best tech minds on my team create a platform to showcase their talent. Three of my team members from the performance testing team signed up for the challenge.

The team struggled for months: two hours a week during office hours and a few hours after office and some weekend collaborations. The team learned the art of presentation and prepared content-based courses on selected topics. After five months, we had three courses ready under application performance management covering the fundamentals of performance testing from the LoadRunner workshop and the JMeter workshop. After a series of rehearsals, the team was ready for a three-hour workshop and delivered a flawless presentation at two engineering colleges.

HS: What have been your biggest challenges and successes in your career?

bachelor’s degree: As I look back, while I’m happy with my journey from small-town first graduate to global tech technophile, blogger, and speaker, the path I traveled had its own ups and downs.

Embracing change has always been my constant. My association with Infor has been a decade of exploring, learning, and giving. Cloud adoption has been a huge win. We could improve our skills in AWS cloud technology and eventually lead a cloud development team. After advanced AWS training from our New York office, my association with the Bangalore AWS User Group played a crucial role in strengthening my cloud skills.

Challenges related to projects or deliverables have always interested me and solving those challenges was not as difficult as solving personal dilemmas. The double role of mother and working professional, with two children, was a great challenge during the first years of my career. CDC Software (Aptean now) allowed me to work from home and my managers were supportive and encouraging. I was promoted to Manager even before I went back to work after maternity leave. I returned to the office after my son was five months old and was allowed flexible work hours for another two months before returning to normal.

HS: What else can be done to keep women in the workforce?

bachelor’s degree: First of all, I have seen women leave their careers to get married. Some often quit to move or just quit their jobs altogether to start a family. If one is determined, skilled and lucky enough, it is always better to move to a city where there are opportunities for both partners.

Second, I have seen women quit their jobs during or after pregnancy. Companies must accept the fact that women can do their jobs in any circumstance, as long as the company supports them. I can proudly say that the women on my team and myself have proven stereotypes wrong and are great artists in both our professional and personal lives.

HS: Why do you think there are so few women in technology leadership positions?

bachelor’s degree: Women were seen in mid-level racing only until recently. But now times have changed, organizations are paying more attention than ever to diversity and inclusion. Women are gaining more positions in leadership sectors and are also part of the board of directors of organizations, which was not the case in the past. Women are also more interested in STEM studies and are evolving with the times, becoming tech savvy. However, like anyone looking to grow in CXO, women must also have business acumen and prepare for strategic positions from whatever vertical they grow in their functional specialization.

HS: Why should all organizations have an equal opportunity mindset?

bachelor’s degree: A diverse team adds new skills, talent, and experiences, all of which improve productivity and company culture. A workplace culture can be fostered that values ​​talent beyond stereotypes and inspires people to reach their potential by embracing diversity and providing equality.

In addition to fostering respect for co-workers, it also creates an open and friendly workplace culture, as well as an opportunity to support and encourage co-workers’ performance and contribution to company diversity.

HS: Tell us about your experiences as a global AWS speaker.

bachelor’s degree: From being a person who wanted to attend AWS re:Invent to being a speaker at the event for three consecutive years (2019, 2020 and 2021) it was a dream come true. This was made possible through my partnership with AWS User Group Bengaluru and my Infor Nexus team for their support in helping me present our cloud migration stories and use cases. When I’m a speaker at an event, I go on stage with the goal of reaching out to women and inspiring them to choose technology as a career. I also became part of the AWS India Summit 2022 Keynote and other global technology conferences.

HS: How does community learning help in the growth of a developer?

bachelor’s degree: Developers can learn all facets of innovative implementations from the experts, who help them showcase their passion for their work by revamping, reviving, and reinvigorating their technology skills. Harnessing the power of networking with technical peers and speakers also allows them to handle any situation with confidence.