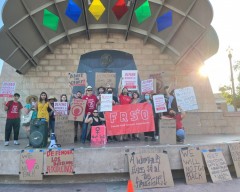 LA protest against attacks on reproductive rights. (Fight Back! News/staff)

Los Angeles, CA – On June 30, Freedom Road Socialist Organization-Los Angeles (FRSO-LA), along with Centro Community Service Organization (CSO Centro), rallied for reproductive rights in Boyle Heights. This event, held at Mariachi Plaza, was called as a demonstration in response to the Supreme Court’s decision to annul Roe v. Wade. Young members of the community came out to hear speakers from FRSO and Centro CSO expressing how this decision will affect women, the gender fluid, and anyone who may become pregnant.

Andrew Keith of FRSO-LA told the crowd: “This nation’s highest court has declared the right to terminate a pregnancy illegitimate. To that I say that the Supreme Court itself is illegitimate. We must no longer consent to an unelected body that has made it clear that it is hostile to us as a class, as a people. This court has vacated all moral authority and the only power to move forward must rest on the shoulders of us the people.”

Juliana Castellon of Centro CSO stated: “While in California there are laws to safeguard the right to abortion, my sisters in other parts of the country will not have that protection. Chicanas will not have control over their bodies or freedom to make decisions in the other regions of the southwest, in Aztlán.”

Cristal Haro from the CSO Center made an interactive work of art along with the recitation of an original poem called Sleeping Beauty. The artwork consisted of a chain wrapped around her waist that was connected to signs reading “Rape”, “Women are not your property”, “Patriarchy”, “Incest” and “Misogyny”.

Through her poem, Haro expressed how from a very young age women are taught to behave and be obedient and how society encourages young women to remain silent and deal with all the discrimination and injustice they face. She also explained how it is important now more than ever to teach our girls the importance of being brave and not being silent.

Luis Sifuentes from FRSO-LA spoke about the importance of getting involved and fighting for your rights. Sifuentes said: “We have to end this corrupt system! We have to create a system that is for the people managed by the people. We have to come together and keep fighting on all fronts: the police brutality front, the education front, and the immigration front.”

Storm Amaro of Centro CSO, a non-binary teen, stated: “Roe v. Wade is used as an umbrella case that provided a lot of rights and protections for a lot of people,” adding, “Some of these rights and protections include the right not to be prosecuted for miscarriage, the protection of LGBTQ+ parents from being discriminated against when trying to have children of their own, and to prevent women from being incarcerated for those who cannot carry their baby to term because they are on chemotherapy, have COVID, and any other life-threatening pregnancy.”

Sol Marquez of FRSO-LA closed the event by reminding us that the United States has forcibly sterilized countless oppressed nationalities and working class women for many years. “The forced sterilizations of undocumented women today have their roots in the treatment of Chicano women in the past,” Márquez said. “Chicanas had the highest number of sterilizations in the country. African-American and Puerto Rican women also suffered greatly from forced sterilizations. Puerto Rican women had the highest rates: every third of them were forcibly sterilized by the US government. On the one hand, this government will forcibly sterilize you, and on the other, it will deny your right to have children when and if you want them. The message is clear, our bodies are not ours in the eyes of this government!”

The event ended with a few more chants, a promise to keep fighting, and a group photo with the speakers.