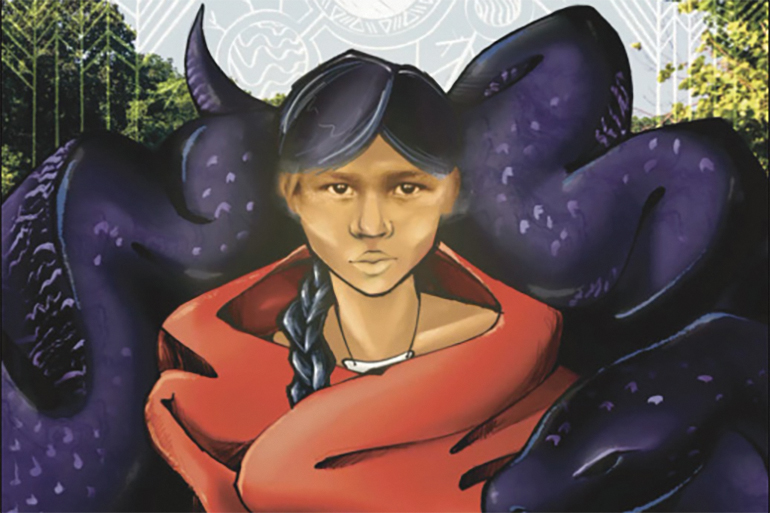 Growing up on the Catawba Indian Nation reservation in York County, South Carolina, Alex Osborn led a somewhat different life than those outside the reservation, though he didn’t realize it until he was older.

For example, he recalls that there was a Native American coordinator on staff at his elementary school, and much of his experiences with health care as a child occurred at Indian Health Service facilities.

“The Indian Health Service is usually run by military personnel, so there is only one form of bedside treatment. It’s not exactly the same,” she tells me. “Not only are they military, they’re not very friendly either.”

I’m speaking with Osborn in a conference room at the Center for Native American Studies at the University of South Carolina Lancaster, where he works as an assistant curator. Our chat followed Osborn’s appearance with three other Catawba artists in which they discussed the representation of Native Americans in the media after TV show screenings. Rutherford Falls Y reserve dogstwo recent shows that portray Native American issues in a way uncommon on American television.

Osborn says he laughed at a certain scene in reserve dogs that involved an Indian Health Services facility, as it could relate to the surreal vibe such facilities cultivate.

“[The military presence] he also mixes with a lot of people from the tribe who are employed there,” he explains. “So it’s this interesting mix of people who, I don’t want to say don’t care, but who aren’t that relatable, and then people who are very relatable, and sometimes it’s a funny mix.”

Osborn, a digital artist and painter, uses art to bridge the gap between reservation life and the outside world, as well as between generations. He is aware that his fondness for digital art is far from the pottery for which its people are best known artisticallyand that’s what makes it effective, he says.

“Personally, it’s appropriate for me to do modern art, but also to make a statement like, ‘I’m here now and I’m Native American,'” Osborn tells me. “We are not just in a textbook, we are not just a historical moment, we are a living culture that exists to this day and we have not has existed for 6,000 years to be relegated to existence in a textbook.”

Osborn gets the chance to tap into that connection with one of his recent works, “Sarii,” a portrait of Catawba Indian Nation icon Sally New River, who lived in the late 18th and early 19th centuries, which was unveiled in June as part of the Charlotte Museum of History Portrait Walk.

Osborn will join Catawba Nation archivist Ensley Guffey for a virtual panel discussion hosted by the museum on November 22 to explore the legacy of Sally New River and the importance of women in Catawba history.

An icon of the Catawba Nation

Sally New River was born in 1746 in what is now known as Nations Ford. Her grandfather was King Hagler, the leader of the Catawba from 1750 until his death in 1763. Not much is known about Sally’s early life, although it is believed that she was probably orphaned during the smallpox epidemic in 1759 and eventually settled in what was called New Town. .

New River assumed a leadership role in the tribe upon the death of his grandfather. She owned the 20,000 acres claimed by the Catawba Indian Nation in the late 18th century, helping to preserve and maintain them under the Catawba name.

He is also credited with helping grow the Catawba Nation after it dwindled to just 100 souls after a century of disease and displacement brought about by European settlers.

Alex Osborn said that he first learned of Sally New River in his teens and later realized its importance as he grew older.

There are no photos or artistic renderings of Sally New River from when she was alive, so Osborn had to use her imagination for the digital portrait. Using a collage style, Osborn used a great-great-grandmother’s photo of her as a child to portray New River’s eyes.

“The eyes belong to my great-great-grandmother, and the reason I did that is to figuratively paint a portrait of Sally New River as a historical figure, but not just the historical figure in the sense of someone who lived a long, long time. back, but also to connect with these people that we are literally connected to,” she explains.

Osborn used digital brush tools that resemble watercolors to paint and design around the eyes.

“It was great to paint around that, and then other elements of the portrait also focus on culture and protection,” says Osborn. “So like finding your culture, it’s wrapped up in a blanket, so we don’t fully know it, but we also want to protect whatever we have. And I think that speaks to my perception of her, because when I think of Sally New River, I think of my great-great-grandmother. I think about, like, this main figure.

“The blanket is to hide her because we don’t really know what she looked like,” he continued, “but it’s also like she took on this cloak of responsibility to lead our tribe further and literally to survive. She was trying to mix the literal and the figurative in there.”

The piece is also an example of Osborn’s exploration of digital art, which he uses to connect the present with the past in a purposeful way.

It’s a connection he learned while doing an artist residency at the Center for Native American Studies that ended in August, when he was offered his job as an assistant curator.

“What I realized was that my art is unique for now; it’s influenced by my culture, but it’s also meant to introduce things to people in a new way that I hope will make them interested in my culture as well,” he says. “So with digital representations of very old brands and work, I’ve always loved that mix of old and new. And then people might look at that and say, ‘Oh, what’s that?’ And then learn more about my people.”

Alex Osborn has been an artist from a young age, it’s only the media that has changed. Throughout his childhood, he played music, had a passion for drawing, and eventually turned to photography, collage, and digital design.

He recalls a Polaroid camera that printed photos that could be peeled off and turned into stickers in the 1990s as a tool that held special meaning to him as a budding creative. He attended the Special Talents in the Arts (ST-ARTS) summer camp at Winthrop University as a child, where he studied photography.

He still practices in that medium; he will be taking pictures in the Annual Yap Yêr Iswà Festivalplanned for the Catawba Cultural Center in Rock Hill November 19

Eventually, Osborn’s love of photography merged with his love of technology, and that’s how he began creating digital art.

Osborn identifies as pansexual, which means he doesn’t limit himself in sexual choice with respect to biological sex, gender, or gender identity, and he says art has been helpful in bringing him into that space.

While she has made subtle allusions to her queerness in her art, which can range from abstract illustrations to figurative renderings depicting members of her tribe, she wants to explore how to be more intersectional with her art moving forward.

“I want to make more art that is more explicitly queer, but I haven’t figured out how to do it in a public setting yet,” he says. “It’s not like in the closet or hiding something, I’ve alluded to some of that in some of my work in ways that aren’t very obvious, but it’s just that I want to put those things together and I haven’t exactly. I figured it out yet.

Another of his goals is to be more represented in the Charlotte art scene, both individually as an artist and collectively as a tribe. He says that he now sees Charlotte as a second home, since her partner currently lives in the city, and hopes that his new job at the Charlotte Museum of History could be a foot in the door.

“I love Charlotte as a city. Its beautiful. We have our issues, but I think overall we’re headed in a very good direction,” she says. “However, I would like to see more representation of my people there, because we were there thousands of years ago. So I think showing that we’re there now… we were there and we’re there, and I think it would be cool to show that. And then I also think there’s probably interest. I think there are probably people who want to see that too.”

Become a Nervous Member: Get better connected and become a member of Queen City Nerve to support local journalism for as little as $5 a month. Our community journalism helps you get informed through a variety of diverse voices.