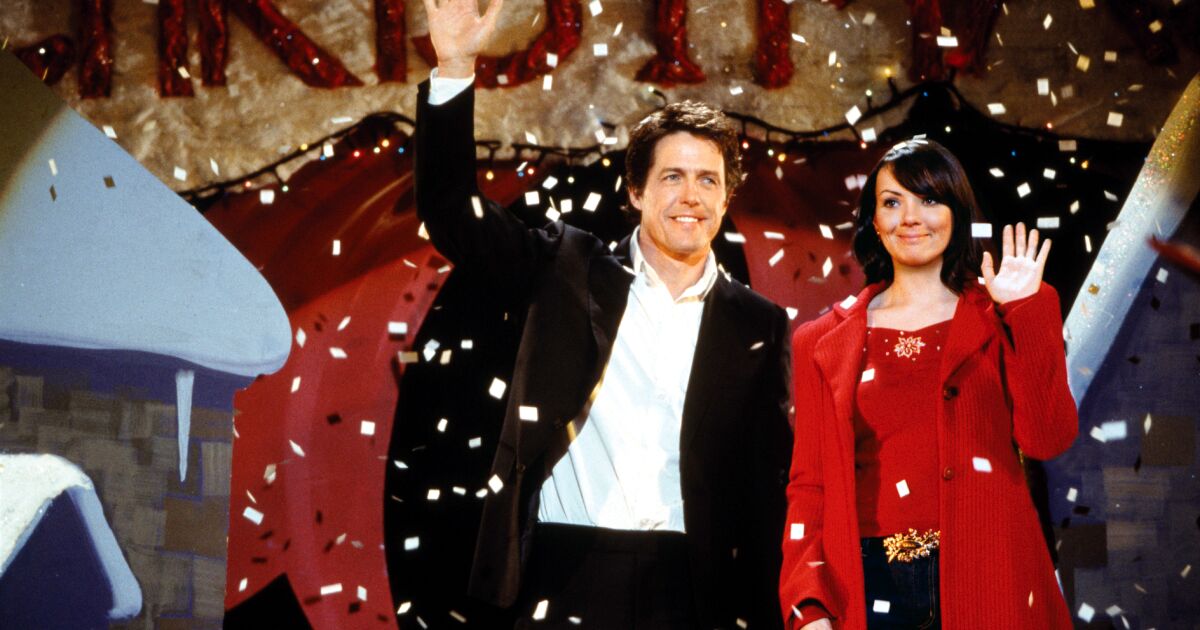 get complete details of Column: ‘Love Actually’ is like a fruitcake: love it or hate it (and I choose love), it’s here to stay

It’s the most wonderful time of the year again, when, a month before, Michael Bublé breathes Christmas tunes down the neck of every supermarket shopper, the local Christmas tree sprouts from the mulch of the local pumpkin patch, and people begin to greet very hot about “Really Love”.

For some, Richard Curtis’ sweet 2003 rom-com collage is such a sacrosanct piece of christmas canon like “It’s a Wonderful Life”, “A Christmas Story” or “Elf”. Memes and TikTok versions of iconic movie moments abound. In 2017, a 17 minute sequel helped raise millions for “Red Nose Day”; One year later, “love actually livesbegan his annual vacation run.

On Tuesday, Diane Sawyer organized a specialI titled it “Laughter and the Secrets of ‘Really Love’ 20 Years Later,” in which we found out, among other things, that the notoriously grumpy Hugh Grant didn’t want to do the memorable dance number and the casting of Bill Nighy as aging rocker Billy Mack was a happy accident.

For others, however, “Love Actually” represents everything that is wrong with Christmas, cinema, Britain and, quite possibly, humanity itself. Over the years, Grinchy critics have expressed bewilderment me outrage over the enduring popularity of the film. It has been noted for the whiteness of its cast, the confusion of its plots, the superficiality of its characters, and the fact that many of the relationships involve men in power and the women who work for them.

In 2018, Stephen Marché wrote an essay who seemed to blame “Love Actually” for Brexit.

so intense and often hyperbolic criticism it proves the film’s place in the culture even more definitively than the accolades, though the accolades grow more plentiful with each passing year. Who would have thought that a movie that got only average to medium reviews when it premiered it would end with a live musical experience and a Diane Sawyer special?

I remember watching “Love Actually” on a double date at the cineplex, mostly because my husband capitulated to majority rule despite having seen the movie twice. (I think he was writing a profile of Curtis).

For a man who is not a big fan of romantic comedies and who, until “A Very British Scandal,” actively avoided anything starring Hugh Grant, this was the most sincere act of love any spouse could hope for, which only proved the point of the movie: love Really it is all around us.

I don’t remember exactly when “Love Actually” officially joined the holiday canon, though I do remember discussing it with Curtis in 2011 (when “War Horse” debuted), and he was pleasantly surprised.

But ours is now a loyal “Loving Reality” family and has been for years. It’s the first movie my oldest daughter and I watch when we take over the living room to wrap Christmas presents; then we see him again with the rest of the family.

While watching the opening scenes in preparation for this column, both my daughters expressed outrage: “Are you watching ‘Love Actually’ without us?”

Like it or not, “Love Actually” has become an essential ritual of the season. And as with any seasonal ritual, from ugly sweater contests to arguments over canned or homemade cranberry sauce, its emotional power has as much to do with personal or family history as it does with the movie itself.

Repeatedly watching any movie can dig out its flaws; I love “It’s a Wonderful Life,” but I hate how George Bailey’s decision to marry Donna Reed’s Mary automatically means giving up his dreams to be stuck in Bedford Falls. (Why couldn’t they both travel a bit?)

Even within the very elastic confines of its mini-portrait format, “Love Actually” has more than a few problems. As Curtis himself pointed out to Sawyer with some disgust, three of the storylines portray men getting involved with women in very subservient positions (two secretaries and a house cleaner). One, involving a British man who travels to America to seek sex because British women are so cold, seems straight out of the “Dear Penthouse” letters, while Billy Bob Thornton’s portrayal of a sexually harassing US president predator is tantamount to an act of war. .

But it doesn’t matter. At least not in our house. The film’s sweeping understanding of love in all its gloriously flawed forms is exactly what the season calls for. We all know how absurd and maddening something is (no thinking person would consider Martine McCutcheon’s Natalie chubby), but that doesn’t make up for the pleasure of the moments we love.

Laura Linney telling her grieving brother that she is “free as a bird”. alan rickman trying to buy a gold necklace while Rowan Atkinson gives her a hard time. Keira Knightley
bringing Andrew Lincoln cakes. Andrew Lincoln’s luscious body language after revealing his crush on Keira Knightley’s character (forget the famous poster scene; this may be my favorite part).

Liam Neeson at his wife’s funeral. Colin Firth stumbling upon his adorably monolingual way through the blossoming relationship with Lúcia Moniz’s Portuguese-speaking Aurelia, especially the scene where he jumps into the pond and is scared by the eels.

As you can see, it’s a Homeric list. Despite the story’s surrender to sentiment, the dialogue is witty and sharp, delivered by a ridiculously talented cast that goes on for days. It is Chiwetel Ejiofor wasted? Yes it is. Would more diversity have made the film more representative of modern Britain? Yes, as Curtis also admitted to Sawyer, he would.

“Love Actually” was never going to land on any of the Top 100 lists of all time, but that’s not the point. Like the holidays themselves, many movies in the season’s canon are a bit of a mess, but we overlook the flaws because the good things connect us and remind us of the happy times of other years.

Some of these staples: “A Christmas Carol” with Alastair Sim; “It’s a wonderful life,” “Elf,” “die hard”, “Silver Linings Playbook” and the animated film “How the Grinch Stole Christmas!” – are legitimate film standouts. The rest endure because they do what we need them to do at the holidays: join us on an emotional journey of laughter, tears, nostalgia, hope, and hopefully a magical snowfall or two.

And maybe give us something to discuss that doesn’t involve politics.

So the “Love Actually” haters can scream all they want, but the rest of us will still laugh, cry, quote, and dance at every sublime and ridiculous moment. Because the ritual is important and this is one of ours.

And I, for one, don’t think it has anything to do with Brexit.