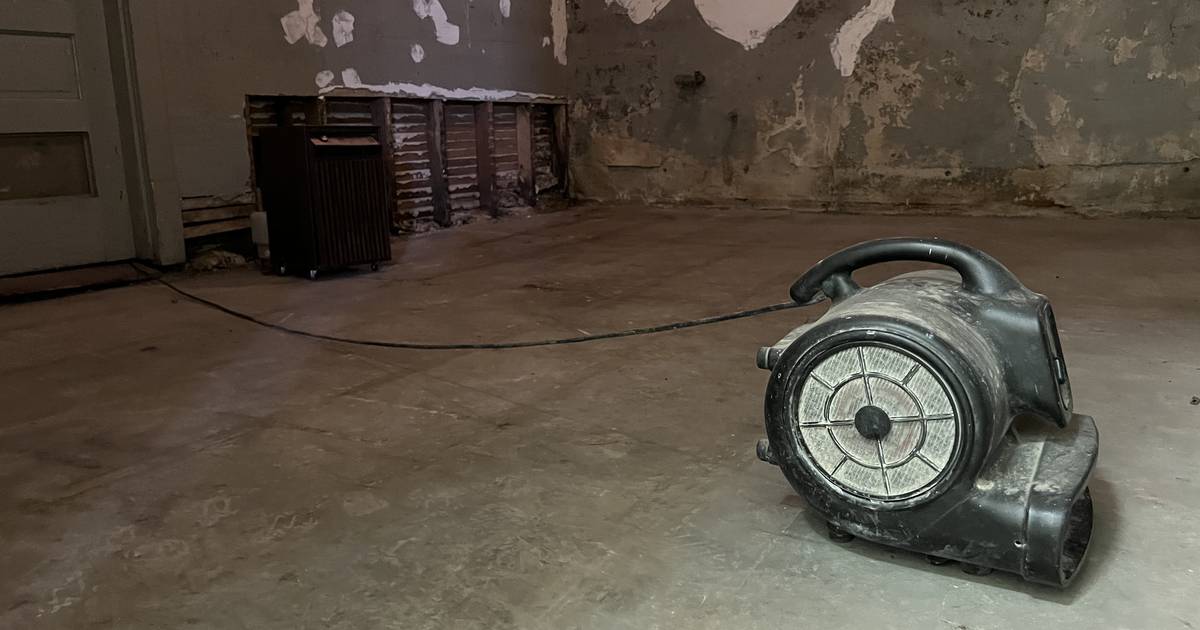 DeKALB – The DeKalb Area Women’s Center is dealing with thousands of dollars in expenses after excess storm water seeped into the basement of its building during a storm this month.

Anna Marie Coveny, leader of the women’s center, said the rain fell so hard in such a short time that it overflowed storm sewers, even with two rain gardens in front.

Coveny said a Zumba instructor was the first to discover what was then 7 inches of standing water in his basement. By the time Coveny arrived with the help of plumbers and their water pumps, the water had already receded, but the damage to the bottom of the 105-year-old building and many of the items stored there had already been done.

At the time, everything was damp and Coveny said some things were actually soaking wet, so exhaust fans and dehumidifiers were brought in to prevent mold from growing. Now Coveny is worried that the center has a huge electricity bill.

“We have no way of estimating what that is, but running 30 air movers and three dehumidifiers day and night is going to be a huge electricity bill. So that’s part of what we need to do to raise funds,” Coveny said.

As for expenses, the DeKalb Area Women’s Center so far owes $4,050 to Service Master Commercial Cleaning Services, but the responsibility doesn’t end there.

“We really need to dig a sump pump hole and install a sump pump with an ejection system that will get the water out before it can spread out on the floor again,” Coveny said. “I think it will be months before that happens and again we have to find out where the money is coming from because I am not willing to write a bouncing check.”

Coveny said the DeKalb Area Women’s Center expects to receive $1,250 in emergency grants from the DeKalb County Community Foundation. As of August 24, the center also received two donations from members of the organization, each of whom contributed $300.

Over the past few weeks, Coveny estimates the center has been honored with volunteers more than two dozen times. Most of the work done by those volunteers so far has involved pulling water-soaked items out of the basement and out into the sun to dry. Everything from dilapidated filing cabinets and furniture to the building deed and old hallway plans needed to be pulled out and sorted.

Lisa Shelton, who works with Safe Passage in DeKalb, said she left when she heard the center needed help. Shelton said a lot of people go out and help Safe Passage, so she likes to match those efforts by going out and helping where she can, too.

“I’m no stranger to flooding,” Shelton said. “I grew up in a house that was flooded a couple of times, so it’s nothing I haven’t seen before, but we definitely need all the help we can get. That would be very useful.”

Shelton said that considering the building is more than a century old and the women’s center has occupied it for nearly three decades, there is a lot of historical value in some of the things that were affected by the flood.

“So the sooner we can get it out of the mold and dry it out a bit, hopefully something can be saved and preserved,” Shelton said.

Ann Mueller, another volunteer, said she supports the center. Since she is retired, she had time to help when the call for volunteers went out to the community.

“It’s important to have a space like this, so I really appreciate the work they do here,” Mueller said.

“It is quite upsetting to have so much damage done and so much work to be done to restore this wonderful historic building,” Mueller said. “I’m happy to do what little I can do.”

Michelle Perkins said she volunteered because she believes the DeKalb Area Women’s Center is a great organization with a great cause.

“For me, as a tree lover, the hardest part was seeing all the trash,” said Perkins, who has volunteered twice since Aug. 24. not just putting things in landfills, so it’s always just, it’s just devastating.”

She announced to her fellow volunteers as they cleared the space.

“No. 1 the physical labor and what you have to spend to do this, to clean up, it’s unbelievable, and that’s just the beginning. Just getting damaged goods out, let alone putting them back together,” Perkins said.

Perkins, a lifelong DeKalb resident, said she had always heard of the women’s center but had no involvement with the organization prior to her volunteer work last week. She said that it feels good to be involved.

“Any time you work with an organization like this, there’s funding, donations and even skills, if someone can donate skills, that’s always appreciated,” Perkins said. “Any kind of disaster like this just cripples organizations, so please be careful, be kind and give back.”

Moving beyond the flood

Considering all the flooding issues, the DeKalb Area Women’s Center continues to host its weekly open house on Fridays from 7 to 9 pm, Coveny said. Except for a series of sign making and collage workshops, the regular programming during those Friday night events has become a time to do more work related to flood damage.

Coveny said areas where carpet used to adorn the center’s basement floors will not be replaced due to the risk of another flood in the absence of a sump pump. But she hopes some of the original hardwood in the basement can be salvaged.

The center also gives away winter clothing on the Saturday before Thanksgiving. Despite the flooding, that event is still expected to play out normally in two and a half months.

“That’s my goal, that we no longer have the musty smell for the coat drive,” Coveny said. “And it’s really a rewarding experience to do that,” said Coveny, who noted that the clothes are given to anyone who shows up, no questions asked.

“I would like people to know that our mailbox is open for checks,” Coveny said.

She said anyone interested in helping with flood recovery can send a check made out to DeKalb Area Women’s Center, 1021 State St., DeKalb IL 60115.