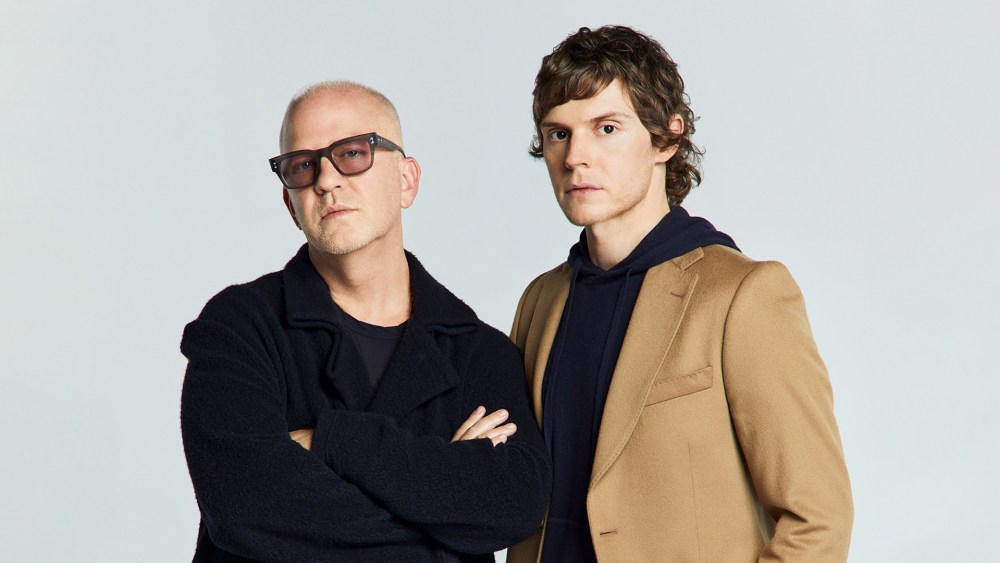 “Who in this room has bought the new Taylor Swift album?” that is what ryan murphy he asks Variety studio, filled with our photographer and art director, his publicity team and Evan Peters, with whom she poses for the session. The mood is light: “I feel like Dracula,” Murphy laughs at one point as they seamlessly enter the shot together, proof of how comfortable they are together.

The ambiance is an exact contrast to the set of “Dahmer — Monster: The jeffrey dahmer History,” they tell me during the interview later that day, oddly enough, held on Halloween.

“You could hear a pin drop on that set. We all feel: ‘We’re here to work on very difficult material. We are here to answer very difficult questions about homophobia, systemic racism, white privilege.’ When Evan would walk on the set or when Niecy Nash would walk on the set, he was very churchy in a weird way,” Murphy recalls. “Sometimes you do a show, and we’ve certainly done this, you’re doing a show about witchcraft and you talk about donuts or Taylor Swift. There was not any of that.”

In fact, Peter stayed in character, focusing on the serial killer who murdered 17 boys and men between 1978 and 1991, during most of filming. “It was terrifying,” Murphy admits.

“Evan was going home, and it wasn’t like he was rocking back and forth in his bedroom, which I think people assume. He had a life, albeit a restricted and devoted one. It was like running a marathon. If you run a marathon, you eat a certain way. You sleep a certain way. It was a very athletic approach to acting,” says the creator, who constantly checked on Peters throughout filming and had open conversations about mental health. “There were moments where I felt like a father who has a son who is in the Olympics. You say, how can I help you?

Peters notes that it was “difficult but worth it” to stay in character to tell the story and get the message across.

But they both knew it wouldn’t be easy; in fact, Murphy hesitated before sending it to Peters because he knew he could do it, but he also knew how intense it could be.

Looking back, while Murphy admits that “there were some dark days” and Peters kept to himself for the most part, he couldn’t imagine another actor putting on “120%” like Peters did.

And while the duo have worked together on 10 projects, beginning in 2011 on the first season of “American Horror Story,” “Dahmer” wasn’t an immediate yes for Peters.

“It was a real fight. I was really thinking about it and trying to process it. I was back and forth a lot,” she says. Ultimately, it came down to working with Murphy again, someone he trusted and knew he understood his process.

“I knew you’re an amazing support system and I trust you and there’s an honesty there,” she tells Murphy. “I knew that with the goal in mind to finish this as strong as I started it, you would create a great safety net. If I fell, I could get back up and we could finish this. I was up for the challenge.”

Similar to his mental transformation, Peters also had to physically change quite a bit over the course of filming; she went on a no-carb, no-sugar diet to lose 15 pounds at first.

“I really had no appetite during the early stages of shooting,” he says. “Then he was working out for episode 3 when Dahmer starts working out and he gained about 20 pounds only to end up in prison to show what he looked like back then.”

When they were done, the year-long editing process began. For the first time, Peters was an executive producer, reviewing every take.

“I would advocate for the other actors, and a lot of those scenes would change based on your observations as an actor and a producer,” says Murphy. “He stayed in it for a long time and dedicated himself. This is something very heavy to keep reliving it ”.

The work did not stop until the program came out. They did no marketing or publicity for the series, which Murphy says was because the material was too heavy. Critics did not receive episodes early. Nobody knew how it would work.

Four years into Murphy’s five-year, $300 million contract with Netflix, it quickly became his biggest hit, with over a billion hours watched during the first 60 days.

That popularity came with a backlash. Family members of Dahmer’s victims spoke out, upset that they were not involved; Murphy says that the reached about 20 families but never heard back. Therefore, she relied on his “very large investigative staff”, which he worked around the clock for 3.5 and a half years.

“I was never interested in Jeffrey Dahmer, the monster. I was interested in what he did. I think the fact that all the characters in this are seen as real humans makes some people uncomfortable. I get it and I try not to have an opinion on it,” he says. “We always try to center everything on the victims.”

One person the “Dahmer” team did not contact was the killer’s father, Lionel, played by Richard Jenkins on the series.

“I have done many biopics. It’s almost like you’re being a reporter; I always try to maintain a place of neutrality. I think we were telling a very specific story,” he says. “I think Lionel has told the story of him. This was not that story.”

When the show premiered, Netflix listed it under the LGBTQ label, which until now was used to tag uplifting stories about the community. After significant backlash, the tag was removed.

“I think he got the tag, one, because of my involvement. I’m a gay man, so most of my stories are about some kind of LGBTQ issue and I do it selfishly; when i was little i had nothing [to look to]Murphy explains. “My mission statement has been to talk about those stories and those characters and dig up the buried history.”

Murphy understands why people weren’t happy with the label: “A lot of people in the community want to cheer up. I get it,” he says, but disagrees.

“It’s about homophobia,” he adds. “I have a saying: ‘My job as an artist is to hold a mirror up to what happened.’ It’s ugly. It’s not pretty. Do you want to look at it? If you do, watch it. If you don’t, look away, and sometimes some of this outrage is directed at the mirror frame rather than the reflection. I’m trying to say, I really understand why you’re upset about the inclusion of that. I get it, but I also personally disagree.”

After such heavy lifting, both Murphy and Peters aren’t sure what’s next… or so they say. Seven days after this interview was completed, “Monster” It was renewed for the second and third season.. While Murphy couldn’t be reached for comment on what that looks like, it doesn’t sound like Peters is going to jump in to be a part of it.

“I’m going to take a little break from the darker roles and explore the light,” he says. “It would be interesting for me to play something that’s a little closer to home, a little more mundane, and explore the details of those kinds of experiences.”

Murphy also claims he wants some time to himself, which may be difficult now with more “Monster,” “Feud” and “The Watcher” on the way.

“Until now, I always had a response of ‘I want to do this’ or ‘I want to do that.’ I feel that with what I have been lucky enough to do, I feel very happy. I have no interest in continuing on that treadmill that I’ve been on for a long time, so I’m going to get off. I am interested in not knowing,” she says. “My day has always been in 15-minute increments, and that doesn’t interest me anymore. I bought a farm. For some reason, I’m much more interested in chickens and daffodil bulbs. I am interested in a different part of my life. For the first time I am relaxing and not looking to do anything.