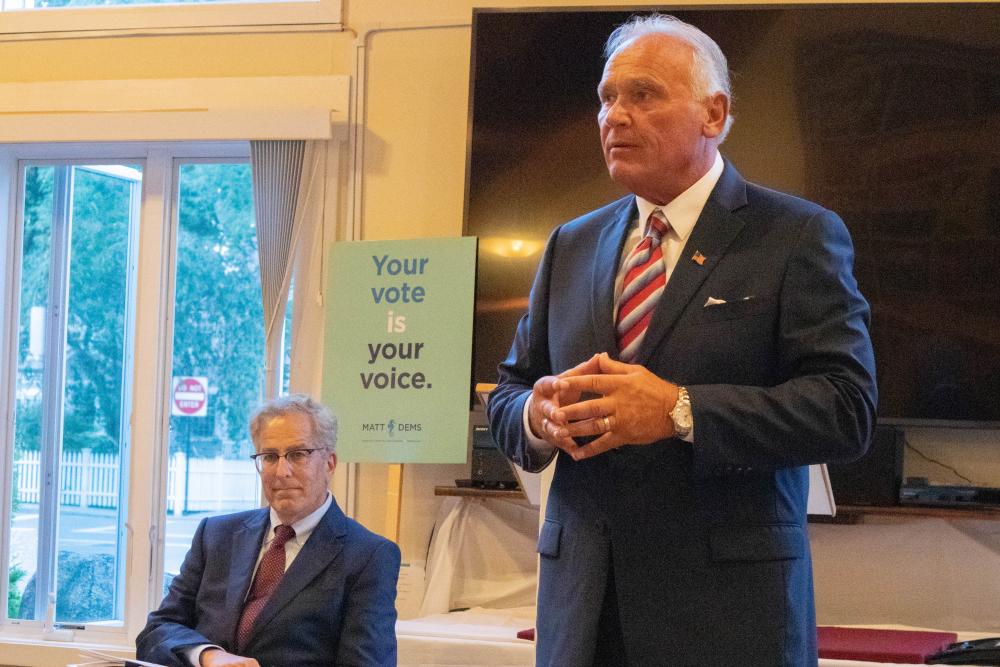 MARION — The community hall at St. Gabriel’s Parish in Marion was packed Tuesday night as Democratic Party voters gathered to learn their options for this fall’s election. The candidates expressed their opinions on education, state and county spending, green energy, and criminal justice.

The event was organized by the Democratic City Commissions of Marion, Mattapoisett and Rochester and was moderated by Mike Cambra, chairman of the board of the Rochester Council on Aging.

Headlining the night were Bristol District 10 Representative candidates incumbent Rep. Straus (D-Mattapoisett) and challenger Richard Trapilo. According to Straus, this was the first time the two men had met.

Trapilo, a first-time candidate, emphasized his history as a New Bedford businessman and his status as a political outcast.

Straus pointed to his experience and track record over nearly 30 years in the role. He mentioned his support for “Romneycare,” a 2006 health care reform law passed in the state, and his efforts at South Coast Rail.

“I want to tell you a little bit about myself and what a great job I think I’m doing,” Straus said. “I work hard, I relate to people, I am positive and I also look for solutions.”

On several key issues, both Straus and Trapilo agreed.

Both expressed their support for the right to abortion.

Trapilo said he supports the right to abortion, “in the case of incest, rape or the health of the mother.”

Straus said a woman’s decision to have an abortion is between her and a doctor.

He received a standing ovation and called Trapilo’s stance “a step backwards for the state.”

Both supported the right of adults to choose euthanasia and later agreed that their district and the state should invest in wind and solar power.

Candidates were asked to address critical race theory and LGBTQ+ issues in schools.

Trapilo said the nation’s youth are the future and a strong education begins at home. He called for an increase in Chapter 70 funding for schools across the state.

Straus said he would not support any laws like Florida’s, referring to Florida’s “Parental Rights in Education” bill, commonly known as the “Don’t Say Gay” bill. The bill says that teachers cannot instruct on sexual identity from kindergarten through third grade. Instead, he emphasized his support for Massachusetts teachers and administrators.

Neither candidate addressed Critical Race Theory in their response.

“We call ourselves ‘Taxachusetts’ for a very given reason,” Trapilo said, adding that the state’s $1.8 billion surplus should be back in the hands of voters.

Although they often traded barbs, with Trapilo accusing Straus of being a “part-time politician” and Straus responding, asking Trapilo if he “was in the right primary,” both candidates shook hands before bidding farewell.

See also  Peace to the cabins! War on the palaces! Is Sri Lanka experiencing mob justice or a coup? - JURIST - Comment

“I don’t know if I necessarily want this job,” Hall said. “I think that’s what they called me for.”

This fall’s election will be the first time Hall has been on the ballot. Previously, she worked as an Assistant District Attorney for Suffolk County and as a member of the ACLU.

“I want to convey a message about how to bring back the spirit of justice,” he said. “For too long, we have seen too much injustice in the criminal legal system.”

Hall proposed that through community engagement and clear policies, he would bridge the gap between the district attorney’s office and the immigrant and minority communities.

He said that as district attorney, he would focus on racial justice, starting with collecting and analyzing data on racial issues in the criminal justice system, saying, “we can’t manage what we don’t measure.”

In response to questions about public safety concerns, he said people need to “move away from the binary” that progressive policies equate to increased crime.

“Ladies and gentlemen of the jury,” said Hall, who drew on his experience as a prosecutor, “I hope that, based on all the evidence presented tonight, I am found guilty of being the best candidate.”

While the candidates for other offices focused on different policies, the county commissioner candidates discussed bigger changes.

Both da Silva and Bezanson emphasized the importance of transparency in their office. Both are running to replace County Commissioner Chair Sandra Wright.

Bezanson supported having a consistent meeting schedule that was in line with other city and town agencies throughout the county. He said that he would meet regularly with municipal leaders.

“ME [will] bring all stakeholders to the table,” said Bezanson, who highlighted the importance of working together as a region to benefit everyone in Plymouth County.

Da Silva appealed to his roots as an immigrant and outsider to the political system. He promised that he would work equitably with every town and city in Plymouth County.

He said that whatever happens in his hometown of Hingham or Brockton would also happen in Marion, Mattapoisett and Rochester.

Ultimately, the decision will be up to the voters.