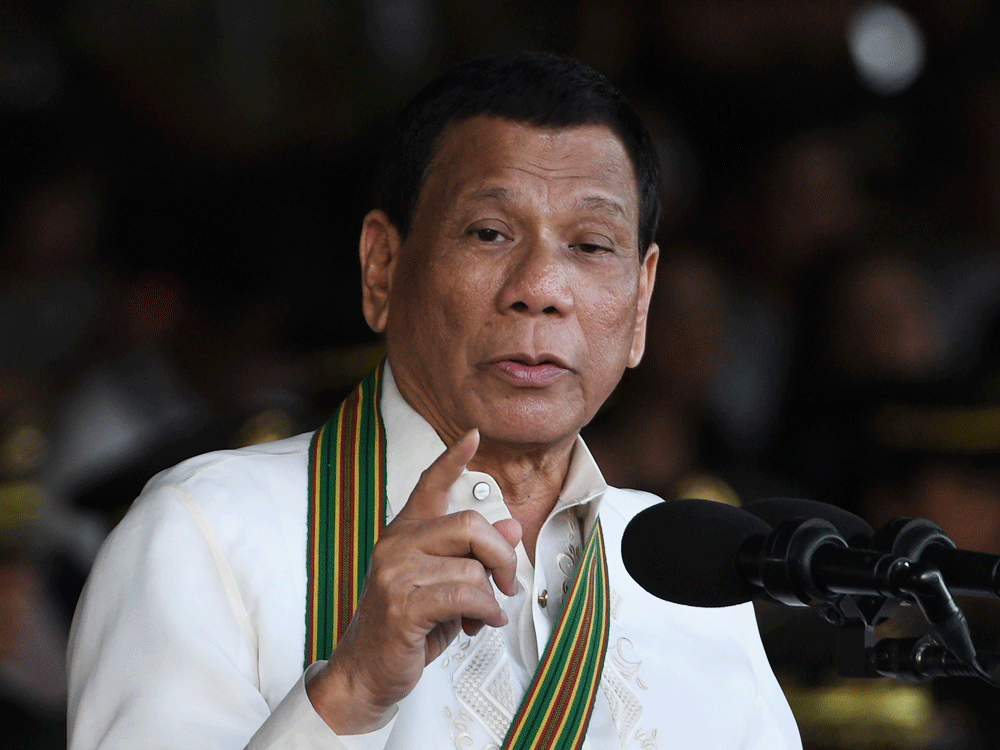 MANILA, Philippines – Philippine leader Rodrigo Duterte has faced frequent accusations of sexism for his profanity-laden speeches with crude rape jokes and other offensive remarks toward women.

He once kissed a married woman in front of thousands of well-wishers, saying she could tell her husband it was a joke. Last year he admitted to sexually assaulting a sleeping maid when he was a teenager.

Now, the president has left many here scratching their heads after he signed a new law banning wolf whistling, hissing, and telling sexual jokes in public, among other forms of harassment. Penalties include fines and imprisonment.

The law extends to public leering, intrusive staring, stalking, and unwanted exposure, as well as online comments. Requires bars, restaurants, movie theaters, and other businesses to post signs that include a hotline number for reporting sexual harassment.

Duterte’s spokesman told reporters on Tuesday that the president recognized the need for anti-harassment measures and would “be the first to obey” the new law, known as the Safe Spaces Law. He added that Duterte sometimes told lewd jokes because he wanted to make people laugh.

The irony that the Duterte government passed such legislation was not lost on women’s advocates, who have been among the most prominent critics of the fiery leader.

The president “represents the most brazen violator of the intent of the law with his basic macho-fascist comments,” the Gabriela Women’s Party, a left-wing political group, said in a statement. The implementation of the law under the Duterte administration would be “certainly challenging,” the group added.

“Duterte is the misogynist in chief,” said Inday Espina-Varona, a journalist and founder of the #BabaeAko, or I am a woman campaign.

“While this is a law that is long overdue, his signing only proves the truth: he believes he is above the law.”

Duterte signed the law in April, but officials only released a copy of the law on Monday.

The measures were introduced by opposition Senator Risa Hontiveros, who said on her Facebook account that Filipinos should report sexual harassment.

Duterte ‘will be the first to obey’

“The law is only as good as the way it is implemented. We need to test the law and make sure it serves its purpose,” he wrote. Hontiveros was not available for further comment Tuesday.

The Philippines ranked eighth among nations for gender equality last year, according to the World Economic Forum’s Global Gender Gap Report. But women’s advocates say the country still lags behind in key areas: Abortion is illegal and longstanding efforts to legalize divorce have met with resistance from some lawmakers and the Catholic Church.

Duterte, best known for a war on drugs that has left thousands of Filipinos dead, has made many controversial statements about women since taking office in 2016. His jaw has dropped at the legs of Vice President Leni Robredo, he has told soldiers shooting female guerrillas in the vagina and joked about the rape of an Australian missionary who was murdered in 1989.

“As long as there are many beautiful women, there will be more cases of rape,” he said in a speech in his hometown of Davao last year.

When the Swedish ambassador in Manila criticized Duterte’s language last week, the president’s spokesman responded that foreign audiences “may not be as accepting” of Duterte’s humor as Filipinos.

“The good envoy of Sweden should judge the president not by his words but by his deeds,” spokesman Salvador Panelo said. Duterte has appointed women to government posts and passed laws in favor of women, he added.

The new Safe Spaces Law corrects a previous legal restriction that only recognized harassment when it was committed by superiors towards subordinates.

Still, Duterte need not personally worry about the scope of the new law, at least not yet. As president, he has immunity from prosecution during his six-year term.