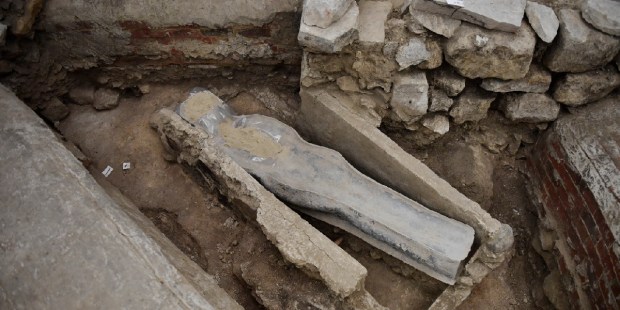 One of the two sarcophagi found after the Notre Dame de Paris fire in 2019 belonged to a 17th-century cleric, but the other is more mysterious.

A team of French experts has identified the remains inside one of two sarcophagi discovered beneath Notre Dame de Paris after the April 2019 fire. While the name of the deceased inside the second sarcophagus still eludes them, the team has reduced the station of the man and they believe that his burial in the cathedral occurred around the 15th century.

Aleteia previously reported that the two sarcophagi were discovered while construction crews were examining the floor after the fire. The floor had to be considered strong enough to support the beams needed for the rebuilding effort.. After their discovery, work was halted for a while while a team of archaeologists excavated the tombs.

the guardian informs that the first sarcophagus, found just eight inches below the ground, belonged to Antoine de la Porte. Porte was the canon of Notre Dame Cathedral and died on Christmas Eve, 1710, at the age of 83. While the lead sarcophagus was flexible enough to be punctured, causing oxygen to degrade the organic material it contained. the team was able to examine the cleric’s bones, hair and beard, which remained intact.

Antoine de la Porte was easily identified thanks to a bronze plaque on the sarcophagus bearing his name. Experts said her remains suggest she led a somewhat sedentary lifestyle and took special care of her teeth.. Historically, de la Porte was known as a wealthy and influential figure, who was a great patron of the arts. Some of the artwork he commissioned is still on display today at the Louvre.

De la Porte was also known for renovating the choir at Notre Dame Cathedral, which cost a staggering £10,000 (over $2.6 million today). This also explains why his remains were found together with pieces of the original cathedral choir screen, which were used to build his tomb.

The second sarcophagus is giving the team a bit more trouble identifying, not only because there was no name plate, but also because it’s older than the first. Found several feet below Antoine de la Porte, this sarcophagus was also made of lead and was also penetrated underground. Oxygen seeping in over the centuries has decomposed much of the remains.

Still, the team was able to identify that “the gentleman,” as he is called, was a young man of the aristocratic class just from the fact that he was buried inside the cathedral. Scientific Alert Notes his remains showed that his teeth were in particularly poor condition, in contrast to de la Porte’s teeth, and they suspect he suffered from a chronic condition that accelerated his decay. In addition, his skull showed signs that his head had been bandaged to deform and elongate the skull, which was a practice of some medieval aristocratic families.

The Guardian has comments from Christophe Besnier, head of the excavation team of France’s national archaeological institute, Inrap:

“If the date of his death was around the second half of the 16th century or the beginning of the 17th century, we may be able to identify him in the death register we have. If it’s before that, we’ll probably never know who he was.”

Read more about Inrap’s fascinating exam results in the guardian.