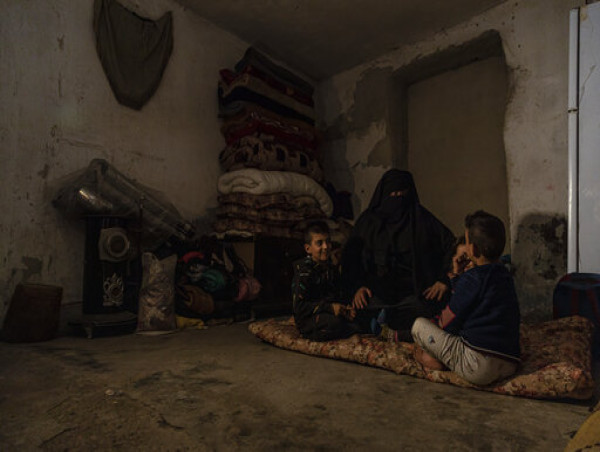 RAQQA, Syria (AP) — Marwa Ahmad rarely leaves her dilapidated home in the Syrian city of Raqqa. The single mother of four says people look at her askance and refuse to offer her a job, while her children are harassed and beaten at school.

She and her children are paying the price, she says, because she once belonged to the Islamic State group, which invaded a swath of Syria and Iraq in 2014 and imposed radical and brutal rule for years.

Ahmad is among tens of thousands of widows and wives of Islamic State militants detained in the squalid and lawless al-Hol camp in north-eastern Syria after the US-led coalition and Syrian Kurdish forces ousted the region’s Islamic State in 2019.

She and a growing number of families have since been allowed to leave, after the Kurdish authorities overseeing the camp determined they were no longer affiliated with the militant group and posed no threat to society. But the difficulties they face in trying to reintegrate in Syria and Iraq show the deep and bitter resentments that remain after the atrocities committed by Islamic State and the destructiveness of the long war that wiped out the militants.

Near Ahmad’s home, an Islamic State slogan, “The Islamic Caliphate is coming, God willing,” is painted on the wall of a dilapidated building.

It is an ideology that Ahmad once believed in. She said she and her sister joined Islamic State after her brother, an Islamic State member, was killed in a US airstrike in 2014. She married a member of the group, though she says she he was a nurse. not a fighter He has been detained since 2019.

Ahmed says he now rejects IS. However, her community does not believe that, and she claims it is because she wears the conservative niqab veil that covers most of her face.

“Now, I have to face people, and many of the people in this society have been hurt by (IS),” Ahmad said. “Of course, it wasn’t just the organization that did it. We, the people who live in Syria, have been hurt by the Free Syrian Army, the regime and IS, right? But they don’t say that.”

She says that the neighborhood bakery sometimes refuses to give her bread. Even her own father, who did not approve of her joining the extremist group, threatened a store owner who employed her with accusing him of communicating with Islamic State if he did not fire her from her.

After ISIS invaded Raqqa, much of northern and eastern Syria and western Iraq in 2014, the group declared a so-called Islamic caliphate over the territory. Thousands came from all over the world to join. Raqqa became the de facto capital of the “Caliphate”.

The US-backed Kurdish-led authorities fought for years to push back IS. Finally, in March 2019, they captured the last sliver of Islamic State-controlled territory in Syria, the small town of Bahgouz. Ahmed’s husband was captured by the SDF in Bahgouz, and Ahmed and his children were sent to al-Hol camp.

Since then, what to do with the women and children in al-Hol has been a puzzle to the Kurdish-led authorities. Most of the women are wives and widows of IS fighters. Thousands of Syrians and Iraqis have been released and sent home, as well as several foreigners.

Still some 50,000 Syrians and Iraqis, half of whom are children, remain crammed into tents in the fenced off camp on a barren strip of desert. Several thousand foreigners from dozens of countries also remain.

The conditions are terrible. Kurdish-led authorities and activists blame Islamic State sleeper cells for increased violence inside the camp, including the beheading of two Egyptian girls, ages 11 and 13, in November. Ahmad says life in al-Hol was similar to life under ISIS, “except you’re fenced off.”

Kurdish-led forces announced Thursday, citing an increase in Islamic State attacks, that they have launched a new military campaign against the extremist group, dubbed “Operation Al-Jazeera Thunderbolt,” to target sleeper cells in al-Hol. and in the vicinity of Tal Hamis.

Despite all this, Ahlam Abdulla, another woman released from al-Hol, says that life in the camp was better than in her hometown of Raqqa.

“In general, the whole world is against us. They fight us wherever we go,” she said. She says her husband joined IS and worked in an office for the militant group, while she just took care of the house.

With the support of her tribal elders, the mother of five returned to Raqqa in 2020 without her husband, who has been missing for four years. She says that local authorities have watched her every move with suspicion and have asked for her personal information.

“We are afraid,” he said. “If anyone asks, I just say that my husband died on the Turkish border.” She doesn’t tell anyone that she was in al-Hol.

Saeed al-Borsan, an elder from the al-Walda tribe, says the reintegration of women and children from al-Hol has been a great challenge, both because of a lack of job opportunities and because residents struggle to accept them. Tribal elders like al-Borsan have been trying to help the women find housing and livelihoods.

“The children especially have faced difficulties, lack of education and disconnection from society for five years,” he explained, sitting in a room with other members of the tribe with a rosary in one hand. “They are victims.”

Local charities and civil society groups have tried to help the children re-enter schools and help their mothers improve their skills to find better jobs.

“They remained under the rule of the Islamic State, and many of them are still relatively influenced by it,” Helen Mohammed of Women for Peace, a civil society organization that supports women and children, told The Associated Press. “They were victims of extremist ideology.”

But she believes that women can successfully reintegrate with the right services and support.

Abdulla says that he attended a few workshops, but feels that his job prospects have not yet improved. Meanwhile, he earns a little by cleaning rugs and houses and selling traditionally packaged dry or pickled seasonal food, known locally as “mouneh”.

Meanwhile, Ahmad was turned down from another job. She said that she did not get a clear reason why, but she believes it is because her husband was with IS.

“We have to live with the IS label in this society,” Ahmad said as he let his children out of their dark house to play. “No matter how hard we try to be a part of this community, hug people and be nice to them, they still look at us the same way.”