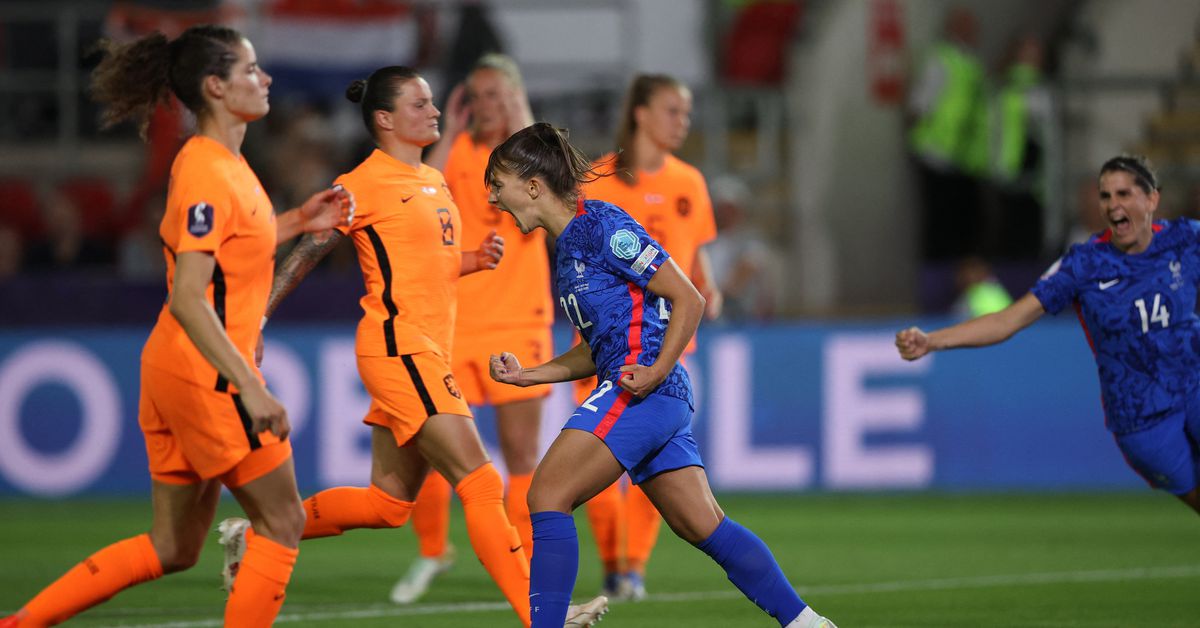 ROTHERHAM, England, July 23 (Reuters) – France defender Eve Perisset scored an extra-time penalty to beat defending champions the Netherlands 1-0 on Saturday and reach the semi-finals of the Women’s European Championship for the first time. where they face Germany.

France, whose last three European Championship appearances ended in the quarter-finals, desperately looked for an opportunity as they continued to surround the Dutch goal, but needed a Perisset penalty in the 102nd minute to finally tie the tie.

Corinne Diacre’s side were awarded the penalty after Kadidiatou Diani was brought down by defender Dominique Janssen and Perisset fired her shot into the corner of the net past a swooping Daphne van Domselaar, who had been magnificent.

“All the players played their roles and we saw how well it worked out,” Diacre said. “We would have liked to have scored earlier, but we were up against an incredible Dutch goalkeeper.”

France became the fourth nation to reach the semi-finals of the Women’s European Championship, the World Cup and the Olympic Games after Germany, Norway and Sweden.

On Wednesday they will play eight-time European champions Germany after hosts England meet Sweden in the first semi-final on Tuesday.

See also  NHL Style Power Rankings: The data is out and our inaugural fashion king is... | Fashion

France had scored all eight of their group stage goals before half-time, but despite putting the Dutch under relentless pressure, they were unable to score in the 90 minutes.

The Dutch had one shot on target throughout the game, even with their all-time leading goalscorer Vivianne Miedema returning to the lineup after missing two group stage matches due to COVID-19.

HEROIC OF THE GUARDIAN

Mark Parsons’ Dutch side were also very lucky to have Van Domselaar, whose incredible saves took the game into extra time.

The 22-year-old played one international match before replacing the injured Sari van Veenendaal in their first 1-1 draw against Sweden.

Van Domselaar blocked a low shot from Diani in the 15th minute, as well as powerful strikes from Charlotte Bilbault and Delphine Cascarino from outside the box in the next five minutes.

“We gave it our all. There’s not a player left with an ounce of energy,” Parsons said.

“The first half was very difficult, it wasn’t us, but we came 0-0 thanks to Daphne (van Domselaar) and others. The second half was much better, we really believed in extra time, but our bodies were tired. I couldn’t be more proud of the effort.

France’s Cascarino continued to look for the opening goal with an effort in the 27th minute but his attempt hit the post.

Melvine Malard thought he had finally found the opening goal for France in the 37th, but Stefanie Van Der Gragt blocked his shot on the goal line.

The well-positioned Van Der Gragt went on to block another shot from Grace Geyoro, who tried his luck from close range four minutes later.

Geyoro, who scored a hat-trick in France’s first tournament match against Italy, was unable to find the net again from close range with three minutes remaining.

But France deserved the victory and the final count of 33-9 shots in their favor, with 11-1 on target, showed their dominance.

Reporting by Anita Kobylinska on Greenland, editing by Pritha Sarkar and Ken Ferris