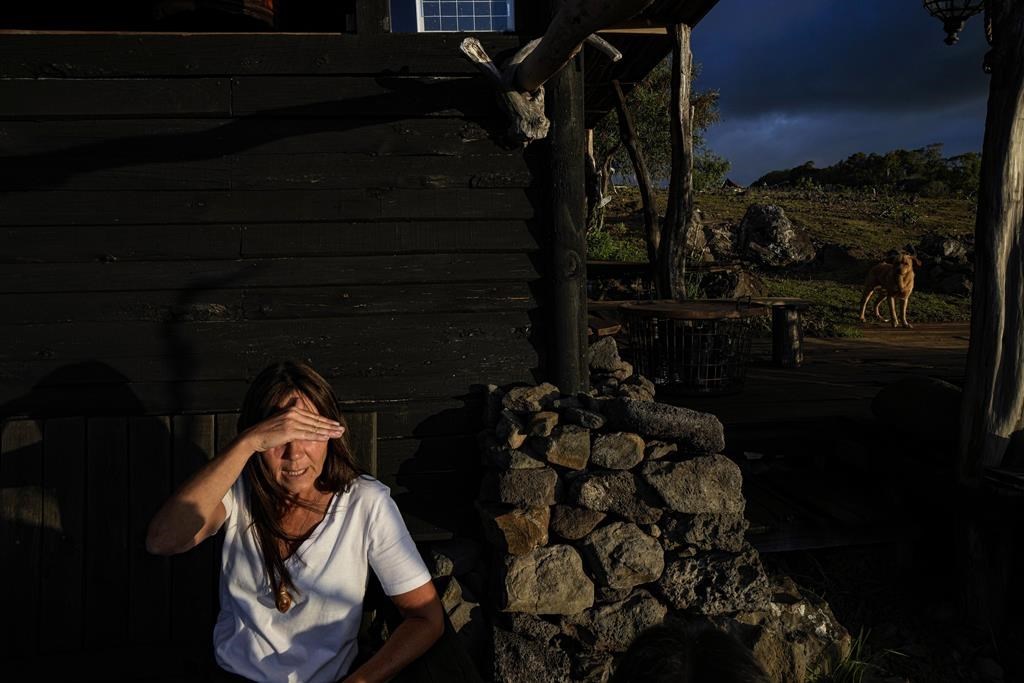 RAPA NUI, Chile (AP) — Rapa Nui, the remote Chilean territory in the mid-Pacific known as Easter Island, is home to a Catholic church that displays works of art that reflect the islanders’ ancient culture as well as their Christian beliefs. Among the striking works are the stained glass windows, created by an artist of French origin, depicting figures resembling the inhabitants of Rapa Nui.

The artist, Delphine Poulain, was born in Paris 52 years ago and has been in love with Rapa Nui since she visited it for the first time in 1994. She smiles when she remembers it.

“I was riding a horse on the beach when I first thought, ‘I want to live here,’” she said.

At the time, Poulain was living in Tahiti, working as a professional sailor and often traveling to other Polynesian islands. A trip to Rapa Nui was enough to glimpse a future home in this land of extinct volcanoes and monolithic statues called moai, although almost three decades passed before that dream came true.

On occasion, Poulain worked as a nurse. She became a boat decorator. She occasionally returned to Paris, but her fascination with Polynesia repeatedly took her back to the Pacific.

On one of those return trips to France, she fell in love again with the man who had been her teenage boyfriend. They now have two children of their own, and the four of them have made a home on Rapa Nui since 2014.

Poulain says he treasures the freedom and tranquility provided by the remoteness of the island, home to some 7,700 people.

Last year, grateful for the blessings that Rapa Nui has bestowed on her, Poulain offered a gift: stained glass windows depicting the 14 Stations of the Cross in the Church of the Holy Cross, located in Hanga Roa, the island’s main city.

Today, the Rapanui community is predominantly Catholic, but their religious practices are intertwined with their ancestral beliefs.

The musical themes that the devotees sing during the Mass narrate biblical passages translated into the Rapanui language. The wooden statues representing the Virgin Mary and the Holy Spirit were not inspired by Western iconography, but by the physique and legacy of the islanders’ ancestors.

The statue of Mary, near the altar of the church, resembles a moai. Near the main entrance, the third symbol of the Holy Trinity is not a dove, but a manutara, a bird that was considered sacred during the 19th century.

Adapting Catholic iconography to the ancestral Rapa Nui culture has been key to maintaining adherence to the religion that European missionaries spread during the 18th century.

Rapanui are protective of their identity and tend to welcome foreigners only if they make an effort to embrace the culture of the islanders. On a tomb outside the Church of the Holy Cross, where the remains of beloved missionary Sebastian Englert are kept, the epitaph reads: “He lived among us and spoke our language.”

Poulain said winning acceptance from the locals was not easy, but he has been patient. Her stained glass windows were one more step along the way: since he began to place them in the church on December 24, 2021, some Rapanui who did not greet her before now wave their hands when they see her pass.

“I have a lot of respect for the island and the people,” he said. “Before I was alone, but now people know my husband and my children.”

Poulain’s commitment to integrate into the island is part of his daily life. Her family lives by the beach where, long ago, she dreamed of moving here. The color of her house is reminiscent of the volcanic rock of the area, so as not to alter the landscape. The water used in the home is collected from rain. They rely on a solar panel for electricity.

When they moved here, the family only had a tent to protect themselves. Now their house is a repository of what the island has given them.

The roof was built with sheet metal and the rest with wood. Dishes are washed in what used to be the bottom of a bathtub; above the dining room is a lamp that was once a metal trash can.

“There has been a lot of difficulty, but also a lot of joy. This was my dream and living your dream is incredible,” Poulain said.

Inside her studio, there is a tree next to the makeshift desk where the artist finds inspiration. Her work begins with sketches on a blank sheet. She then brings the images of her to the canvas with acrylic paint.

Poulain never formally studied art. But his parents had books at home and he remembers reading one about the mysteries of the world, where he first learned about Rapa Nui. His artistic style has varied over the years, but the Polynesian aesthetic has been a constant.

In addition to his artwork, Poulain has seven horses, and earns some income by offering horseback riding for tourists.

Sometimes he sits outside his house, drinking wine and watching his horses come up for dinner. The scene could be an imaginary landscape from one of her paintings; instead, it’s her longtime dream come true.