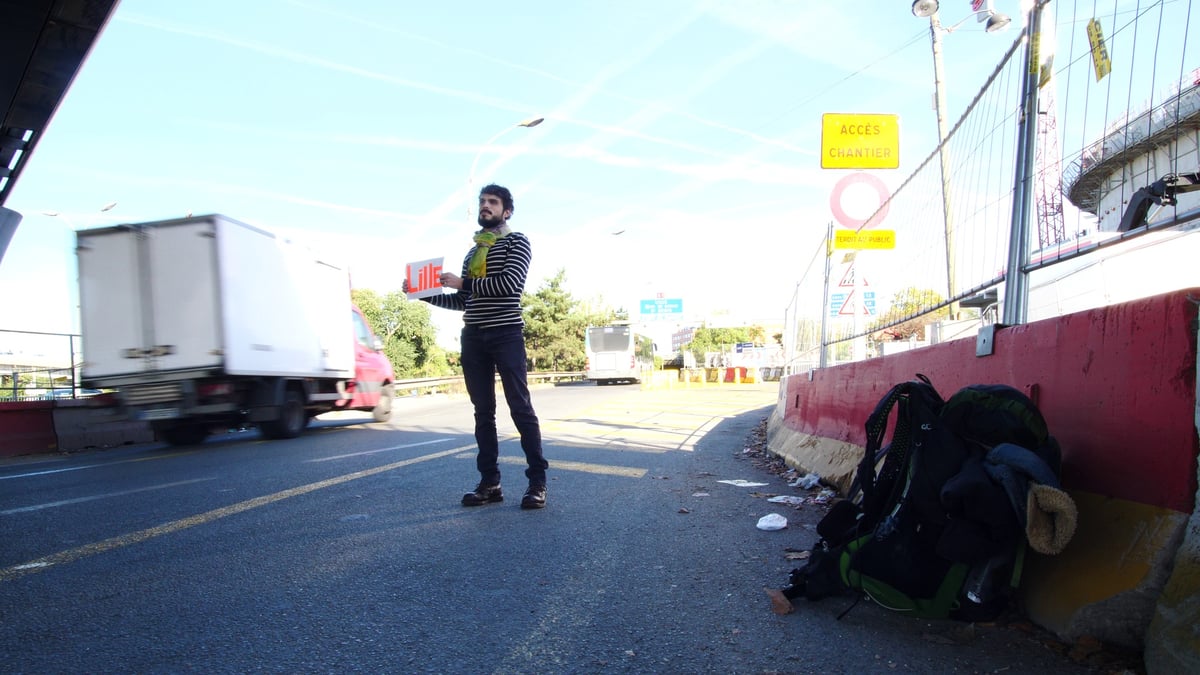 Sebastien Urbain traveled more than 700 miles from Paris to Glasgow, trusting completely in the kindness of strangers and documenting his experiences along the way.

A French film director hitchhiking over 700 miles from Paris to Glasgow, armed with little more than a camera and a laptop, created a short film documenting his travels and interactions with the people he met along the way.

Sébastien Urbain is a film director from Compiègne in France – he had never been to Glasgow before this trip – and decided on the destination on a whim while planning his route on a map.

His plan was to travel as far north as he could, reaching a city where he could stay for a while and find a theater to show the short film. He thought that Glasgow would be the perfect destination.

The documentary, called Paris-Glasgow, is 24 minutes long and follows Sebastien on his five-day journey from Paris to Glasgow. In those five days he lived a lifetime, from despair as he struggled to be picked up on the road, to great joy in meeting new people, experiencing genuine human compassion, and making lifelong friends along the way.

“I decided on Glasgow because it is a city very north of Paris, and the city is very interested in film and cinema, which made it perfect for me. She wanted to interview people along the way, get a window into their lives, and discover her own dreams.

“It was certainly difficult, but it was a real adventure, you really don’t know what’s going to happen. I used to hitchhike a lot when I was younger, but haven’t had the chance in years.

“When I was traveling originally, I had no money, so it’s a bit strange to hitchhike when now I can afford a bus or train, so sometimes I felt a bit like ‘why am I doing this? ‘

“But I had to remember that for me, hitchhiking is the best way to travel, you meet people in a very short time in both of your lives, people you wouldn’t normally meet, it’s very intense.”

Sébastien’s journey began north of Paris, where he is skeptical about the journey and whether he will be able to make it as far as Glasgow. He spent more than two and a half hours in a Paris interchange waiting for his first trip to Lille, before taking the bus to Charles de Gaulles airport and hitchhiking from there.

Finally, a man came by and picked up the young film director, taking him to Lille, a city in France near the country’s border with Belgium. From here he hitchhiked to Calais, on the northern border of France, just a short channel ride from the UK.

Successfully securing a ride to Calais, Sébastien receives a life lesson from his new driver: Urbain sat in the passenger seat and listened to the man talk about travel, and the introspection and understanding of oneself and other people that can bring.

Sébastien continued: “A person’s car is a very personal space, it’s like their bedroom, it’s very, very private. So to share that with someone is very special, and it makes for a really unique and special experience that you can’t find anywhere else.

“The trip made me remember why I love traveling so much. It was the first time I had filmed a trip like this, it was difficult to manage between filming and staying present in the moment with the people who picked me up.”

See also  Elie Saab leans into a cheery makeover at Paris Fashion Week
Film director at the side of a road in the UK, holding his thumb up waiting for a lift.

It was in Calais that Sébastien met a busker named Auguste who carried a saxophone. He spent the night drinking with Auguste and interviewing him about his dreams and aspirations.

Speaking of his meeting with Auguste, the director said: “I think the best moment was when I met this guy in France, he was from Argentina and we spent the night together drinking.

“It was great, sometimes when you meet someone for the first time and you feel like you’ve known that person forever, it was like that. It was definitely one of the happiest moments of the trip.”

After taking the ferry from Calais to Dover, he arrives in England on the third day of his trip and takes another trip, holding a cardboard sign that simply reads “North”.

Moving further north, Urbain hitchhikes to Leeds next, getting a ride from a man named Ausman, who drops him off at a small service station near Birdwell, a small town between Sheffield and Leeds.

He’s stuck there for a while, as the trip stretches from his fourth day to his fourth night, it starts to look like he’s going to have to sleep outside. As Sébastien settles in for a restless sleep, the gas station attendant offers him a place to sleep in the back of her car while she works, to which he graciously accepts.

The kind woman greets Sébastien warmly when he wakes up, offering him coffee and use of the facilities, as he prepares to leave and thanks the woman for her kindness.

“I had some security issues, of course, but halfway through I learned to accept the risk: if I lose my gear, I lose my gear, it’s a real risk, but I think it was worth it.

“When I arrived in England I gave up those worries, the kindness of the people on the road was incredible for me.

“Throughout the trip people were telling me how friendly Glasgow was, so I had an idea of ​​what to expect even though I had never been there before, and I wasn’t disappointed, the people here are so welcoming and friendly.”

Sebastien Urbain on the first leg of his journey, solemnly waiting to be taken from Paris to Lille.

It was the next morning, on day five of his trip, that Sebastien finally made it to Glasgow, thanks to the help of two commuting Glaswegians.

After arriving in Glasgow, he set to work editing it all together and finding a film to showcase his fresh new short. Easier said than done, as the French director knew absolutely no one in the city and nothing about the city’s independent film scene.

It didn’t take long, however, as after just a week, the film opened at the Glasgow Film Theater on Sunday 6th November.

Sharing his thoughts on the city, Urbain said: “I think Glasgow has a very special atmosphere – the atmosphere is completely different to the rest of the UK.

“The city has some real culture, and it was so welcoming to me despite the face that I didn’t know a thing about Glasgow or anyone here.”

The short documentary serves as a test for Urbain’s dream movie: a journey of epic proportions in which he hopes to hitchhike from New York to Peru, arriving in the Amazon jungle, a wonder he has always dreamed of visiting.

Sébastien hopes to complete this journey next year: filming, editing and living the adventure in the same way that he filmed his journey from Paris to Glasgow. You can follow the new project here: https://www.facebook.com/NYA.lefilm

You can also follow Sébastien behind the scenes at instagramas you prepare for your next big trip.