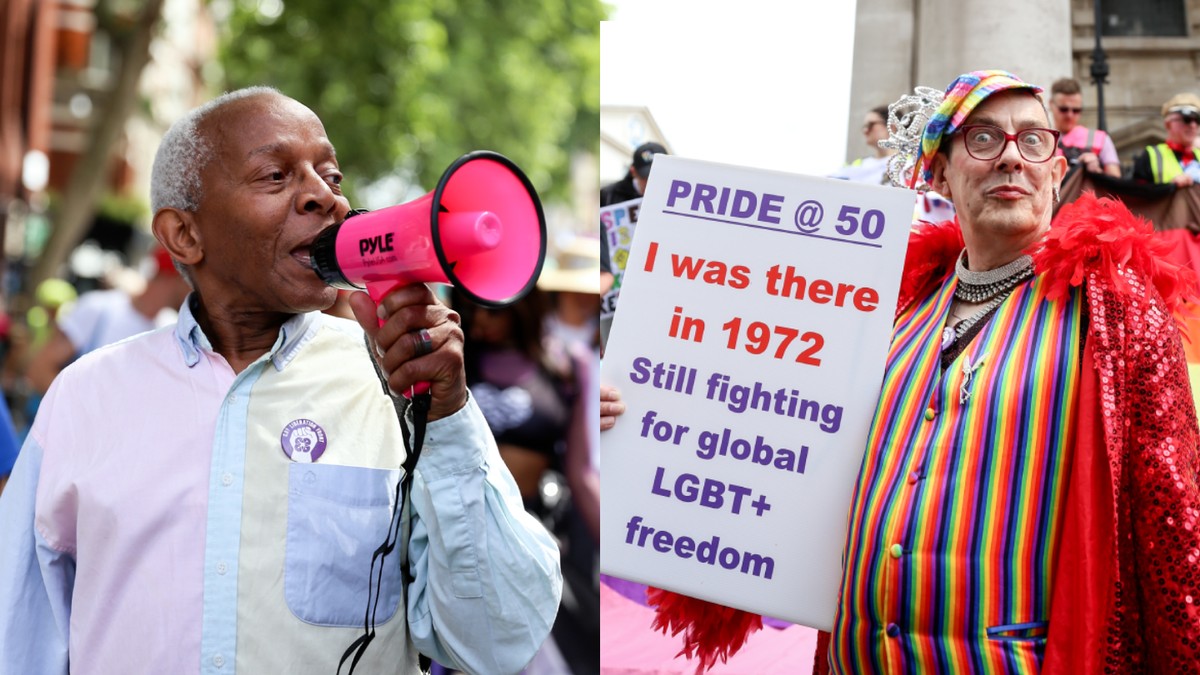 “We are on the front lines of the fight”, author and LGBTQ activist roz kaveney He says. Kaveney would know: In 1972, she was part of the group that organized the UK’s first Pride Parade, the now-annual parade that celebrates its 50th anniversary this month.

The Gay Liberation Front (GLF) was founded in 1970 following the stonewall riots in New York and staged some of the most anarchic and groundbreaking protests in British history, including disrupting the launch of the Christian Family Values ​​campaign festival of light with stink bombs, a lesbian kiss and nuns in disguise.

“You have to remember that the GLF was not an organization: it was a movement and had many different types of people,” says historian and activist Lisa Power, 67, who has extensively documented the organization’s history.

But Pride is perhaps the GLF’s most important legacy. This year, the parade in London attracted 1.5 million people and corporate sponsors per metric ton. Fifty years ago, only a few hundred protesters showed up and there was a real fear of public harassment and attack.

But even then, the parade set the tone for decades to come. “I joined Pride in the mid-1970s and my earliest memory of Pride is people arguing with each other about marketing because [openly queer singer] Tom Robinson had been in The top of the popsPower laughs. “So believe me, the same arguments have been going on for four decades and more.”

On Friday, the day before the official London Pride parade, some of the remaining GLF organizers met with younger activists and queers to retrace the steps of the march they headed all those years ago. VICE photographer Bex Wade met with five of them on the day of the march to document their memories of the first Pride and to ask them about the most pressing issues facing the LGBTQ community today.

I was a teenager who knew I was gay since I was ten or eleven years old and I started talking about it in school, which surprised everyone, and I started looking for things like gays, GLF and things like that. I was a precocious brat. I started going to GLF meetings when I was like 15 or 16 years old. [The first Pride march] It was fabulous. It taught me the value that [it] It doesn’t matter if you think you’re different, because we are all unique individuals, but let’s not be ashamed or scared about it. Let us not think that because we are merely statistically deviant, we are not entitled to the same sun as everyone else.

we knew [the march] It could be a slap in the face and we knew it would be a small group of us. We knew there was bewilderment, hostility and fear from the police, the public and all the gay people around us who thought, ‘Oh, you’re capsizing the boat.’ there was fear [and] apprehensive, but we did it and the sky did not fall.

I don’t know that there is a single fight. There are always multiple struggles that we come out of because of our identities, our age, the way we choose to express our gender. There is transphobia, there are still, it seems, discussions about sex education in schools. There are still disputes about how our LGBTI asylum seekers are not treated with respect and dignity like other people. There is a crisis in LGBTI youth homelessness and there is also a crisis in elder care for LGBTI people. I think all of these things are our struggles.

I got involved in the GLF in April 1971 because my closest friend happened to be gay, so we went to the first meeting together. From then on, he wore a Gay Liberation Front badge at all times, day in and day out, not in bed, but other than that.

We didn’t give any speeches in Trafalgar Square and we never told the press because it was all about us coming out. [That was] a great thing that made GLF different from organizations that wanted legal equality but didn’t ask if everyone could participate. In Hyde Park, we played silly games and had a massive kiss and 12 of the men took off all their clothes and danced. We just had a great time. I was smoking weed and the police just didn’t know what to do; There were probably about 700 people, and they just couldn’t come and arrest all of us. It was true strength in numbers.

I don’t know if I can separate [LGBTQ] rights and the rights of all. What is happening in Hong Kong, for example, is not really a gay struggle. But it is very, very important. I also think, as the GLF shows, about how you can try and start a revolution. They inspire us.

I read an article about [the GLF] in a magazine in 1969, but there was no way to contact that group. But then I came across the movie. guys in the band, which was shown at the Odeon, Leicester Square. When I left the theater, there was a group of people handing out flyers about the movie, saying it was a misrepresentation of gay men. The flyers were from the GLF, inviting people to attend one of their upcoming meetings.

GLF was always a movement, never an organization. There is no official membership, we have no director or leadership, we are totally opposed to a hierarchical structure. Everyone just collaborates.

My memories of the first Pride are mixed with euphoria, because for the first time myself and other lesbians and gay men were going to come out and challenge the homophobia and stereotypes that existed and were allowed to exist while remaining silent. . But there was also apprehension, because this had never been done before. We had no idea how the police or the public were going to respond. Many of us had been beaten individually and feared that there might be attacks as we marched down the street. But we decided to go ahead anyway.

the [biggest current struggle in LGBTQ rights is] for the recognition and respect of trans people. Unfortunately, in the early days, the GLF did not take trans people very seriously. It was not considered a problem. I’m not exactly sure why, maybe it was because we ignored it. But in the last five years or so, it has become a mainstream issue about people’s self-identity and their right to be who they are.

I was a recent Oxford graduate who had been in the trans community since my teens, but was still very scared. I got involved with GLF because I came to London working at the British Library on my postgraduate work. I called GLF and said, “Is there a trans group?” I met Rachel Pollack, who was the group coordinator and has been my friend for 51 years. As it happens, because Rachel has been back in the States for years, and so many of the others are dead, I’m probably the only person from the GLF trans caucus still in London.

The great fight is the fight against international fascism, which is trying to destroy the entire LGBT community. If someone doesn’t think that’s not the priority, they’re asleep. There is an international authoritarian movement targeting all LGBTQIA people, both because they hate us in their own right and because we are a useful wedge issue. We are a bit of the modern world that reactionaries hate. The reactionaries are terrified of losing their power because if they lose it now, they will have lost it forever.

Many people delude themselves into thinking that transphobia is somehow a progressive cause. They are not only wrong, they are also self-destructive fools. It’s as simple as that. Today means an opportunity to celebrate the fight because the fight continues.

I was involved politically from a very young age of 14: Irish politics, peace politics, which is also the same age that I reached out to myself and other people. That was in 1967. I got involved in the Young Communist Party trade union movement and then was absorbed into GLF early on. He believed in social change, system change and anti-capitalism, but something was missing.

Since the first Pride March, he used to organize many Pride marches and marches during the 1970s, including the National Gay News Advocacy Committee. I don’t remember anything in particular [from the first Pride March] other than that it was empowering. He filled the void, everything that was missing in my revolutionary politics.

In this country, the biggest fight is the issue of transphobia. It is increasingly widespread and tragically also in the LGBT movement, especially with the rise of LGB and T separation. The government’s refusal to address conversion therapy is horrendous.