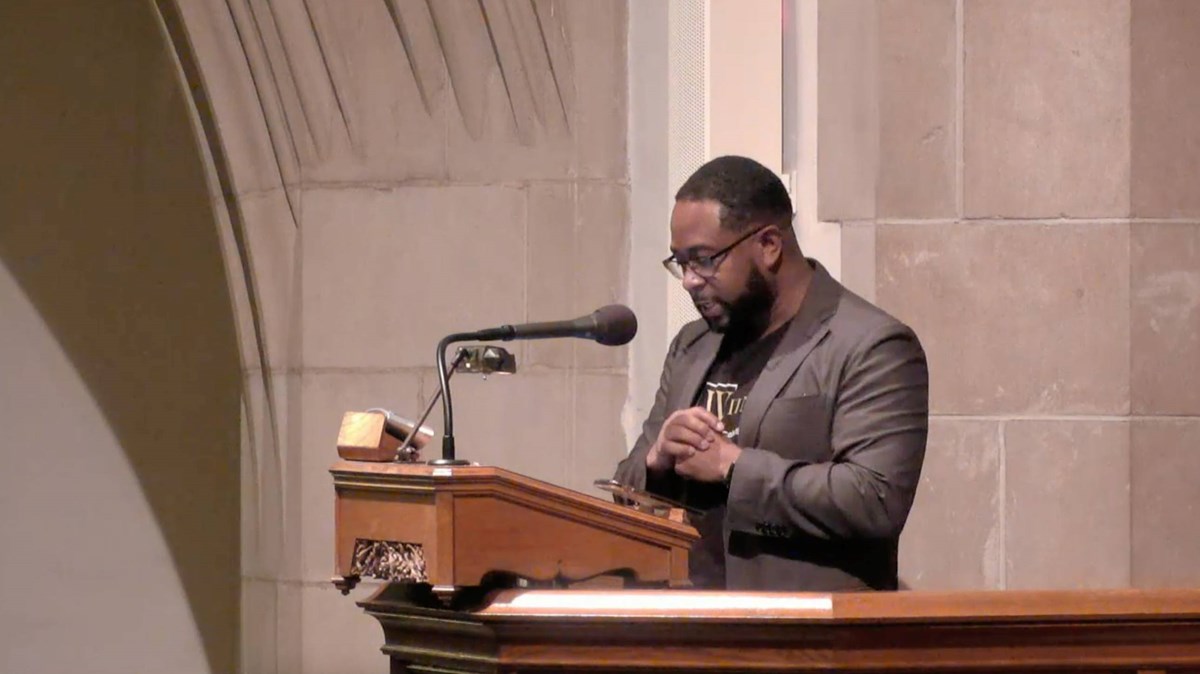 Grove City College insists it’s not about “waking up.” A new report from the conservative Christian college in Pennsylvania denounced school-sponsored courses and trainings they say promoted “CRT concepts” and called it a “mistake” to invite historian Jemar Tisby to speak at a chapel service in 2020. .

“Grove City College hasn’t changed,” a committee made up largely of Grove City board members said in the report released last week. “It remains a conservative, Christ-centered institution.”

The report, the product of the committee’s assignment to determine any “mission drift” at the university, recommends adding the word “conservative” back to the school’s mission statement after it was dropped in 2021 and lists the “corrective actions” to stop the promotion. of critical race theory at school.

These actions include replacing an education course accused of promoting “pop-CRT,” changing the name of the school’s Office of Education and Multicultural Initiatives, and exercising increased scrutiny of guest speakers and student trainings.

Tisby, New York Times bestselling author of the color of commitment Y How to fight racismtold Religion News Service that the report uses CRTs as “a junk drawer for anything related to race or justice that makes a certain type of person uncomfortable.”

Because of the rhetoric around CRT, he said, “much-needed conversations about racial justice are being silenced in settings where they are most needed, like Christian colleges and universities.”

Others found the report encouraging. Megan Basham, Author for a Conservative Media the daily wire, tweeted that he offered a “straightforward and honest assessment,” and said he appreciated his illuminating description of how CRT is incompatible with the school’s mission. “The full report is worth reading. Bravo!”

Matt Kennedy, rector of an Anglican church in Binghamton, New York, and his wife Anne Carlson Kennedy praised the report on its podcast.

The report says that critical race theory is incompatible with the school’s vision, mission, and values ​​because it assesses people based on their race and anti-racist works, cannot be separated from political activism, “mercilessly detects aggression where it is not intended” and sometimes “degrades rational argument as itself racist and oppressive.”

The school, which has just 2,400 full-time students, was first accused of promoting critical race theory, an academic framework that sees racism as embedded in institutions and policies, in a November petition written by Grove City parents and alumni. The petition alleged that this “destructive and deeply unbiblical worldview” was affirmed at the university in a fall 2020 chapel presentation by Tisby.

The petition also challenged the chapel showing of a pre-recorded TED talk by Bryan Stevenson, founder of the Equal Justice Initiative and advocate for criminal justice reform; as well as a Resident Assistant training that invoked the concepts of white privilege and white guilt. Additionally, the petition denounced several books used in an education studies class and in focus groups, including Ibram X. Kendi’s book. How to be an anti-racist and Wheaton professor Esau McCaulley reading being black.

That initial petition triggered a flood of follow-up petitions, articles, and open letters debating whether the school had abandoned its traditional values. In February, the university’s board of trustees categorically refused critical career theory and introduced a committee to investigate allegations of mission drift. Grove City College did not respond to multiple requests for comment.

The report notes that Tisby’s October 2020 chapel presentation it is the chapel service that has “called the most attention from critics.” According to the report, most Grove City leaders interviewed said inviting Tisby to speak at chapel was a “mistake” because of what they described as her evolution.

“Most of the GCC leaders we spoke with observed that ‘the Jemar Tisby we thought we invited in 2019 is not the Jemar Tisby we heard about in 2020 or are now reading about,'” the report states, citing the brief comment from Tisby. his tenure as deputy director of storytelling and advocacy at the Ibram X. Kendi Anti-Racist Research Center and the “progressive politics” he defends in his latest book as evidence of his transformation.

Tisby told RNS that his convictions did not change between 2019 and 2020; what changed was the sociopolitical climate.

The chapel in question, called “The Urgency of Now,” was a 21-minute sermon that drew parallels between the biblical story of Esther and the modern movement for racial justice. Tisby cited Martin Luther King Jr.’s “I Have a Dream” speech and letter from the Birmingham jail and called on attendees to commit to racial justice work.

“Many of you, unfortunately, are in the target demographic that King called the ‘white moderate,'” Tisby said at the chapel. Tisby asked listeners to “fill their minds with the awareness of racial justice so that five, 10, 20 years from now, they don’t have to say ‘I never knew.'”

See also  Use Waterbury's federal COVID funds to invest in students, not buildings

Tisby told RNS that the accusations that his sermon promoted CRT are “ridiculous.” While the November petition accused Tisby of being an “outspoken apologist for CRT,” Tisby said he has never been trained in critical race theory.

The report also found that an educational course called “Cultural Diversity and Advocacy” “effectively promoted pop-CRT” because it offered readings like Kendi’s. How to be an anti-racistby Robin Diangelo white brittlenessand Ta-Nehisi Coates between the world and me without “a critical or oppositional perspective”.

It found that the director of Education and Multicultural Initiatives promoted “‘awakened’ concepts” in a book club and repeated “CRT concepts” in a training for resident assistants that criticized the “concept of racial neutrality.”

Warren Throckmorton, a psychology professor at Grove City, said he doesn’t have much confidence in the report’s findings because it offers a flawed definition of CRT. According to Throckmorton, the report says that CRT accepts biological distinctions; however, he said, CRT rejects biological distinctions because it views race as a social construct. He also pointed to a footnote that reads: “Our references to the CRT include popular advocacy ‘adjacent to the CRT’ wrapped in the secular or religious language of ‘social justice’.”

“That could be anything, couldn’t it?” Throckmorton asked. “So when they say they found CRTs, what did they really find?”

While the report promises not to ban the books, Throckmorton said that promise has done little to reassure teachers wondering whether and how to teach about topics like health disparities or social justice in the classroom. Natalie Kahler, Grove City alumna (’94) author of March 8 petition Asking the school not to inhibit discussions about racism on campus, he told RNS he is concerned the report’s findings could lead to “indoctrination and not education,” especially given that Grove City teachers do not receive tenure and They get one-year contracts.

“If you create an environment where people are constantly afraid for their jobs and afraid that something they say could be interpreted as CRT because everyone interprets CRT in very different ways, you are creating a culture where people are not going to be able to to have difficult conversations,” Khaler said.

In March, Jon Fea, a professor of American history at Messiah College in Mechanicsburg, Pennsylvania, wrote a Article showing that Grove City board president Edward D. Breen has defended for diversity, equity and inclusion as CEO of the chemical company DuPont. “Is (I) the Edward Breen who led the Grove City College Board’s condemnation of critical race theory the same guy who works for racial justice at DuPont?” Ugly asks.

Another board member, David Forney, is a pastor of a Charlottesville church and has offered a racial justice list. means your congregation on the church website, including Bryan Stevenson’s TED talks and the booksHow to be an anti-racist Y between the world and meboth characterized by the report as “pop-CRT” promoters.

“I am baffled that these resources are considered good and helpful for a board member to recommend to their congregation, but are considered off-mission for our faculty to assign as study resources for a college course,” Throckmorton said. in an email to RNS. Neither Breen nor Forney could be reached for comment.

Tisby said the CRT debate in Grove City points to a broader “sorting” in Christian higher education between schools working to be more racially and ethnically inclusive and those doubling down to attract “a very small but loyal electorate that does not want to engage in vital conversations about racism.”

In his podcast, Kennedy suggested that Grove City is exemplifying how other Christian organizations should approach the CRT. “The congregations, the denominations, need to start seeing the awakening as heresy,” Kennedy said. He added that “the language used especially by Christian wokesters is very, very gospel-like. And so the unwary can be attracted and you have compassion on them. But the leaders of this thing, those people should be kicked out of the church.”

Tisby said Grove City’s response to CRT should be taken as a warning.

“Anyone, regardless of race or ethnicity, who stands up for racial justice could be a victim of these types of attacks,” Tisby said. “And I would say that these actions are all the more regrettable as they come from Christian institutions. We follow a savior who said: ‘You will know the truth, and the truth will set you free.’ But we have people who profess to be followers of Christ, who seem to be running from the truth about racism.”