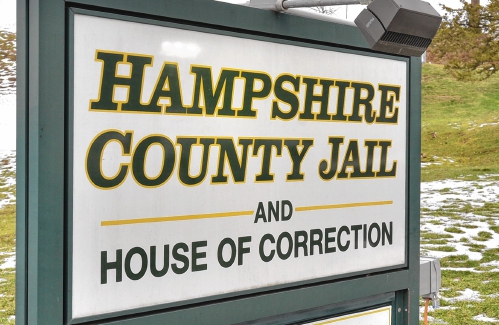 SOUTHAMPTON — Two police reports filed this month allege a woman walked past the home of a Hampshire County Jail and House of Correction employee multiple times and stopped at least twice to take photos of his home and yard, showing a lawn sign. I support Caitlin Sepeda, the candidate to unseat Sheriff Patrick Cahillane in the Democratic primary on September 6.

The woman was driving a black van with plates registered to a state government agency, according to reports, and the jail clerk told police he “suspects the activity was a result” of her Sepeda cartel.

A separate police report filed in Goshen alleges that 12 lawn signs displaying support for Sepeda and another candidate, Yvonne Gittelson, were stolen last week in a single overnight sweep in Gittelson’s own neighborhood while “Cahillane’s signs were not touched”.

The Hampshire County Sheriff’s Department is a state-funded agency that runs the Northampton Jail and Cahillane is seeking a second six-year term as its leader. Sepeda, a correctional nurse, and Gittelson, the state education department’s correctional program specialist, are running to unseat him.

A report filed by Lt. Mark Groeber of the Southampton Police Department states that a jail employee said he received a phone call from his wife while he was at work on August 8 in Northampton. The clerk said his wife had told him that a woman in a black Ford SUV pulled up to his house around 1:10 p.m. The SUV drove past the house about 10 minutes later, according to the report.

The next day, the jail clerk said he saw a black Ford pickup with the same license plate in the jail parking lot. The clerk told police that “the operator was Barbara Marean,” a deputy jail superintendent whom he “has known for 16 years,” according to the report.

Investigators determined the vehicle is registered with the state Executive Office of Management and Finance. The report notes that “no crime was involved,” but the employee wanted the incident documented in case of workplace retaliation for his political views.

Reached by phone at the jail Tuesday, Marean declined to comment or review police reports. A reporter drove through the jail parking lot around 1:45 pm and saw a black Ford pickup with the same license plate as the police reports parked in the space reserved for the deputy superintendent.

Cahillane said an investigation will be carried out into the matter, likely by a third party to ensure the public has confidence in the outcome, and that it will involve contacting Southampton Police for more information. He said that he never saw the photos that were supposedly taken.

“This is the first time I’ve heard of that. Until they contacted me, I wouldn’t have known anything about it,” Cahillane said Tuesday, adding that police did not alert the sheriff’s office.

When asked if he directed or encouraged anyone to engage in such activity, Cahillane said: “No, I haven’t, I wouldn’t even think of doing it. I have raced so far, and plan to continue racing, a very positive campaign. … My two opponents have not done the same.”

A second report filed by Southampton officer Wendy Iozzo states that Iozzo had a verbal exchange with the driver while sitting in the van in question near the jail clerk’s home around 8:00 p.m. on Saturday the 13th. of August. Iozzo wrote that she had responded to a suspicious vehicle report; She wasn’t sure if the vehicle was involved in surveillance or a state agency investigation, so she “asked the operator what was going on,” she wrote.

The driver spoke to the officer in a manner that Iozzo wrote was “upset and agitated.” The report does not contain quotes from that conversation and does not identify the driver.

“Based on the operator’s sarcastic response and unprofessional tone, I concluded that an official investigation was not underway and told the operator to have a good night before leaving,” Iozzo wrote.

Iozzo then responded to the jail clerk’s home to speak with him and his wife. During that conversation, the truck drove past the house again, and the employee’s wife detailed a second incident in which the driver photographed her and her house.

Sepeda provided copies of the police reports to the Gazette in redacted form to protect the employee’s name and address. The Gazette has filed a public records request with the Southampton Police Department over the unredacted reports, but Chief Ian Illingsworth confirmed that the redacted copies seen by the Gazette are genuine.

“I have the support of an important part of the staff. Because of these problems, they are clearly afraid to show that support publicly,” Sepeda said. “I want to congratulate (the employee) for his bravery. This is not an isolated incident, but it is an incident that we were able to fully document.”

Sepeda said she is “afraid for all the rest of the staff … but particularly this individual because he repeats himself and appears to be a target.”

Cahillane rejected any suggestion that an employee would suffer retaliation for their political views, saying his department has “the highest standards” and specifically defended Marean as someone who would not retaliate.

See also  Unicef ​​​​concerned about the future of women and children

“I don’t think Barbara Marean would do such a thing,” Cahillane said. “Without looking at it more closely, I don’t know why she was in that neighborhood.”

Gittelson, the Goshen resident who ran for sheriff against Cahillane and Sepeda, filed a report with the Goshen Police Department earlier this month about the theft of 12 campaign signs in her neighborhood, including one from her own yard.

Signs supporting Gittelson and Sepeda disappeared overnight on Aug. 14, according to the report written by Acting Police Chief William Bissell.

Unlike the Southampton report in which police determined “no crime was involved,” the Goshen report states that the responsible party could be charged with misdemeanor theft.

“There was a whole row of ‘Yvonne for Sheriff’ signs and they were gone,” Gittelson said Tuesday. “Theft, pure and simple. It’s theft. One is not exceptionally valuable, but many of them disappeared.

She described the thefts as election interference, civil rights violations and burglary.

Bissell advised Gittelson to install security cameras, according to the report.

Cahillane said lawn sign theft is not unusual during the campaign season.

“I haven’t kept track of how many I’ve lost,” Cahillane said.

The candidates will participate in a forum at the Northampton Center for the Arts, 33 Hawley St., on Thursday at 7 pm, sponsored by the Daily Hampshire Gazette and the Northampton and Amherst chapters of the League of Women Voters.

Brian Steele can be reached at [email protected]