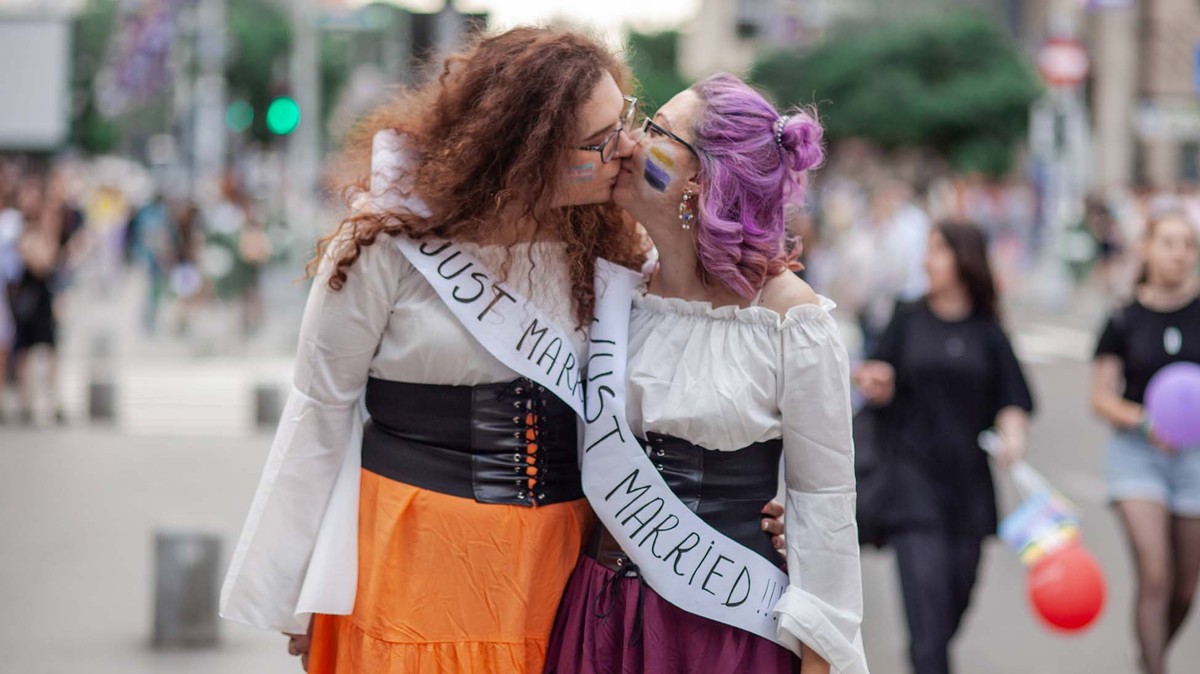 One Saturday in early July I arrived at the Bucharest town hall to attend a very special event: my old friend Georgiana was getting married to her partner Evie. What makes this particular union so remarkable is that the two women, who asked not to share their full names for privacy and security reasons, will marry in Romania, a country that has banned gay marriage and has some of the most discriminatory laws Y attitudes towards LGBTQ people in Europe.

So how did they do it? Well, Evie is a trans woman and she hasn’t changed her gender on her papers yet. This allowed the couple to circumvent their country’s restrictive definition of marriage, at least on paper.

Georgiana and Evie met on Tinder in October 2021 and, true to the lesbian relationship stereotype, moved on a month later. Georgiana proposed in December and Evie did the same in April (double proposal is one of the ways LGBTQ people are rethinking the wedding industry).

“We decided to speed up the marriage because Evie is going to change her gender on her ID. After that, we won’t be able to do it anymore,” Georgiana explained when I met with the brides-to-be a week before the big day. Both have been married before: Georgiana divorced in 2016 and Evie, who had a child with her previous partner, divorced in 2021 after coming out as trans.

Evie was 36 years old at the time, and her coming out ended a long period of trouble with her mental health. “In the trans community, they call it mental gymnastics,” she said. “Instead of accepting that you’re trans, because that would cause you countless problems, you start finding all kinds of other reasons for your depression.”

Although it took her a while to get there, Evie said transitioning as an adult rather than a child or teenager has its advantages. “You don’t care as much about other people’s opinions, you don’t get bullied at school, and you don’t depend on your parents anymore,” she explained. “You have your own money, your own place, and you are not afraid that your parents will kick you out.”

That was a very real fear for Evie, especially since her mother still doesn’t accept her. “She said that she felt that she had lost a son, who was replaced by a stranger,” Evie recalled. Unfortunately, her best friend also ended up distancing herself from her. But the joy of transition turned out to be greater than the pain of losing people, and “I made new friends, anyway,” smiled Evie. Also, some people in her life have always been supportive, including her ex-wife and her son, who now calls her “her mom” when he visits her and Georgiana.

Georgiana and Evie chose to get married on July 9, hours before the Bucharest Gay Pride parade. Inside City Hall, I felt an uncomfortable lump in my throat seeing all the straight couples waiting to get married in front of their families, what can I say? I don’t really like weddings. I only relaxed once I saw the happy couple arrive with Georgiana’s mother and a few friends: Georgiana in a smart suit and heels, Evie in a colorful sundress and sneakers.

Unfortunately, Georgiana’s father did not attend. “He told me that he is from another era and that he doesn’t understand,” he said. Evie’s parents were also not present. “When I told my mom that I was going to marry Georgiana, her face changed and she started crying,” she said. “I told her that if she couldn’t be happy for us, she shouldn’t come to our wedding.” But Evie is hoping her mom will change her mind before next year, when the couple plans to have a celebration with friends and family.

After some hugs and some encouraging jokes, our group was called to the door of the town hall and asked for the “boyfriend and girlfriend” documents. “They’re probably going to give me a dead name, I don’t expect anything else from them, honestly,” Evie said. “I think the officials will do everything to show that they do not agree with the situation. But at the end of the day, they will have to do their job.”

Evie and Georgiana came prepared: In the days leading up to the wedding, they researched laws on discrimination based on gender, sexual orientation, and appearance to avoid potential trouble. They showed up to their big day like it was a court, armed with hard copies of all applicable rules and regulations.

Romanian law says that it is illegal to deny someone a public service based on race, nationality, ethnicity, religion, social category, age, gender or sexual orientation. It also states that it would be illegal to refuse to marry someone because of the way they choose to present themselves.

Despite what the law says, the couple was still prevented from entering the courtyard of the town hall by the person who took their documents, who said that someone would come to talk to them. Five minutes later, a middle-aged lady wearing a Romanian flag sash came downstairs and asked who her boyfriend was.

“Me,” Evie replied without blinking. “Sir, we have a problem. I can’t marry you unless you go home and dress up like a man,” the public servant said.

“Excuse me, but why don’t you tell me to go home and dress up like a woman?” Georgiana added, touchingly.

“Don’t worry, I’m not talking to you, I’m talking to the man here!” the woman said. (I guess she really transphobic go hand in hand with misogyny.)

As the women showed the public servant proof of their right to marry, he kept insisting that Evie had to go home and put on some pants. “Where does the law say how to dress in the civil registry?” Georgiana asked.

“We live in Romania,” said the city council representative, “and there are no men in clothes here!” Finally, the woman told us to wait while she called her superior. She talked on the phone for a few long minutes, during which the guards at the town hall gate made it clear that we could not go one step beyond that gate.

Eventually, she came back to us, only to deny Evie and Georgiana service yet again. Meanwhile, a crowd had gathered around us and was watching, some laughing, others filming the unfolding scene on their phones.

Beginning to doubt if we would make it, I found myself turning to the lady with teary eyes. “Ma’am, do you really want to ruin this day for two people who love each other only because of the clothes they are wearing?” I asked.

In the end I don’t know what worked, the empathy of the official or the law. She made another long phone call, came back and let us into the building, but told us we couldn’t take pictures. “Why? It’s such a special moment for us as it is for everyone getting married!” Georgiana asked. The city council representative must have gotten tired of arguing, because he just waved a hand and agreed.

Once inside, he began to read the civil marriage script, emphasizing very emphatically that “marriage is the union between a man and a woman,” even though the original text doesn’t actually say that. However, he ended the speech with: “Congratulations and I apologize for the inconvenience. What can I say, I have never witnessed anything like this in my entire life.”

“Times change, ma’am,” someone in our group responded. “You will see much more of this in the future!”

The celebrations continued at an LGBTQIA+ restaurant, where we toasted with a glass of champagne before we all headed to Bucharest Pride to celebrate.

With this big moment behind us, both newlyweds and the LGBTQIA+ community in Romania are waiting to see what the official response will be once Evie legally changes her gender. But whatever happens, this was an important precedent for our country, and I hope it gives hope to young queer people who live in fear of being themselves in a hostile society. Like I said, weddings don’t usually do much for me, but this time I found myself in tears.

“Why are you crying?” Georgiana asked. I wiped my nose and smiled back through my tears: “Because this is the world I’d like to live in.”