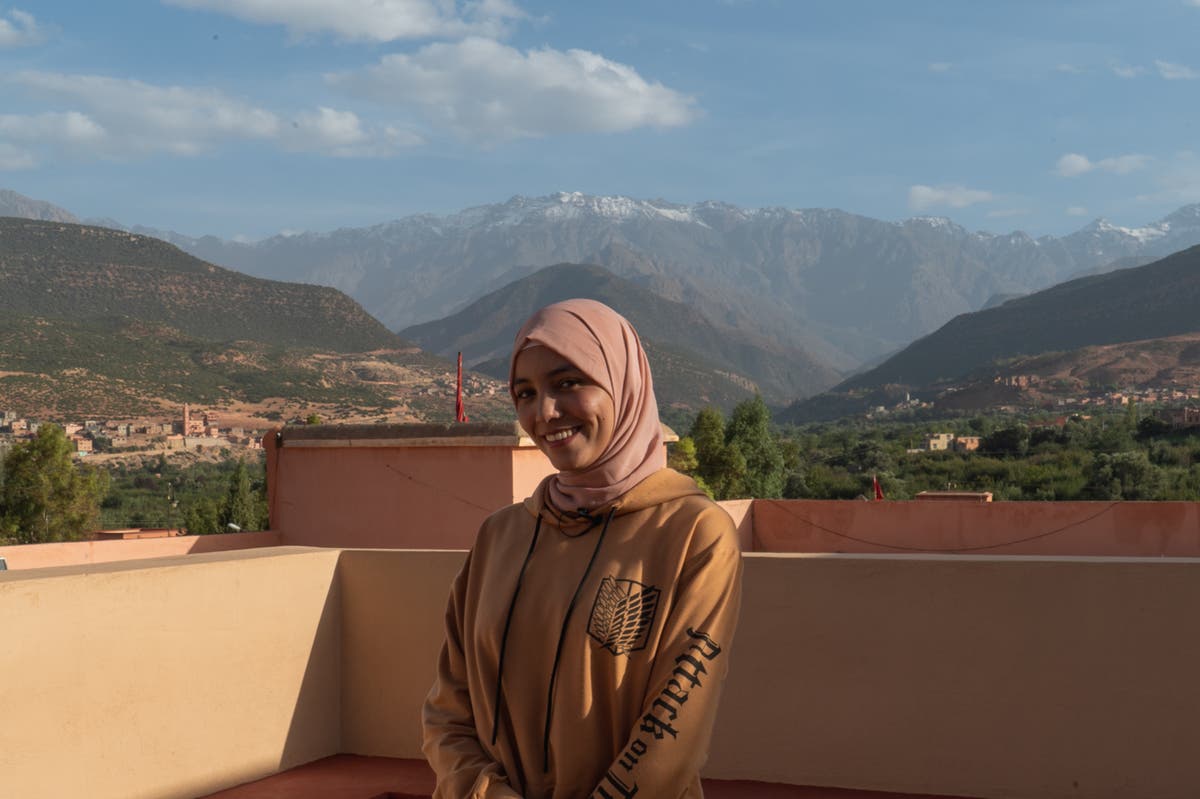 The snow-capped peaks of Morocco’s Atlas Mountains are a stunning backdrop for 17-year-old Loubna’s short walk to school, but the same stunning terrain and the traditions of her community could have confined her to a very different life.

At her age, Loubna’s mother, who had no education, was already married and pregnant.

That was also Loubna’s fate: an education beyond primary school was out of reach in her village of Imska, where simple brick houses stand on the steep slopes of the High Atlas.

But thanks to a project supported by a UK charity, Loubna lives from Monday to Saturday in a boarding house near a secondary school in the Atlas foothills town of Asni, returning home at weekends to watch To his family.

She is in her last year of college High schoolone of the brightest in her class, and hopes to go to college.

Loubna says her mother, who also has three young daughters, is her biggest supporter: “She told me, ‘You know, when I was younger, like you, I was married and pregnant with you. But you have a chance to have a bigger life.’ My mother, she just got married, that was it. She wants us to be better than her.”

education for all (EFA) was created in 2007 to give girls living in the most remote villages in the Atlas Mountains the opportunity to go to secondary school. The long journey to the valley town of Asni is considered too risky for girls and a fragmented school day means students can be homeless for long periods. The subtext: Girls can fall into “bad manners” and end up pregnant, the ultimate embarrassment for both themselves and their families.

So parents believed it was safer for girls to leave school after the primary years, stay home and help around the house, a pattern that has been the cultural norm among rural Berber families for generations.

Although school attendance rates have grown considerably in the last 20 years, only 39 percent of girls in rural Morocco are enrolled in secondary school. If a girl stays at home, she is often married off even before her period starts, and sometimes to a much older man.

“I would be married now because if you stay at home you wait a year or two and they will tell you to get married, like all the other girls. It’s compulsory,” says Loubna’s classmate Wafaa.

EFA’s concept is simple: the charity offers safe, homey boarding houses next to schools, each run by a mother, with spaces to study and relax, cozy bedrooms and three nutritious meals a day.

Latifa Aliza, 42, the enthusiastic stay-at-home mom to three dozen of the younger girls, says the charity has changed attitudes among families. “They think that girls are here in life to be housewives, to get married. But with this project we have begun to change the mentality of the parents of these girls, so that they let them go to school”.

The impact has transformed lives. So far, nearly 600 girls have passed through EFA’s doors and stayed through the full six years of Morocco’s high school curriculum. More than 90 percent passed the challenging high school final exams this year and more than 170 girls have entered university.

On a bright afternoon in late October, Loubna arrives from school at her boarding house for young people between 16 and 18 years old. She comes from her physical education evaluation and is still out of breath as she walks through a courtyard garden planted with pomegranate, apricot, and lemon trees.

He takes off his shoes and greets his housewife, Khadija, in an elaborate ritual, gently slapping her cheeks three times on one side and five times on the other. “We had to go around the track six times. I came first!” Loubna says proudly. She wears sweatpants and a hoodie, her hair is covered with a cotton bandana. All the girls look elegant in sweatshirts and leggings, long flowered dresses belted with belts or flowing skirts with pleats. For school they wear a white lab coat, the standard uniform in Moroccan schools.

The girls work hard. When they are not in school they study in the library, in the computer room or under the shade of the vines in the garden. Vivianna, a Dutch volunteer in her early 20s, leads an English lesson for a small group of girls.

Other girls walk up and down, reciting by heart the literary quotations they have learned, in preparation for a presentation at school. But there is also fun and laughter. At lunchtime they sit around the tables, chatting over hot tagines on terracotta plates.

On the roof terrace, in the pink light of sunset, the girls close their books as one begins to play a rhythm on the table, followed by another, and another. Within seconds, they’ve erupted into a spontaneous singing and dancing spree as the rest of the girls climb the steep stairs to join them.

We select girls from the most needy families

Today, EFA pensions are oversubscribed. But it was not always like this.

Fifteen years ago, one of the members of the charity committee, a respected local elder, had to go door to door with Latifa, the mother of the house, trying to persuade families to allow their daughters to attend the EFA’s first house. The initial cohort was made up of just 10 girls, but it has grown each year. There are now almost 250 girls living in six EFA houses.

The day of the selection, when the mothers of families meet to decide the next year’s admission, is always difficult, says Sonia Omar, executive director of EFA. “Our criteria is to select girls from the poorest families, and also from the most remote villages. For housewives it is very difficult because they see girls with great potential and they don’t want to reject them”.

For girls like Wafaa, a shy and thin 19-year-old, EFA was the only way out of early marriage and poverty in her village of Ouanskra, which lies under the shimmering peak of Mount Toubkal in the High Atlas.

On Saturdays, after morning school, he climbs into the back of a truck full of sacks of vegetables from the Asni weekly market to make the two-hour drive home along the hair-raising mountain road. .

He leads us down a rocky path and a narrow alley to his simple wood-block house, where guests are greeted with tea, cupcakes, nuts, and olives. Despite Wafaa’s enthusiasm to learn, her father remembers the pain of realizing that he couldn’t scrape together the 1,200 dirhams (less than £100) it would have cost him to send her only daughter to a pension from the government.

Our translator, Sara, has tears in her eyes. She herself, from a mountain village, understands the difficult decisions that peasant families must make. She has experienced life in a public pension in the capital, Rabat. Girls can be cruel and aggressive; they were locked up together without supervision every night at six. They slept in cramped, empty dorms, bathed in cold communal showers and often went hungry, she says.

EFA houses are not only free to families, they guarantee a level of care and security that has earned the trust of parents who were previously unwilling to allow their daughters to attend secondary school. “The reputation in the villages has grown. And the commitment to girls’ education has also grown. It is a great transformation,” says Omar.

In addition to access to education, the houses open up new worlds of aspirations for the girls, most of whom come from illiterate families who have rarely left their villages. “My mother did not study at all, neither primary nor secondary… but I have big dreams”, says Loubna.

He speaks confidently English, his fourth language after his native Darija, which is spoken at home, the Arabic he learned in primary school, and French, the language of instruction in Moroccan secondary schools.

Loubna hopes to win a scholarship to college and become an interpreter or tour guide. Wafaa wants to become an English teacher, if her family can find a way to support her at university. Her best friend, Zenib, who lost her mother when she was young, wants to become a doctor and open a clinic in her village, where access to medical care is poor.

Upending traditional hierarchies, these educated girls are respected when they return to their villages, says Omar. “One of my favorite stories is about a family that was in the process of making a big decision that they had to make…and the father had said, ‘We’ll wait to make this decision on Saturday when our daughter gets home.’ The family could see that their daughter had knowledge that they did not. There is a lot of pride in the community for the girls.”

For Loubna, education means a life very different from that of the women who came before her. “I will be free, I can travel anywhere, I can do what I want and when I want. That is what I mean by being free with education.”