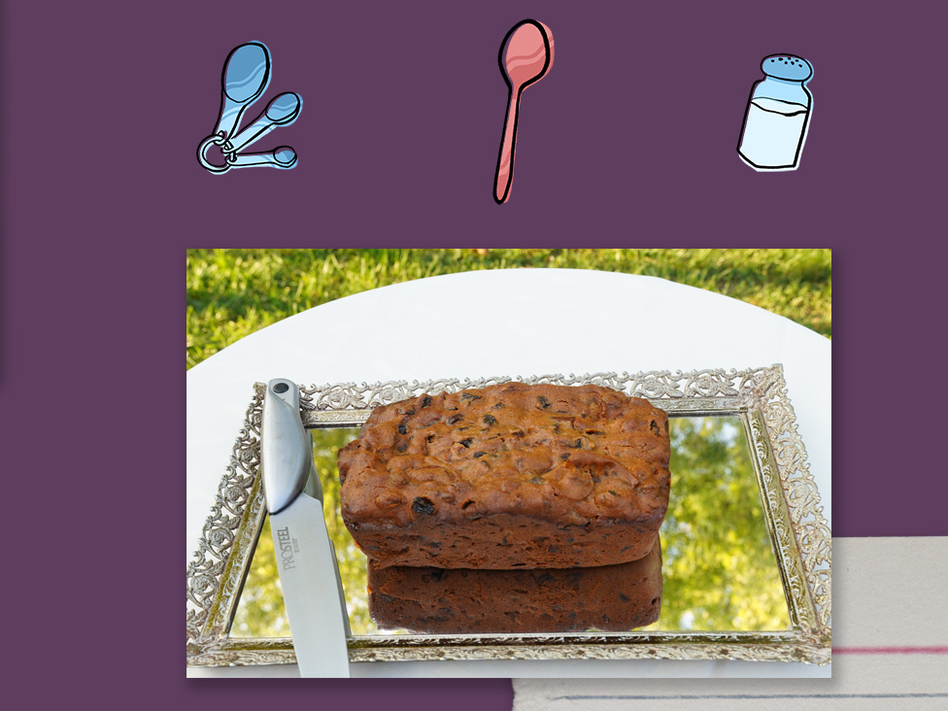 get complete details of Jokes aside, this fruitcake is legendary. It was even served at a wedding.

All Things We’re Cooking is a series featuring family recipes of you, our readers and listeners, and the special stories behind them. We’ll continue to share more of her kitchen gems throughout the holidays.

For all you fruitcake haters out there, Ellie King would like you to reconsider with a slice of her grandmother Phoebe’s fruitcake.

“I will say that when I was a kid I didn’t like fruitcake, but now I love it, and I believe there is a fruitcake for everyone,” said King, who lives in Pittsburgh. “It tastes almost like a spice cake, and the version we make is alcohol-free.”

The recipe has been in the King family for over half a century.

“Family legend is that Great-Grandma Dimock hand-wrote a copy of this fruitcake recipe and mailed it to Grandma Phoebe somewhere around World War II,” King said. “It has a lot of ingredient substitutions, and the idea is that there were wartime shortages and therefore they had to substitute different things.”

Great-grandma Dimock and Grandma Phoebe made sure the family grew up on fruitcake, King said, but Grandma Phoebe was very strict, insisting that fruitcake was just a Christmas dessert.

As is the case with many family recipes and traditions, the idea of ​​when a fruitcake can be made has changed over the years. The King family’s big fruitcake celebration happens the day after Thanksgiving, when she, her parents, siblings, her aunt and cousin get together to make a big batch.

“When everyone else is out shopping and lining up at Walmart to buy new TVs or whatever, we get together and make fruitcake,” King said.

And that big lot isn’t just for them. Loaves of fruitcake are packaged and mailed to the rest of the family across the country so they can have it for Christmas.

“We mail it everywhere, from Alaska to New Mexico, Montana, Georgia, Texas, Boston. It’s mailed everywhere, wherever the aunts live,” King said. “And, you know, one of my uncles may or may not use it as a doorstop, but most people love it because it’s a tradition.”

Fruitcake means so much to King that he has found ways to celebrate it outside of the holiday season. A couple of years ago, his family and friends rode in RAGBRAI, the Record’s Great Annual Iowa Bike Ride, under the name Team Fruitcakes, and shared their loaves with their team and the people they met along the bike route. almost 500 miles.

“It was a great way to introduce fruitcake to a group of family and friends who didn’t know anything about fruitcake. [who] I also had this idea, this kind of misconception, that fruitcake was gross and like something old and heavy that’s not relevant anymore,” King said.

King even served fruitcake at his wedding and people asked him for the recipe afterwards. She said she was happy to share the recipe and remember the women in her family who made it before her.

“If you look back in history, the stories of the women are dwarfed by the men in their lives … and so, for me, it’s a way to honor and remember and present their stories,” King said. “My grandmother, my great-grandmother, even my aunt and my mom. It’s a way of thinking about them and their importance and their role in my life.”

Grease and flour 6 to 8 loaf pans, depending on size (or use parchment paper to line bottoms for easy removal).

In another bowl, mix 2-3 cups of the flour with the spices. Combine your fruit with the flour and spice mixture.

In the largest bowl you have (a clean turkey roasting pan works well), slowly add the shortening mixture to the flour-fruit mixture until just combined. Gently add the egg whites, the water-baking soda mixture, and the juice.

Divide the mixture between the loaf pans. Bake at 300 degrees for 30 minutes, then reduce heat to 275 degrees. Large loaf pans can take 2 1/2 hours to bake. Small loaf pans will be ready sooner.

Watch for the lids to crack (a sign they’re done!) and check them periodically with a toothpick.