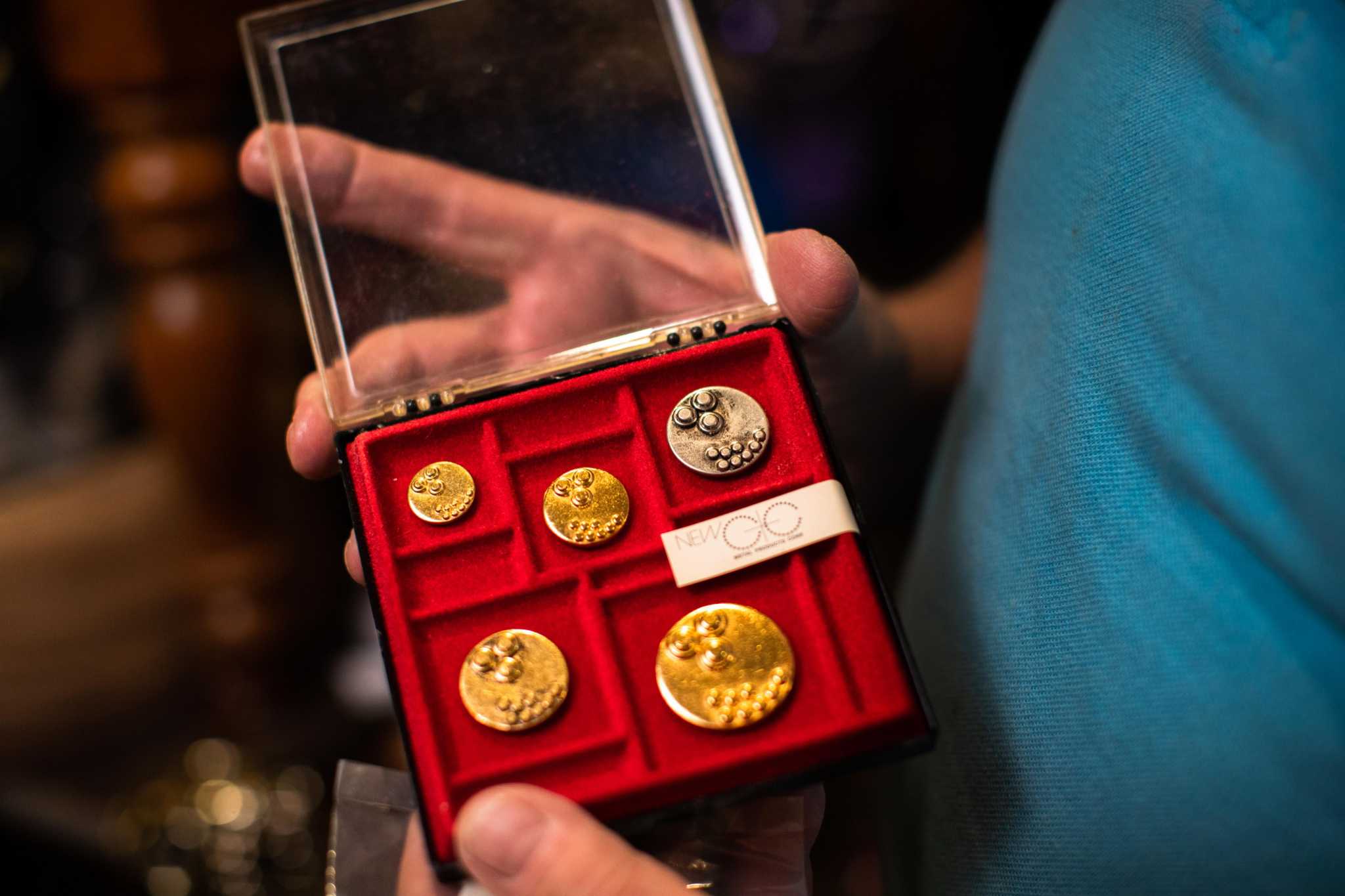 Dan Gorelick estimates that he has hundreds of thousands of buttons. His impressive collection, with glass buttons made in the Czech Republic and unusual styles from India, dates back to the 1940s.

Houston’s self-proclaimed “King of Buttons” once operated a manufacturing business in the New York City area, producing women’s clothing for retailers like JCPenney and Sears.

It was industry practice at the time, Gorelick says, for button dealers to offer exclusive styles to manufacturers like himself, so their clothing designs would be unique.

During his decades in business, Gorelick, who later owned a dressmaker’s and tailor’s supply store after moving to the Houston area, amassed a treasure, never throwing away samples he received and developing “a taste for unique buttons.

Gorelick, 80, trained in the industry by taking night classes in grading, pattern making and design at the Fashion Institute of Technology and Parsons School of Design. She shares stories of young designers she’s crossed paths with, like Anne Klein and Donna Karan.

At 18, Gorelick says he became the youngest member of the cutters’ union, following his father’s career path. “I’ve done everything in the garment industry,” he says. “It was in my blood, I guess.”

In the 1960s and 1970s, many of Gorelick’s industry colleagues went out of business due to rising imports, he says. Gorelick began going door-to-door in Manhattan’s Garment District, negotiating deals for boxes of unused buttons because he didn’t want the supply to be thrown away.

He also went to manufacturers’ auctions, where he bought buttons by the truckload. Because the buttons he bought were exclusive to the garment maker he once owned, he says, no two boxes in his collection are alike.

In one lot at auction, he says, he could have been left with 10,000 buttons, without first seeing the contents.

“I’m selling something that no one else in the world is selling,” says Gorelick who, now in “semi-retirement,” operates a shop within Cinco Ranch’s Painted Tree Boutiques, a collective.

While most of his buttons were made in the United States, including wood and glass bead styles, his collection includes rare two-piece and three-piece buttons from Paris that are put together for use.

“You can’t do stuff like that anymore because it’s too expensive,” he says.

It also has metal buttons in unusual shapes, such as a ram’s head, a tortoise shell, or a cowboy boot.

A mid-century daisy has a different colored stone for each petal. Oversized geometric and square buttons in bold colors evoke 80s shoulder pad fashion. It features buckets of milk glasses and carnival glass buttons. Some buttons have exquisite details, like a cluster of tiny rhinestones in the center.

He considers his crystal buttons from the Czech Republic precious. Some of their cloth-covered buttons are over 100 years old.

Also in the Gorelick collection are reams of 100% cotton lace trimmed with metallic thread, ribbons and other vintage embellishments. He has yards of fabric, like scraps of 16-ounce heavy denim he bought from Lee, the jean brand.

How many buttons does it have? “There’s no way for me to know,” she says. “Buttons are small, no one knows how many are in a box. And I have boxes that I can’t lift.”

From their home in a senior community in Katy, Gorelick and his wife, Charlotte, a cancer survivor, pack and price each button to be sold in their store.

“We keep busy,” says Gorelick. I give them a very fair price.

A bag of a dozen buttons starts at $1. Among the rarest, a set of four carnival glass buttons sells for $6.

Customers looking for it are often artisans who use the vintage buttons to make earrings, bracelets, and brooches or buy them to cover picture frames, art frames, and vases.

“I appreciate it when someone else likes what I like,” says Gorelick, a conversationalist who engages shoppers by assuring them that the buttons they’re looking for are the only ones of their kind.

“’That’s an incredible statement,’” they tell him. “‘How could you say that? The world is a big place.'”

Gorelick explains that the buttons were unique tokens from his New York City garment-making days.

If you can find that button or something similar on the Internet, you can have it for free, he tells skeptics.

“They’ll be standing there for 20 minutes” scrolling unsuccessfully on their phones, he says with a laugh.

The Gorelicks, who have great-grandchildren who live near them in the Katy area, recently sold their large warehouse and the property it’s on, prompting Gorelick to dispose of much of his collection.

the king of buttons

“I have to start chilling now,” says Gorelick, who has donated large amounts of fabric to local charities. He estimates he has 50,000 yards left.

“I have to close my eyes, says my wife, because I love my things and I remember when I bought everything.”

Cataloging the buttons means surprises and memories along the way.

“I bought boxes of buttons that I didn’t know what was inside,” he says. “I still have boxes that I haven’t opened.”

Allison Bagley is a writer based in Houston.

See also  How to build a lifestyle empire, according to Bethenny Frankel