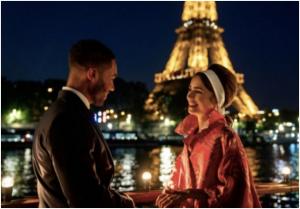 Shinsegae International’s luxury beauty brand “Poiret” supported the production of Season 3 of the Netflix series “Emily in Paris” as a Product Placement Sponsor (PPL). Released on December 21, the drama is about an American woman who works in Paris. Currently, the show ranks first in the Netflix TV Shows category worldwide. This is the first time that a K-beauty brand has been listed as an official sponsor of a famous show outside of Asia.

Poiret is an independent cosmetics brand launched by Shinsegae International in March of last year. The French fashion brand “Paul Poiret”, which was acquired by Shisegae International, was reborn as a beauty brand. Currently, the new brand has a total of four stores in Korea and plans to open a store in a department store in Paris next year.

Shinsegae International aims to build Poiret into a global luxury brand. To this end, most of Poiret’s products are produced abroad, such as Italy and Switzerland. Global companies such as Intercos are also in charge of manufacturing them.

Korean cosmetics companies are targeting Europe and North America due to their high growth rate. According to the Korea Customs Service, the amount of Korean cosmetics exported to China between January and November 2022 was USD 2.9 billion, down 24% from the same period last year, while exports to the United States (USD 643 million) and France (US$48 million) inflated by 7 percent and 6 percent, respectively, during the same period. China still accounts for a large share of Korea’s cosmetics exports, but industry experts predict that China’s share will gradually decline due to the growth in sales of Chinese cosmetics companies in China.

Amorepacific has also made a big bet on e-commerce market penetration in North America. The Korean cosmetics giant has focused on promoting its brand and now intends to make a profit by selling its products through online stores like Amazon. As a result, as of the third quarter of this year, Amorepacific’s sales in North America and Europe grew by 97% and 60%, respectively, compared to the same period in 2021.

LG Household & Health Care knocked on the door of the North American entry-level beauty care market by taking over the commercial rights to “Physiogel”. She plans to enter the color cosmetics business next year. To do this, it acquired the local cosmetics brand “The Crème Shop” in April. In particular, it began selling household items such as detergents at the Avon Official Mall, its North American subsidiary, and is consolidating its position as a lifestyle brand beyond beauty care.

See also  64,000 women still die each year as a result of clandestine abortions