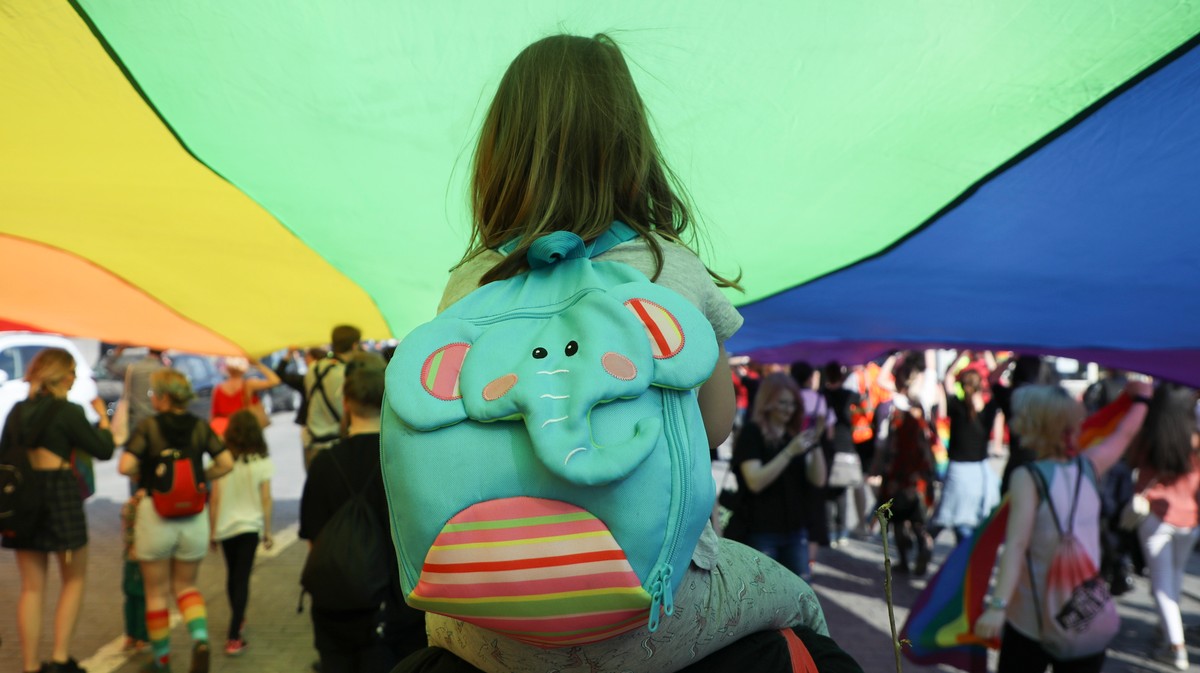 Evan Greer is the deputy director of the digital rights nonprofit organization fight for the future.

Queer and trans people are facing unprecedented attacks across the United States. Five of us have just been murdered in a queer nightclub in Colorado, right-wing militias are showing up with guns at drag events across the country, and Republican politicians are pushing laws ban daytime drag shows, criminalize trans health care, and threaten to separate families with transgender children.

Unthinkably, in the waning days of their majority in Congress, top Democrats are pushing a bill that would further hurt LGBTQ children and teens. Numerous reports indicate that the Democratic leadership is trying to impose the Children’s Online Safety Act (KOSA) as part of the mandatory year-end defense spending package.

KOSA would not make children safer online. Instead, it would subject children and adolescents to increased surveillance, make them more vulnerable to hackers and intruders, and cut them off from valuable online resources and communities. KOSA it would hurt LGBTQ children more by empowering Republican attorneys general to crack down on important resources for trans and queer children and teens, such as support hotlines, gender-affirming care resources, health information, self-help groups, fundraising efforts and more.

First, let’s be clear about a few things. One: big tech companies are hurting children. Surveillance capitalism and monopoly abuse harm everyone, and children are particularly vulnerable. Two: We need urgent action from Congress and the Biden administration to crack down on the harmful business practices of companies like Google, Meta, Amazon, Facebook, and Apple. Three: Many of the parents and groups advocating for KOSA mean well and seek to address real problems, such as platforms designed to maximize engagement and algorithms driven by data collection that are manipulative and addictive. There are real stories of trauma and harm related to Big Tech’s reckless business practices.

But instead of actually protecting children, Congress seems willing to use them as pawns to speed through legislation that will do more harm than good.

KOSA would create a broad legal “duty of care” requirement for companies to design their platforms with the “best interests” of children in mind. That sounds reasonable in theory, but here’s the rub: There’s no clear legal definition or global consensus of what that means. And the bill leaves it up to state attorneys general to decide what’s best for young people. Right-wing attorneys general like Ken Paxton of Texas and Leslie Rutlege of Arkansas have made it very clear how they would use that power if granted: to attack trans and queer youth and crack down on online discourse about abortion, health care, and LGBTQ rights. The hyper-conservative Heritage Foundation is calling openly for KOSA to be used against the trans community.

This approach to duty of care is fundamentally wrong, and not much can save it.

That’s because a obligation to care it is nebulous and rarely certain until applied to specific facts and decided in court. That uncertainty allows right-wing AGs to fall back on whatever definition suits their political goals. We’re already seeing language stretched this way, with drag shows being falsely maligned as “grooming events” and medically recommended gender-affirming care labeled “child abuse.” As we saw in the wake from SESTA/FOSTA, corporate platforms would not respond to KOSA by making their products more secure, but by making the companies themselves less susceptible to legal risk. Platforms like Facebook and YouTube would rather shut down spaces where LGBTQ+ youth gather online than fight costly legal battles with politically motivated AGs.

The duty-of-care approach poisons other aspects of the bill as well, potentially leading to increased vigilance in a bill that purports to protect children’s privacy. Under the current framework of the bill, the only way for most platforms to comply would be, ironically, increase surveillance of young people and collect more of their sensitive data. Invasive age verification measures are largely incompatible with anonymity, which is essential for global human rights and freedom of expression. And third-party providers are eager to exploit these new requirements. One company is already saying that it will provide biometric verificationthat scans your face every time you visit a website to check your age.

As written, KOSA could also prevent platforms from adopting end-to-end encryption, weakening the security of young users and exposing them to stalking and worse. Encrypted messages are essential to the safety of LGBTQ people, and human rights groups have been highlighting its importance in the wake of the overturning of Roe v Wade, after Facebook delivered messages between a teenager and her mother who were being prosecuted under a draconian anti-abortion law.

KOSA’s requirement to provide parenting tools at the platform level is also problematic as written because it provides multiple avenues of abuse against LGBTQ+ teens. For example, if a parent is hostile to a minor’s sexuality, she could use these tools to prevent the minor from accessing information necessary for her mental and physical well-being. This can even extend to situations where a child lives with a supportive parent, but the non-custodial parent requests and obtains control over the child’s account. Who has custody and who has parental rights will be difficult, if not impossible, for the platforms to figure out. There may even be situations where an abusive non-biological adult can gain control over a minor’s use of a platform, such as a former lover of the minor’s parent. It could also affect non-minors, such as trans teens who come of age and have to move for their own protection. Her abusive parents might try to convince the platforms that their child is still a minor in order to exert control over her behavior even as they try to escape.

Parenting tools are easier to integrate into devices, which can be replaced in such situations, than platforms where accounts are often lifetime. Many platforms already offer parenting tools, and many of them could be improved. But creating prescriptive requirements for invasive parenting tools with no guarantees to prevent abuse will make children less safe, not more.

That’s why last week, more than 100 human rights groups, including the ACLU, GLAAD, GLSEN, the National Center for Transgender Equality, the American Library Association, and Access Now sent a letter to congressional leaders who oppose KOSA’s inclusion on the bus.

KOSA is a mess and should be permanently archived. But that doesn’t mean we should let Big Tech off the hook. We absolutely need lawmakers and regulators to act to protect children and adults from manipulative algorithms, privacy intrusions, and harm online. And thankfully, there are several bills that don’t have the same flaws as KOSA and would at least begin to address Big Tech’s abuses. Congress should strengthen and pass the American Data Privacy Protection Act (ADPPA). , a law a lot more understanding privacy bill that protects everyone instead of focusing exclusively on children, as well as antitrust bills that crack down on the monopoly power of Big Tech, the American Online Choice and Innovation Act (AICOA) and the Open Application Marketplaces Act (OAMA).

I am the father of a preteen. I worry about what my son will find as he explores himself and the world online. We all want the Internet to be safer for our children. But we also need policies that actually make sense and lead to the kind of world we want our children to grow up in. Our children deserve to be safe. They also deserve to have basic human rights and the ability to express themselves.