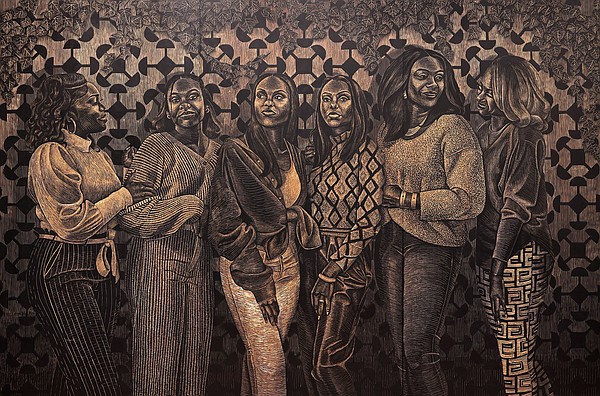 It’s a Friday afternoon earlier this month and LaToya Hobbs is at home in Baltimore helping one of her two sons with his math homework. When she asks how things are going, she replies herself, somewhat unconvincingly: “Uh, they’re fine.”

Hobbs, a Little Rock native and graduate of North Little Rock High School, may be more comfortable with her artwork than struggling with double-digit division. The 39-year-old engraver’s recent pieces have received high-profile attention.

Her 2019 woodcut, “Mrs. Burroughs,” is included in “The Power of Portraiture: Selections from the Department of Drawings and Prints,” a new exhibition running through February 7 at the Metropolitan Museum of Art in New York . With more than 60 works from the 17th century to the present, the show includes heavy hitters such as Francisco de Goya, Elizabeth Catlett, Eugene Delacroix, Pierre Bonnard, Willie Cole and others.

“Mrs. Burroughs” represents Margaret Taylor Burroughs, an educator who founded the DuSable Museum of Black History in Chicago. She was also a writer and visual artist, best known for her linocuts. Hobbs’s portrait was inspired by Burroughs’ 1956 engraving “Mother Africa”.

Hobbs, who is married to fellow artist and Pine Bluff native Ariston Jacks, was first exposed to Burroughs’ art while earning her master’s degree in printmaking at Purdue University, where she was working part-time at the Black Cultural Center of the school.

“I was put in charge of cataloging the works in their collection, and I found some works by Margaret Burroughs and the ‘Mother Africa’ print. What caught my attention was the stippling effect that she used to create the portrait of the figure in that work, and in my later work I began to experiment with that.” 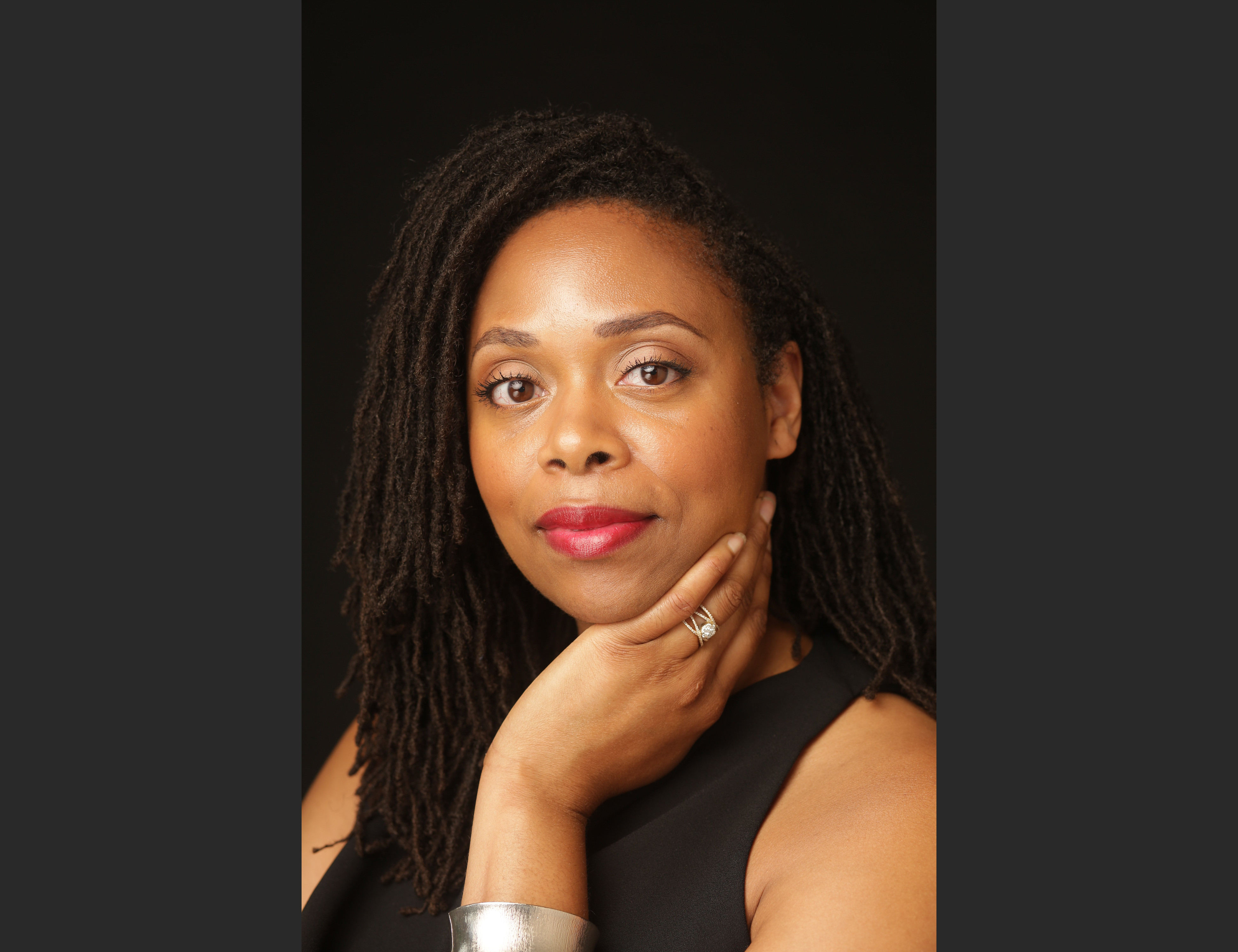 Artist LaToya Hobbs, a Little Rock native now living in Baltimore, creates woodcuts and black-figure prints. Her work is on display at the Metropolitan Museum of Art in New York and will be featured in the inaugural exhibition at the Arkansas Museum of Fine Arts in April. (Special to the Democrat-Gazette/Mike Jon)
Hobbs is a professor at the Maryland Institute College of Art in Baltimore and a founding member of Black Women of Print, a non-profit organization whose goal is to promote the stories and history of Black printmakers. “Mrs. Burroughs” was part of “Continuum,” the inaugural portfolio created in 2020 by members of the group that pays tribute to black artists and influences like Burroughs, Catlett and Emma Amos.

The portfolio is now part of the Met’s collection, and its images are at the heart of “The Power of Portraiture,” according to the exhibition’s metmuseum.org page.

“His etchings, along with those of Lorna Simpson, Charles White, Fred Wilson, and John Wilson, reveal the expressive potential of portraiture,” the page reveals. “By depicting both anonymous role models and well-known figures such as Malcolm X, Lena Horne, and Dr. Martin Luther King, Jr., these artists call attention to the relationship between representation and power.”

See also  'Shame on whoever did this'

“I was honored and truly blessed to see my work [with that of] many other wonderful and historical figures within the print medium,” she says. “It was a great experience.” 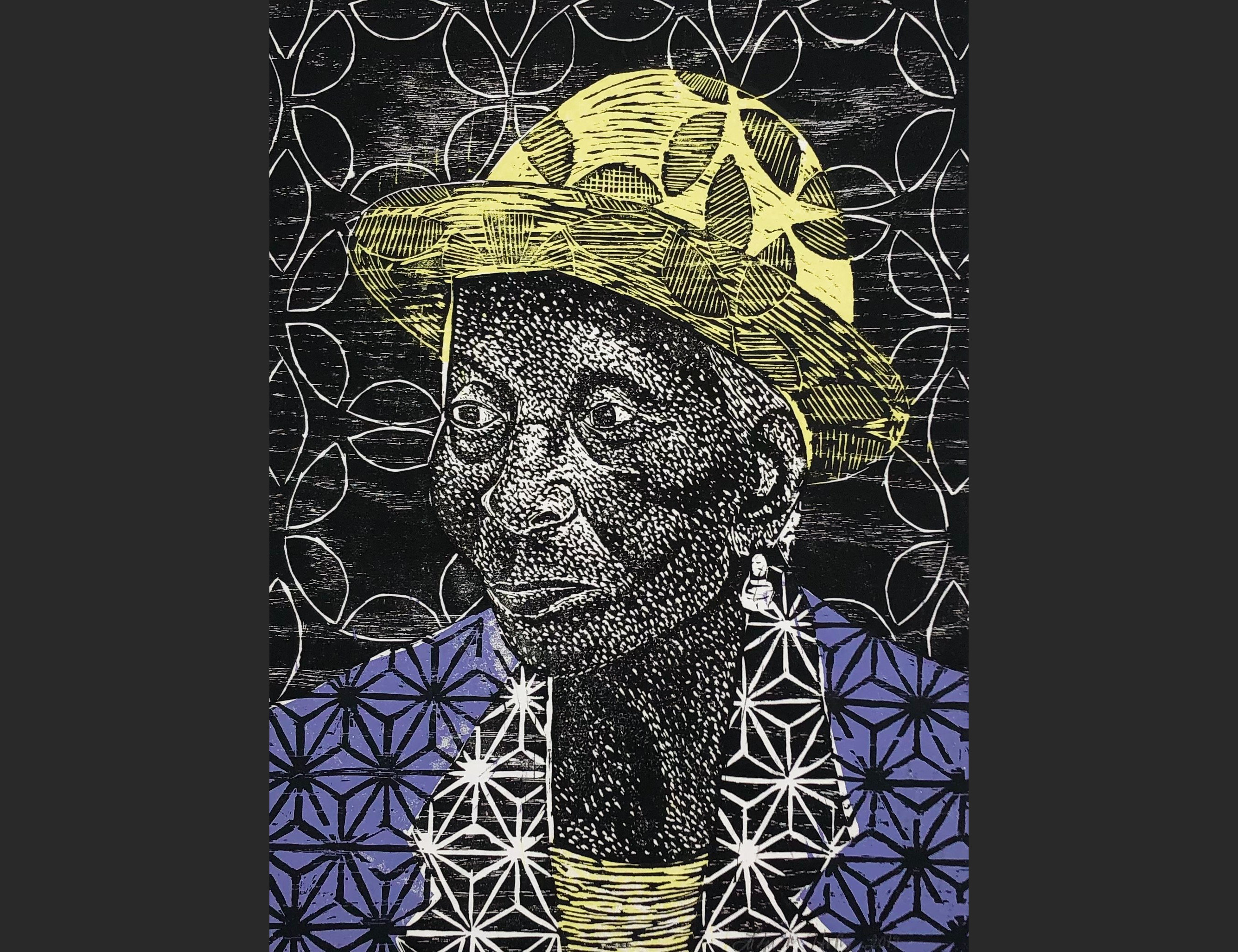 “Mrs. Burroughs”, 2019, woodcut by LaToya Hobbs, appears in “The Power of Portraiture: Selections from the Department of Prints and Drawings” at the Metropolitan Museum of Art, New York. (Special to the Democrat-Gazette/from the collection of the Met)
The Fine Art Print Fair of the International Association of Fine Print Dealers was also held at the Javits Center in New York at the end of October. It was there that Hobbs debuted “Genette’s Daughters,” his ambitious 8-by-12-foot relief woodcarving that was commissioned for the fair with support from the association. She also displayed a collection of prints she made of her fellow Black Women of Printmaking at the fair.

“Genette’s Daughters” depicts a group of six sisters whose parents, Dexter and Genette Howard, were pastors at a church Hobbs attended in Fayetteville. Hobbs did the piece after seeing a photo of the sisters posted online by the Howards.

“Last time I saw them, they were little kids,” she says. “Seeing the image of them as adults was a very nostalgic experience for me and played into some of the themes I was already exploring. These kinds of looks at Pastor Genette’s legacy and the role she played in my life when I attended her church and how that has spilled over to their children.”

To create it, Hobbs first drew the image in white pencil on a black-painted cherry wood panel. He then painstakingly carved it into the panel.

“I take what would be considered the matrix (the block of wood) and present it as the final artwork,” he says in an email. “I take the element that I love the most in my printmaking practice (the carving process) and put it on display.”

“‘Genette’s Daughters’ turns the world of print on its head by revealing not the print but the matrix as the art object,” Jenny Gibbs, chief executive of the print dealers association, said in a 1stdibs profile of Hobbs. com.

Says Hobbs, “I still do traditional prints where I carve out a block in order to produce an edition of works on paper, but I also like working with wood paneling because I can do all the processes I love and enjoy on the same surface. : I can carve on it, I can paint on the surface, I can make a collage…”.

The piece also fits with the idea of ​​the matriarch and motherhood, two areas Hobbs says she has been investigating in her work.

See also  All eyes on the newcomers, but don't forget the returnees

“Sometimes my projects would turn out really well and other kids would say, ‘Can you help me with mine?'”

She liked to draw and took art classes through middle and high school, but decided to study biology when she enrolled at the University of Arkansas, Fayetteville.

“Growing up, I sang in the choir, I danced, I did art, but I didn’t really have examples of that being a career,” she says. “I thought, well, I’ll major in biology and go to medical school.”

Eventually she realized that biology wasn’t the best path and started enrolling in art and dance classes to do something fun. After transferring to the University of Arkansas Little Rock, where she met Jacks, her attraction to her art became too strong to ignore.

“Art seemed like the best thing for me and I started making changes,” he says.

One of his teachers was Aj Smith, who met Hobbs when he was modeling for his drawing classes.

Hobbs earned a degree in painting from UALR, but it was also there that he discovered printmaking.

“Although I was a painting student, we had to take other courses of study, including printmaking,” she says. “Honestly, I didn’t like it at first.”

But then Smith introduced him to Catlett, the sculptor and printmaker whose figurative works represented the black experience. It was a revelation for Hobbs.

“Seeing his work, the technical skill and mastery, how familiar his images were, I felt like I was seeing a reflection of myself and my family. He just ticked a lot of boxes for me.

“It was also at that time when I was really trying to develop my own sense of identity as an artist and my own visual language, and deciding what I wanted to say. I thought, I want to make images like these.”

The highlight of visiting the “The Power of Portraiture” show, he says, was seeing two of Catlett’s works: the 1953 linocut “Sharecropper” and “Lovey Twice,” a 1976 lithograph.

“I had only seen [‘Lovey Twice’] in the textbooks, so to have an in-person experience with that work was really special.”

Like Catlett, Hobbs’s work focuses on black figures and portraiture.

“I feel like portraiture has always been the thing, as the greatest achievement… when you can draw a good portrait, you’ve come to this place of being a good artist. I love seeing different kinds of other people’s work, but in terms of what I do, the figure and the portrait have always been central”.

Smith is impressed by his former student. He sees Hobbs taking over from artists like Betye Saar and “running with it”.

“I think she’s doing very solid work right now. Being a woman in the early stages of her career, as well as being a mother and a college professor, is a tall order. She’s very invested in representing herself as a female artist, trying to communicate a message about female artists, as well as African-American artists, that has been neglected for far too long.” 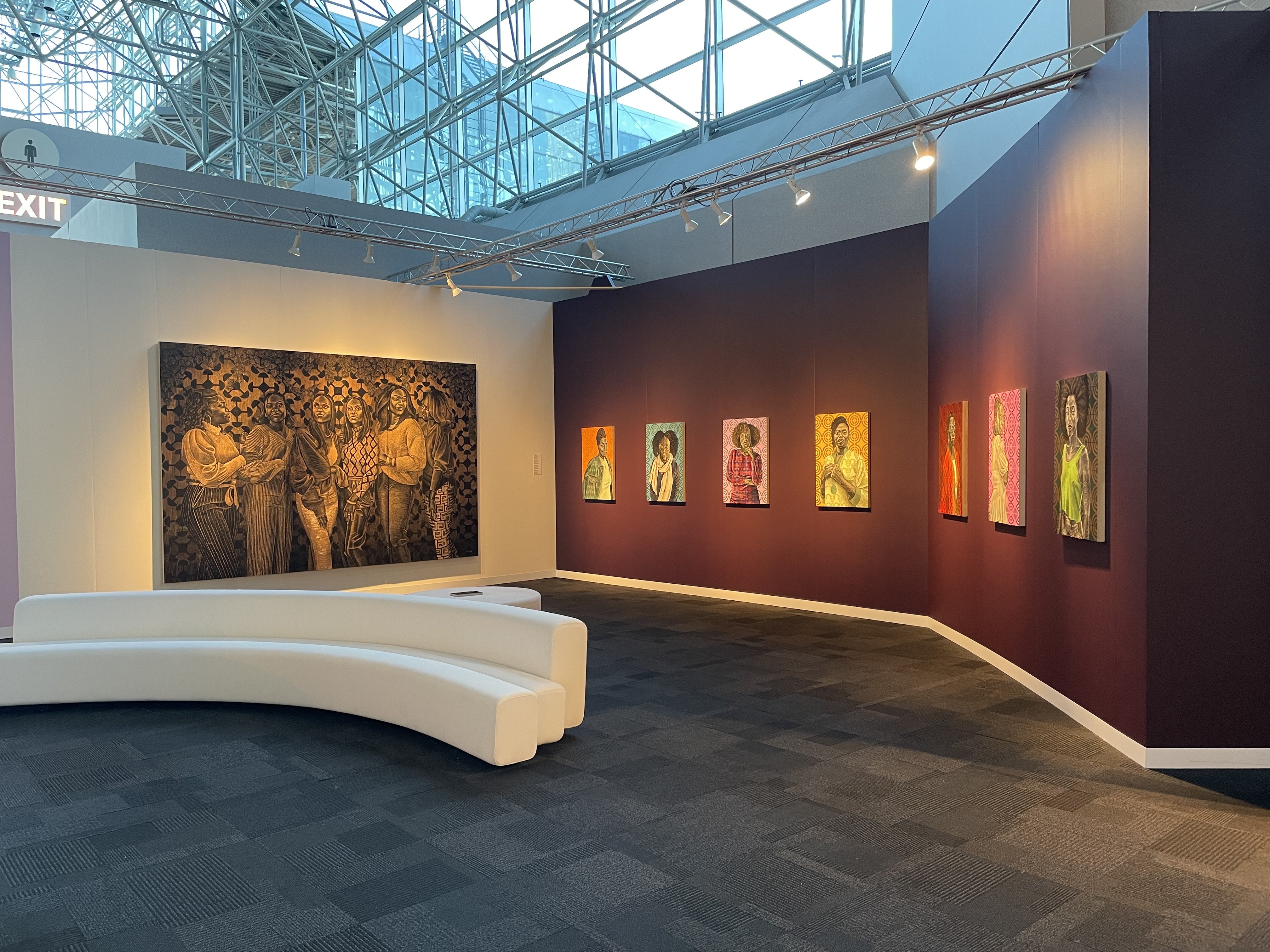 This is an installation view of works by LaToya Hobbs last month at the International Association of Fine Print Dealers Fine Art Print Fair at the Javits Center in New York. (Special to Democrat-Gazette/Ariston Jacks)
There is a childhood event that Hobbs suspects might have had an effect on the way he works today.

“In kindergarten, there was a coloring book on our supply list. My dad bought me a big coloring book about giraffes and I liked the fact that mine was so much bigger than everyone else’s. I don’t know , maybe subconsciously that could be a seed of why I like working so much now.”

Like, really big. Do you remember that “Genette’s Daughters” is 8 feet by 12 feet? Well, her woodcut, “Carving Out Time,” reaches mural proportions, stretching across five 8-by-12 panels to show a day in the life of Hobbs as an artist and mother and depicts her, Jacks and his sons.

A print of the first panel, “Morning,” will be included in “Together,” the inaugural exhibit at the Arkansas Museum of Fine Arts, which reopens April 22 after nearly three years of renovations. Hobbs joins Elias Sime, Ryan RedCorn, Oliver Lee Jackson and others on the show.

“It seemed to fit the bill,” says Brian Lang, Windgate Foundation’s chief curator and curator of contemporary crafts at the museum. “The ‘Morning’ scene perfectly illustrates the theme of the exhibition, which is loosely organized around three aspects: together with family, together with community, together with nature… LaToya is an artist who is pushing the boundaries of limits of printmaking today, and pushing herself as an artist by working on such a large scale. We felt it was important to recognize her for that.”

It is not the first time that his work has been shown in space. She was twice chosen for the annual Delta Exposition when the museum was known as the Arkansas Center for the Arts.

“I’m very excited about the newly renovated space,” says Hobbs. “I took a tour of the museum on a home visit earlier this year and even in its unfinished state it looked really amazing…To have my work featured in the inaugural exhibition…it’s very special to me because Arkansas is my state hometown and I am so excited for my family, friends and museum visitors to see how my practice has evolved.”