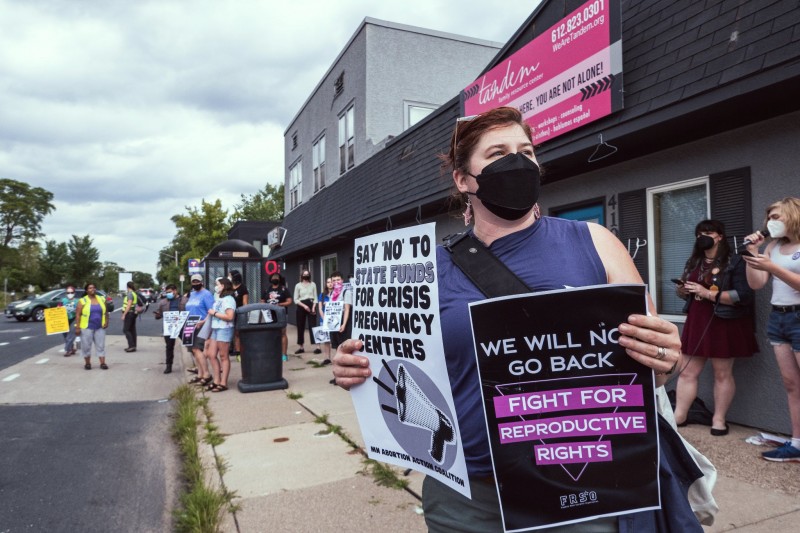 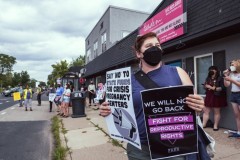 Protest in Minnesota against attacks on reproductive rights. (Fight Back! News/staff)

Minneapolis, MN – Songs of “When abortion rights are under attack, what do we do? Get up and fight!” could be heard up and down Chicago Avenue and 41st Streets in South Minneapolis on Thursday, August 18, as 40 protesters gathered outside the Tandem Family Resource Center, one of Minnesota’s now-infamous “crisis pregnancy centers,” for a demonstration in favor of reproductive health and women. Rights. The action was organized by the newly formed Minnesota Abortion Action Coalition (MNAAC) to demand an end to state funding for Tandem and other “crisis pregnancy centers” like it.

A chorus of honks greeted the protest, many drivers raised their fists in support, some passing neighbors expressed their support for the action and thanked the protesters for being there. Signs dotted the crowd, with several protesters carrying buttons and signs with slogans such as “Fund Abortion, Not Fake Clinics.” After several volleys of chanting, the masters of ceremonies introduced the first speakers and the action got under way.

Speaking on behalf of the Minnesota Immigrant Rights Action Coalition, Montana Hirsch made it clear that the fight for immigrant rights and abortion access are inseparable, also noting that “crisis pregnancy centers such as Tandem, which exist in close proximity to a largely Spanish-speaking immigrant community, are intentionally misleading, not only to English speakers, but even more so to those who are not native English speakers.”

David Gilbert-Pederson, speaking for MN Workers United, outlined the obvious connection between the working class struggle and the struggle for women’s and reproductive rights, explaining that abortion bans are only bans on working and oppressed people, while the rich continue with their businesses. as usual.

Echoing that sentiment, Olivia Crull of Freedom Road Socialist Organization explained, “The only reason we have these rights is because they were fought for and won through street fighting” and highlighted the need for a united struggle. : “We need a united struggle: we need a struggle that includes women, that includes trans people, that includes non-binary people because we must recognize that our struggles come from the same source.”

Other speakers included Sarah Olson of Women Against Military Madness, Gillian Rath of Students for a Democratic Society at the University of Minnesota, Jaelynne Palmer of the Twin Cities Coalition for Justice 4 Jamar, and Tracy Molm of the Climate Justice Committee. Speakers urged people to call the governor’s office to demand an end to state funding for these centers and funding for abortion clinics and health care. Flyers were distributed with the details of the call.

In its points of unity, the MNAAC describes these crisis pregnancy centers as “Organizations that use misleading names and advertising to lure those seeking abortion, only to persuade them to seek other options. The anti-abortion ideology of these centers takes precedence over the well-being of pregnant people who seek care in these centers, which means that they do not receive complete, accurate and evidence-based clinical information about all available options.”

As for state funding of these clinics, “In Minnesota alone, $3.4 million in state dollars goes to crisis pregnancy centers each year. We demand that Minnesota and all other US states stop funding these deceptive and ideologically motivated anti-abortion centers.” After the outcry and call-out campaign, the Minnesota Attorney General issued a consumer warning for these centers, but the Walz administration as a whole has yet to act on these lawsuits.

In the end, with the national and local resurgence of protests to defend women’s and reproductive rights in the wake of the Dobbs decision and the floodgate of anti-abortion attacks it opened, it’s clear that people are ready and willing to come out the streets and fight back

The Minnesota Abortion Action Coalition was founded after the Supreme Court overturned Roe v. Wade and the massive protests that followed, including a 10,000-person march led by the University of MN Chapter of Students for a Democratic Society. They, along with the Anti-War Committee, the Twin Cities Coalition for Justice 4 Jamar and other organizations came together to create a coalition to further the fight to defend and expand women’s and reproductive rights in the Twin Cities and the state of Minnesota at large. Follow them on Instagram, Facebook and Twitter and sign up for their newsletter on the mnaac.org website to stay up to date on their latest actions.