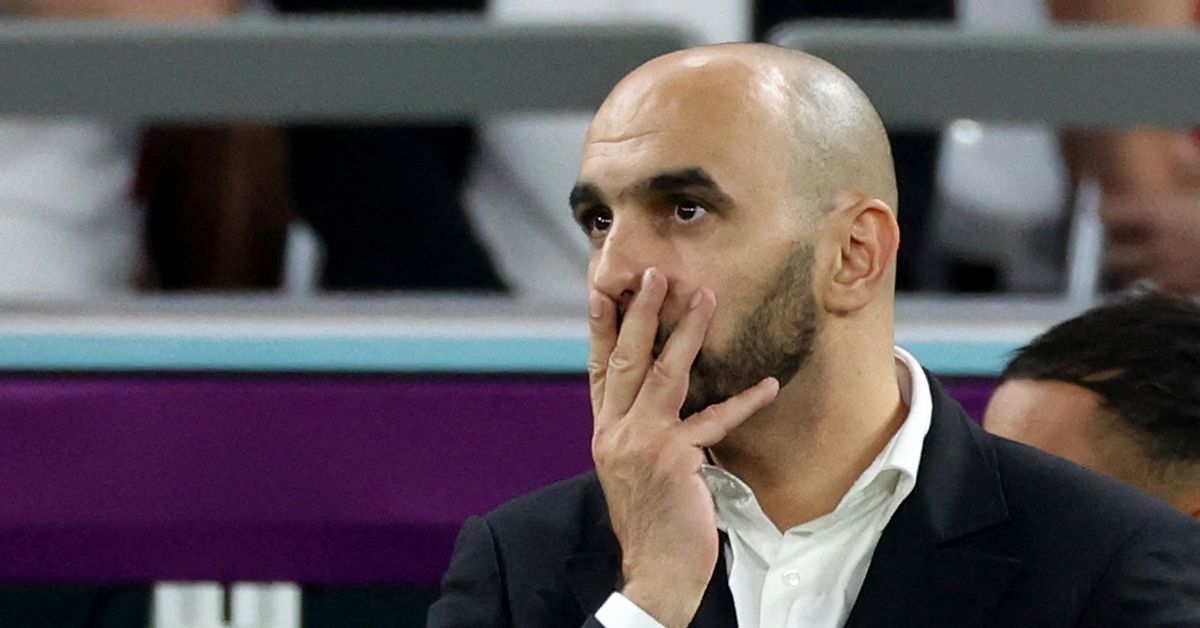 DOHA, Dec 7 (Reuters) – Thanks to Walid Regragui, the coach who made Morocco the first Arab nation to reach the World Cup quarter-finals, avocados may well be the nation’s favorite fruit.

When Regragui’s appointment was announced after the departure of Bosnian Vahid Halilhodzic in August, disappointed pundits branded him an “avocado head” as a derogatory and derisive term.

But the skinheaded coach, who mocked those critics at the Qatar tournament by holding an avocado with a soccer ball inside and pointing a finger at his head, has more than proven his credentials.

The previously unknown Regragui, who led Wydad to the Moroccan league and CAF Champions League double last season, scored a historic win against mighty Spain in the round of 16 on Tuesday.

The Atlas Lions put in an astonishing defensive performance, allowing Spain to have possession without threatening danger, before winning a penalty shootout to set up a round of 16 clash with Portugal.

Morocco first attracted attention at the World Cup with a goalless draw against Croatia, runners-up four years ago.

The 47-year-old coach spoke about how his team must develop a winning mentality and that Morocco would see how they fared against Belgium before their final group match against Canada.

The Moroccans, however, stunned the second-placed Belgians 2-0 to ease their passage to the round of 16 for the second time in their history.

Following another win over Canada, Regragui became the first Arab coach to lead a team to the knockout rounds.

“I told (my players) that we should be proud of ourselves,” Regragui said. “It is an opportunity that cannot be repeated. Unfortunately, I did not play in the World Cup. God has now given me the opportunity to make history as a coach. I am the happiest person in the world,” he said.

“I think Africans can go far, why not dream of winning the cup? We want the next generation to dare to dream.”

From the first minute against Spain, Moroccan football insiders sensed that the 2010 world champions had a long night ahead of them.

Regragui went for the usual mix of North African style, combining committed defense with counter-attacks led by Hakim Ziyech, who returned to the national team when Regragui replaced Halilhodzic.

But Regragui’s importance extends well beyond on-field tactics. He gives his team confidence and motivates them in his own unique way.

Regragui has managed to convince his players that they play for all of Morocco and as a result the team’s camp has been different than before.

Regragui decided to invite the families of the players to the camp in Qatar.

“I lived my life in Paris, but it was the first time I attended a tournament with Walid’s participation, either as a player or a coach,” Regragui’s mother told Moroccan television station Arryadia.

Although 14 of the 26 players in the Moroccan squad were born abroad, their love for their country is evident.

It is possible to feel the warmth between Regragui and his players during training as he treats them like friends.

“They like to hit me on the head,” Regragui said. “Maybe it will bring them good luck.”

At Al-Thumama Stadium on Saturday, the Moroccan, Arab and African world hope to continue the avocado-inspired fairy tale against Portugal.