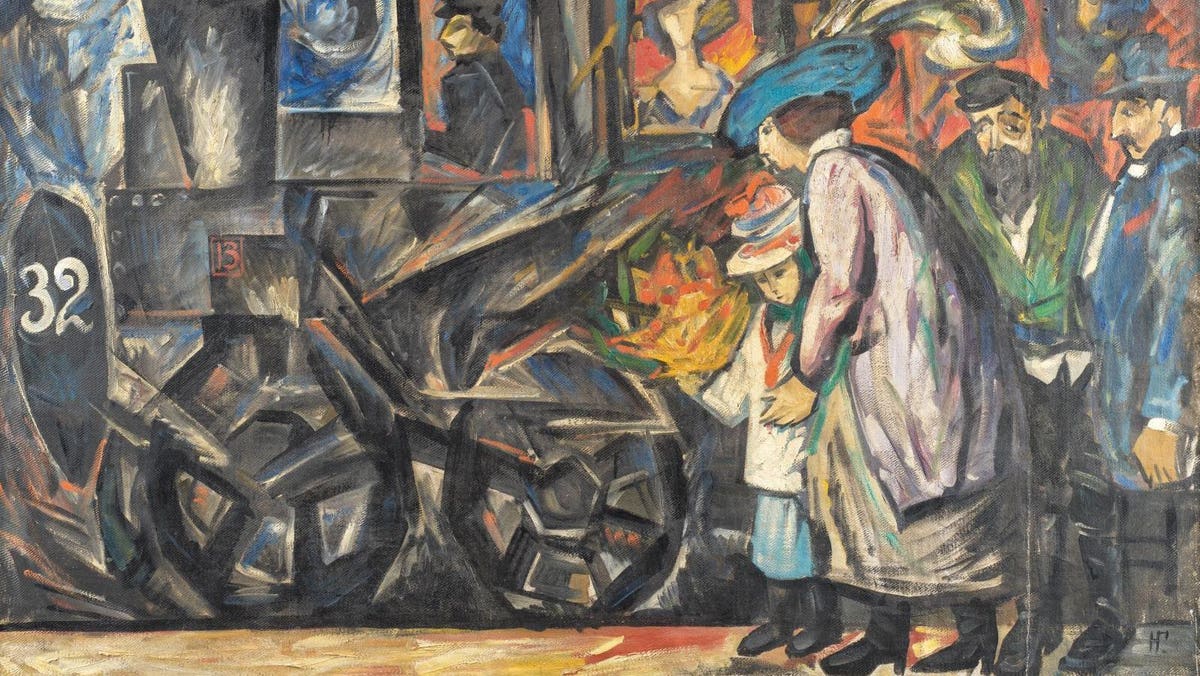 At the beginning of the 20th century, two rebellious and highly talented students, Goncharova and Mikhail Fyodorovich Larionov, met at the prestigious Moscow Institute of Painting, Sculpture and Architecture. They quickly became partners, sharing a studio and living space, and the art world was never the same. As founding members of Jack of Diamonds, Moscow’s first radical independent exhibition group, the lovers and collaborators struck with a mighty fist the firmly established foundations of Russian art. Always stirring up controversy while creating groundbreaking works, the couple settled in Paris, where they spent the rest of their lives.

Goncharova, a Russian avant-garde artist, painter, costume designer, writer, illustrator, and set designer, was also one of the founders, along with Russian artists Wassily Kandinsky, Alexej von Jawlensky, and Marianne von Werefkin, and German artists Franz Marc, August Macke and Gabriele Münter, from another radical art movement known as Der Blaue Reiter. She was born on July 3, 1881 in Nagaevo, Tula Governorate, part of the Russian Empire, she died on October 17, 1962 in Paris.

A pioneering Russian avant-garde painter, Larionov was also a founding member of an even more radical, but short-lived group called Donkey’s Tail, which included Goncharova, as well as Kazimir Malevich, Marc Chagall, and Aleksandr Shevchenko. They were influenced by the Cubo-Futurism movement, and the group’s only exhibition was held in Moscow in 1912.

Larionov, who was influenced by the Georgian artist Niko Pirosmani, painted in the style of Impressionism beginning in 1902, and after visiting Paris four years later, switched to Post-Impressionism and then to a Neo-Primitive style, partly derived from the Russian sign. frame. In 1908 he organized the Golden Fleece exhibition in Moscow, which included paintings by Matisse, Derain, Braque, Gauguin, and Van Gogh.

Together, Goncharova and Larionov developed an innovative style of abstract art known as Rayonism, after listening to a series of lectures on Futurism by Filippo Tommaso Marinetti, an Italian poet, publisher, art theorist, and founder of the Futurist movement.

Goncharova’s father, Sergey Mikhaylovich Goncharov, was an architect and also graduated from the same Moscow Institute where she and Larionov fell in love.

In 1915, Larionov left Russia to work with ballet owner Sergei Diaghilev in Paris at the Ballets Russes, obtained French citizenship, and never returned to his homeland. He was born on June 3, 1881 in Tiraspol, Kherson Governorate, part of the Russian Empire, and died on May 10, 1964 in the Parisian suburb of Fontenay-aux-Roses.

Fifty-five years after his death, the Tretyakov Gallery in Moscow hosted the first major Larionov retrospective in Russia, divided into a Russian section featuring mainly paintings and a French section, including paintings as well as a large collection of his works. graphics, many on public display for the first time. The French part also shows his works from the Ballets Russes, along with works by other artists from his private collection.

Larionov’s charming “A Walk Through a Provincial Town” (circa 1909) is feverishly inspired by his first visit to Paris in 1906. The bold, vibrant colors represent an extravagant, carefree lifestyle that is certainly refreshing for a native. Russian. The diversity of his work is marked in the Tretyakov Gallery exhibition featuring this painting.

His work is part of Russian art and objects dealer Christopher Martin-Zakheim’s extensive collection from his former Iconastas shop in Piccadilly Arcade. Martin-Zakheim was diagnosed with a brain tumor and consigned the remaining stock of his beloved store when it closed last year. He died on December 25, 2018.

The majestic Iconastas opened in 1974 and specializes in Russian art from the beginning of Christianity to the end of Communism. It’s where wealthy international collectors would find everything from Orthodox icons and crosses created from the 16th century to the 1900s, to Soviet porcelain figurines from the 1920s or precious Fabergé pieces.

More than half a century after their death, Goncharova and Larionov continue to intrigue and shock the art world, sometimes in curious ways.

For more than 50 years, “Still Life with Teapot and Oranges” was believed to have been painted by Larionov, but Aleksandra Babenko, associate specialist in Russian art at Christie’s, discovered that it had been painted by Goncharova. It was sold at Christie’s in November 2017 for £2.4 million ($3.1 million).

“The moment I saw the painting in the flesh, it took my breath away,” Babenko said. “The vividness and boldness of its colours, the accentuated ultramarine contours and the boldly angled composition – all exemplify the youthful fervor and rebellious mood within the Moscow art community at the turn of the 20th century.”