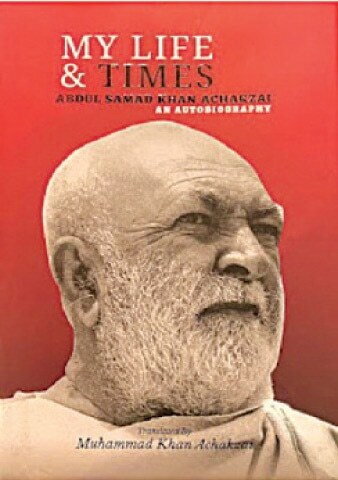 It is unfortunate that Balochistan, despite being Pakistan’s largest province and the richest in valuable natural resources, has been marginalized since colonial times. Sadly, the same is true for their remarkable personalities.

For example, many people are aware of Abdul Ghaffar ‘Bacha’ Khan, the ‘Frontier Gandhi’, and his association with the pacifist Mohandas Karamchand Gandhi. But nothing close to the same level of interest is shown in the ‘Gandhi of Balochistan’: Abdul Samad Khan Achakzai.

Perhaps this will change with the publication of Achakzai’s autobiography, My Life and Times. Originally written in Pashto as Zama Zhwand aw Zhwandun, the book has been translated into English by Achakzai’s son, and former Governor of Balochistan, Muhammad Khan Achakzai.

Divided into four parts, the book addresses, among many other things, the childhood, education and family of the nationalist leader; his involvement in politics and subsequent imprisonments; his newspaper and his fellow politicians; and his fights with his companions, second marriage in 1946 and events around Independence.

There is also a very interesting post Partition section, including his letters to the Quaid-i-Azam Mohammad Ali Jinnah and Liaquat Ali Khan, and his first arrest in the new country.

The translation of Abdul Samad Khan Achakzai’s Pashtun autobiography into English will allow a wider audience to appreciate the iconic role he played in Pakhtun history.

Abdul Samad Khan Achakzai was born on July 7, 1907 in the village of Inayatullah Karez, named after his great-grandfather, in the Qilla Abdullah district of Balochistan. He was a prominent journalist, writer, politician and, above all, a defender of the rights of the Pakhtuns and Baluchis during the British Raj, remaining so until his death.

Despite his conservative upbringing, Achakzai opposed discrimination against women in Pakhtun society and even dedicates his book to his wife, the “lady whose love, tireless dedication and unconditional adherence to Pakhtunwali [the Pakhtun code of conduct] that’s how it sweetened my life and [made] its easy way for me.”

Achakzai grew up in a culture where hunting was a way of life. The possession of and the ability to handle weapons and ammunition was considered an emblem of great courage and valor among the Pakhtun. However, inspired by Gandhi’s gospel of pacifism, he gave up the sport in 1930 when, in his early 20s, he “joined the national freedom movement which was based on tolerance and non-violence”.

One can discern his great respect for Gandhi despite the fact that Achakzai was never associated with the Indian National Congress. As he writes in the chapter ‘Meeting Gandhi Ji for the first time’, in July 1931, he went to “Bombay, via Sindh” after seeing in the newspapers

“The program of Gandhi Ji, who at that time was in Bardoli preparing to leave for Bombay in a few days, stopping for two days on the way at Ahmedabad.”

He further writes: “I imagined Gandhi tall and well built, like the officials and heads of the Muslim social elite that I had known up to now. But when I saw him, he was an ordinary human in appearance like everyone else. Putting aside his simple attire and his personal manners, which I was aware of, there was nothing outstanding about his person or his manners.”

The meeting happened at the Gujarat Vidyapith College. “[Gandhi] I spoke to us in a friendly and easy way and told him that the purpose of my visit was to inform him and all the leaders of India, who were going to London for the Round Table, of the difficult conditions in Balochistan, which was also part of the from India”.

Achakzai held Gandhi in such high esteem that he even adopted the wearing of khadi clothing and what was known as the ‘Gandhi cap’. By 1918, Gandhi had begun to advocate khadi (hand-woven and spun cloth) as a key element of the movement designed to boycott the use of imported materials.

The knitting not only lifted large numbers of people out of poverty, as it created a local industry and jobs, but also symbolized nationalism and anti-British sentiment. Therefore, wearing khadi clothing was considered a serious offense by the British, especially in Balochistan, where, thanks to no independent media and only government mouthpieces, they had greater power to deal with ‘rebellion’.

Gandhi knew this and declared: “The Baluchistan government will not tolerate you wearing this.” But Achakzai stuck to his wardrobe choice and paid the price for daring to be blatantly nationalist with repeated arrests.

Recalling events from personal life, Achakzai speaks frankly. At the age of 21, she went to her bridal chamber with no idea how to consummate a marriage. Later, when in Bombay [Mumbai] for political purposes, he describes how a well-known socialite asked him to stay behind, as she had “some work” with him.

Very disturbed by what she, a complete stranger, would want from him at such a late hour, he decided to leave. As a consequence of this, he writes: “After much consideration, I sought refuge in growing a beard, hoping that it would protect me from the negative intentions of liberal and liberated women.”

His mother was happy to see him with a beard when he returned to his hometown, and he quotes her as saying, “Wearing a beard is good, it distinguishes and separates men from women.”

Apart from Gandhi, Achakzai was also in love with the leader of the Congress, Dr. Saifuddin Kitchlew. She attended the 1929 Congress meeting in Lahore, where the Indian independence resolution was adopted, and found Dr. Kitchlew’s speech “the best”. Accordingly, when he was blessed with a son in the spring of 1930, she Achakzai named the boy Saifuddin.

Spending much time during the 1930s in Karachi raising awareness of the plight of the Baloch, Achakzai befriended AK Jangiani, a prominent newspaper reporter in the city’s political circles. After partition, Jangiani emigrated to India and became an editor of the Hindustan Times.

It was Jangiani who attached the appellation “Gandhi of Balochistan” to Achakzai’s name for the first time. The nickname quickly became a permanent fixture. “Friends and Hindus called me deputy out of love and respect, while my opponents used it bitterly,” Achakzai writes.

Achakzai spent extensive time in prison—starting with his first imprisonment in 1928, to prevent him from joining Afghan leader Ghazi Amanullah, who was trying to confront an uprising in his country—and often went on hunger strike to protest the inhuman treatment. of prisoners

He left formal education after the eighth class despite having all the means to continue, for although a degree would have secured him any lucrative government position, he did not aspire to serve the British. Instead, he became a self-taught journalist, and the prison served as his training institute for journalism and politics. After the Press and Publication Law was extended to Balochistan in 1935, he set up a printing press and began publishing a newspaper called Istaqlal.

In the same year, a violent earthquake struck Quetta, killing tens of thousands of people. One victim was Achakzai’s close compatriot Nawab Yousaf ‘Aziz’ Magsi, a well-known progressive writer and poet and founder of Baluchi nationalism. Achakzai was some 50 kilometers away at the time of the earthquake, imprisoned in Mach jail. Upon learning of the death of his dear friend, Achakzai decided to change the name of his press “‘Aziz Press’ in memory of Yousaf Ali Khan Magsi, because Aziz was the pen name Nawab Magsi used in his poetry. “.

Achakzai chaired the All India Baloch Conference, held in 1932 in Jacobabad, Sindh. Later, he became chairman of the Anjuman-i-Watan political party which, he writes, “independently decided not to help the British in [their Second World War] effort.”

However, when Gandhi “initiated his individual resistance (satyagraha), Anjuman offered the service of its 50 members to this movement.” The help was offered despite the fact that Anjuman had no organizational affiliation with Congress.

Much of Achakzai’s time was spent with his comrades at the forefront of Balochistan’s political struggles. These included progressive stalwarts like Mir Abdul Aziz Kurd, Sardar Amin Khosa, Mir Hussain Unka, and Mir Hasan Nizami, among others. But, after Partition, he moved away from the Awami National Party, formed in 1957.

His relations were not too notable with his Pakhtun brethren, especially Bacha Khan of the then North West Frontier Province (NWFP, now Khyber Pakhtunkhwa) because Achakzai advocated separating the Pakhtun areas from Balochistan and joining the then NWFP.

Achakzai dedicated his life to the great cause of his people, to conquering their rights through peaceful, democratic and non-violent means. He had laid down his arms in 1930 and never took them up again, even wandering the streets of his province, which was almost always in the midst of one turbulence or another, with no armed security to protect him.

Tragically, pacifism cost him his life. On the night of December 2, 1973, two hand grenades were thrown into his house, killing him while he slept. He was 66 years old.

The lives and struggles of people like Abdul Samad Khan Achakzai are reminiscent of a flower: the lily of the valley. It is one of the few flowers that can bloom in the dark. Like Achakzai, he began to speak for his people in the darkness brought about by colonialism and undemocratic forces in Pakistan. By translating the book into English, his son has brought the flower to light, as now an even greater number of readers can appreciate the role Achakzai has played in the history of Pakhtun and Baloch.

The reviewer is a staff member.
he tweets @Akbar_notezai