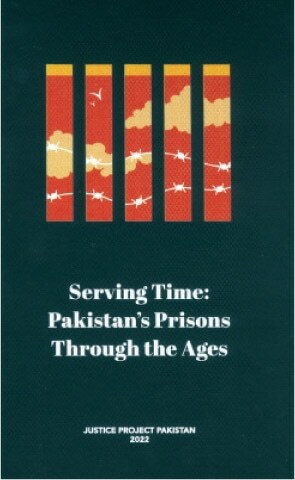 There are some people and institutions in Pakistan that restore faith in humanity. One would go so far as to say that it is institutions like these that keep the dream alive, against all odds.

To mention just a few, there is Edhi Foundation, Citizens Foundation (TCF), Saylani Welfare Fund, Sindh Institute of Urology and Transplantation (SIUT) and this reviewer’s pet project – Ayesha Chundrigar Foundation (ACF). ), who works for the voiceless in society and rescues animals suffering in appalling conditions.

Another name to add to this list is Justice Project Pakistan (JPP), which works for systemic reform of the country’s criminal justice system.

JPP uses “strategic litigation” and an extensive advocacy program to highlight the misuse of the death penalty in Pakistan, the incidence of torture in custody and the living conditions of those in prison. The organization publishes research and data, but has also used some innovative techniques to get its messages across; most recently, he created a multi-faceted interactive online campaign titled ‘This Is (Not) A Game’, showing how murder investigations can go horribly wrong.

In summary, JPP is an organization with clearly defined objectives and has gained recognition for some recent campaigns on death row prisoners. Now he has moved into more serious territory, perhaps even academic, with the publication of a book on Pakistan’s prisons.

An anthropologist examines Pakistan’s prisons and their history, primarily through the eyes of the inmates.

Time to serve: Pakistan’s Prisons Through the Ages is essentially an account of the experiences of 20 prisoners on trial and sentenced, in the four provinces of the country. But the book goes further, with a detailed explanation of how the prison system in the subcontinent evolved from the time of Mughal rule to the colonial era and beyond.

See also  Health considerations for countries hosting refugees and returnees due to the emergency in Ukraine and in the context of the COVID-19 pandemic, March 12, 2022 - World

Written by anthropologist Radha Shah, with editorial contributions from Sarah Belal, Aurangzaib Khan, and Ali Haider Habib, the book’s text is interspersed with commentary on how the sociopolitical histories of the four provinces have shaped more than just the way they are administered. Pakistan’s jails, but also the reasons why people are jailed to begin with. Suffice it to say that the circumstances leading to imprisonment are often murky.

The introductory chapter, ‘Prisons as Microcosms of Provincial and Federal Realities’, sets the tone of the book and also traces the history of criminal justice systems on the subcontinent. The author cites Dr. Satya Prakash Sangar’s well-known 1967 study, Crime and Punishment in Mughal India, to refute the thesis of many British writers of the time, that pre-colonial India was severely lacking in administrative systems and faced to “rampant crime”.

Instead, as the author’s alternative sources show, the local courts operated predominantly in accordance with the principles of Islamic civil and criminal law. The punishments were largely corporal, but also included prison sentences, particularly for nobles. The colonial administration initially used forms of punishment roughly similar to those used during the Mughal era, often involving gruesome public spectacles.

Describing his introduction to Karachi Central Jail, Malik said: “When we entered the jail, there is a line of officers waiting, and they beat us with sticks from that door to our room, and we are running, hoping that some way we can get out. to a place where we are no longer beaten. When we get to the barracks, they stop.” — Book excerpt

But the British also introduced the concept of “corrective” jails, largely with a view to reforming India’s “criminal classes.” These were basically tribes or groups of people who were marginalized in the caste system and whose often nomadic lifestyle did not conform to the British idea of ​​what a settled population should be like.

This tendency to assume geographic characteristics of the population is, according to the author, what dictates how modern Pakistani police analyze crime in different regions.

After a brief discussion of recent prison reforms, the main body of the text is presented in five chapters, each covering prisons and prisoner accounts in the four provinces, and an additional chapter covering female prisoners.

The author has an interesting approach, where each chapter begins with a short section on how the colonial authorities viewed crime in the province. Thus, in Punjab, the British had a problem with semi-nomadic non-property-owning groups (who were clearly marginalized in a predominantly agrarian society), and it was mainly these “criminal tribes” who were imprisoned for one crime or another. . In modern times, according to the author, this translates into the imprisonment of mainly marginalized groups and people from low-income households.

While most of the prisoners in Pakistan generally belong to low-income groups, other factors also come into play in other provinces. In Khyber Pakhtunkhwa and the former Federally Administered Tribal Areas (Fata), for example, militancy and dissent figure prominently in criminal trials and investigations.

Balochistan is the only province where the prisons are not overcrowded, but these prisons also have few or no facilities, and rehabilitation or correction is not even on the agenda. Is it because the prisons in Balochistan are also full of nationalists? Can’t say for sure, but that can be a factor.

Prisons in Sindh, more specifically Karachi, which the book focuses on, house all kinds of people, from political activists to common criminals jailed for petty crimes. But they also have some semblance of rehabilitation, even though the author clearly has a low opinion of the work, education, and recreational facilities that the prison authorities enthusiastically showed her.

The most moving sections of each chapter are the prisoners’ accounts. His stories are tragic, such as the account of the prisoner Ahmadi in Punjab, jailed on blasphemy charges and largely confined to his cell, perhaps for his own safety; shocking, such as a political activist’s assessment of conditions in Peshawar Central Jail; and heartbreaking, as the portrait of a woman raising a special child in a Karachi jail.

But there is also the occasional glimmer of hope and a sense that some humanity is still alive, as can be seen in the story of the District Superintendent of Police (DSP) in Khyber Pakhtunkhwa, who arranged for a small sum of money to be sent to a poor prisoner’s family each month, realizing that the prisoner had been forced to steal due to extreme poverty. Then there is the Christian prisoner who used the prison library to find out about his rights as a prisoner and demanded that the authorities build a small church for the prisoners belonging to his community.

These few instances aside, however, Serving Time is deeply depressing reading. However, it is crucial that your content is advertised as much as possible. If there is a point of detraction, it is that there is a thread of academic discourse running through the writing (the first chapter quotes from French philosopher Michel Foucault’s book Discipline and Punish), but it is not in the form of a well-defined thesis. . Instead, wherever the author tries to be academic, there is less forcefulness and more of a scattering of buzzwords.

Perhaps it would have been better to stick with a simple narrative and leave the academic foundations to someone more qualified. Having said that, Serving Time is an important addition to the criminal justice literature in Pakistan.