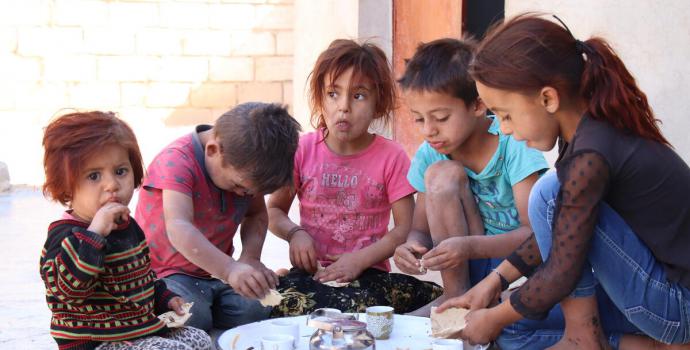 AMMAN, November 10, 2022- The number of malnourished children in northeast Syria has increased by more than 150% in the last six months, with at least 10,000 more children now facing malnutrition than in the previous six months, according to new data.[i].

The news comes as Syria faces its worst economic crisis since the start of the war in 2011 with 90% of the 18 million population living in poverty (UN)[ii].

Save the Children staff reported that the number of malnourished children screened at its 19 nutrition centers in camps in northeast Syria and in community settings quadrupled, from 256 to more than 1,000, confirming the same worsening trend.[iii].

Sara Ali*, nutrition specialist at Save the Children, said:

‘‘Every day we have to deal with more malnourished children than the day before. Malnutrition is a threat to children’s lives. Poverty and inability to pay for food are the main reasons families give for this increase.”

Over the last three years, the combination of conflict, drought, the Lebanese financial crisis and the COVID-19 pandemic have caused the Syrian currency to free fall to historically low levels.

While median household income hasn’t increased, food prices soared nearly 800% between 2019 and 2021[iv] and keep going up in 2022[v]This massive price increase is forcing an increasing number of people to go hungry.

Maha*, 30, works as a scavenger and struggles to make ends meet to feed her five children, including the youngest, Ameen*, who is malnourished.

“The war brought with it extreme hunger. before we I never had to worry about food availability despite being poor back then too.

‘‘Sometimes we skip meals to save something to eat for the next day. I don’t remember the last time my children ate meat or sweets. Sometimes they have a craving for meat and ask me to bring them some. I lie to them saying that I will do it the next day. I never. They won’t have anything to eat if I do. Our breakfast is always tea and bread only’”.

‘“After nearly 12 years of conflict in Syria, the worsening economic situation has become the main driver of need, despite continued armed conflict in many parts of the country. At least Currently, 60% of the population suffers from food insecurity and the situation is getting worse day by day.”

Save the Children calls on donors to step up efforts to address the hunger crisis and alleviate its devastating impacts on children. Although different organizations are working to provide food to the most vulnerable groups, the available resources are not enough to ensure that all children have access to balanced nutrition that is essential for their health and growth. The international community must urgently increase the availability of sufficient food for the most affected populations.

Save the Children is also calling the leaders gathering in Egypt for the COP27 climate change summit to acknowledge climate impacts already affecting communities and children around the world, such as the drought in northeast Syria, particularly those in low-income countries and those are affected by inequality and discrimination. Read more about our specific requests here.

Save the Children has been working in Syria since 2012, reaching more than five million people, including more than three million children across the country. Save the Children’s programming combines emergency and lifesaving interventions with early recovery activities that support the restoration of basic services, including child protection, education, emergency response, food security and livelihoods, sanitation of water and hygiene, as well as health and nutrition.

[iii] This increase may be due in part to a community outreach campaign that took place.