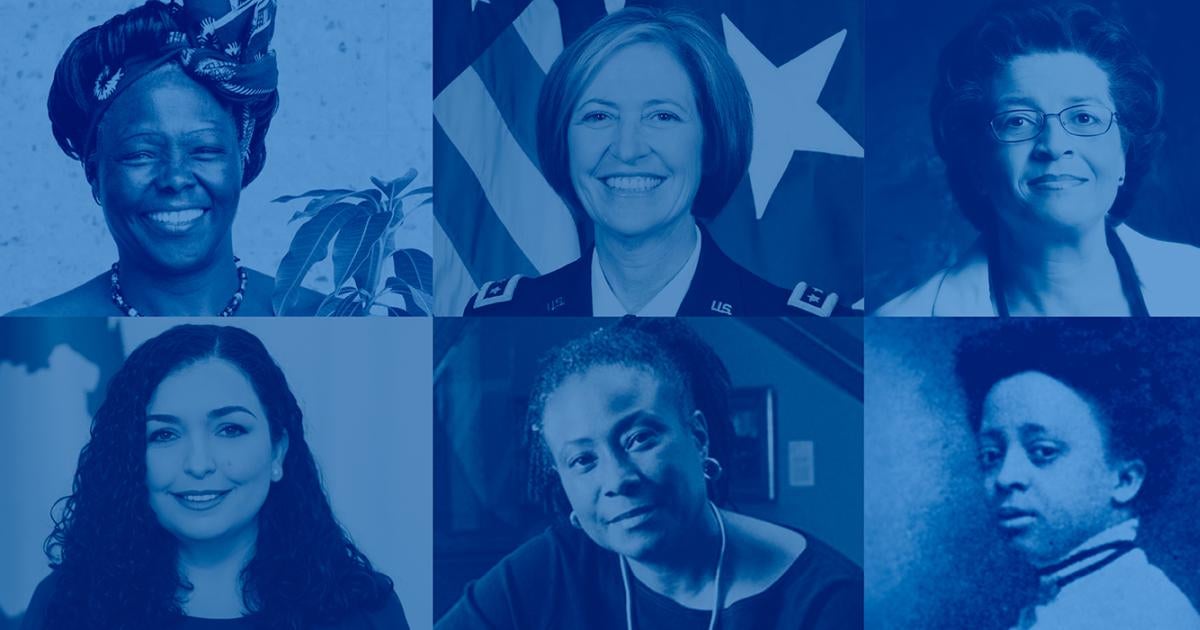 At a time when women are outpacing men in college applications and enrollments, and more women are holding high-profile leadership positions, one could be forgiven for thinking the battle for gender parity in academia has been won. However, there are many more barriers to break, research shows.

This Women’s History Month, learn about the lives of some of the incredible Pitt women whose pioneering work changed our past and is shaping our tomorrow.

Who would you highlight? Share your suggestions of notable Pitt women leaders past and present via email pittwire [at] pitt.edu.

Walls by Jean Hamilton, the first black woman to receive a bachelor’s degree at Pitt (1910), was also the first here to receive a doctorate (1938). She graduated from Allegheny High School in 1904 and majored in mathematics and physics at Pitt before earning her master’s degree from Howard University. She then returned to complete her doctorate in Pittsburgh. It’s almost impossible to overstate the structural limitations that Walls overcame to do what she did. Her enduring strength paved the way for thousands of black women in Pitt and beyond, throughout the last century.

In 1895, Margaret and Stella Stein they were the first women admitted to Pitt as full-time students. The sisters took all of the math courses offered, plus astronomy, mathematical chemistry, and surveying. They tied for first place in their graduating class and decided together that Stella should be valedictorian. Later, they would become the first women to earn master’s degrees from the University. Stella went on to teach modern languages ​​and mathematics at South High School, while Margaret was principal at Avalon High School.

In April 2021, Vjosa Osmani-Sadriu (LAW ’05, ’15) was sworn in as president of Kosovo, the second female leader of the Balkan nation. Osmani-Sadriu is one of the world’s youngest global heads of state. He is credited with helping achieve the declaration of independence for his native Kosovo from Serbia in 2008.

The soul lady of jazz music

At age 7, musical prodigy and famed jazz pianist Geri Allen sat down at her instrument for the first time, and music changed forever. She was named a Guggenheim Fellow in 2008, the same year she won the Distinguished Alumni Award from her alma mater, Howard University. Already a world-renowned musician, Allen (A&S ’85) became director of Pitt’s Jazz Studies program in 2013. She was the head of the department until his death in 2017. She has been described by more than one of her classmates as “the female Herbie Hancock on the piano” and is remembered by the university community as much for her compassion and humanity as for her musical genius.

A tree grows for a Nobel Prize

After earning his master’s degree in biological sciences in 1966, Wangari Maathai, born in Kenya she became the first woman in East and Central Africa to earn a PhD. She later founded the Green Belt Movement, which mobilizes Kenyans, many of them women, to plant trees, providing employment and renewable resources for their villages. Although Maathai was attacked and even jailed when her work clashed with powerful developers, she persevered and eventually became Kenya’s deputy minister for the environment and natural resources. She was awarded the Nobel Prize in 2004, the first African woman to receive the prize.

When Kathryn Reed (MID ’14, SHRS ’16) As an emergency medicine undergraduate student, she first met people who worked as Physician Assistants (PAs). She also realized that not many personal assistants of hers looked like her. This led Reed to found the National Society of Black Medical Assistants, an organization focused on diversifying the medical assistant student body by increasing the number of black students, providing mentoring and support, and improving health outcomes and disparities in black communities. In 2020, Reed shared her experience of being a biracial person in medicine as part of People magazine. Voices of the fight against racism. Reed is currently an Assistant Professor and Vice President for Equity, Inclusion, and Community Engagement in the Department of Physician Assistant Studies.

From nurse to general surgeon

Engineer and student of “biomimetics” Ana Balazs is the John A. Swanson Chair of Engineering in the Department of Chemical and Petroleum Engineering at the Swanson School of Engineering. An internationally acclaimed expert, her many accolades also include being the first woman to receive the prestigious American Physical Society Award for Polymer Physics in 2016. Most recently, she was named as one of the newest members of the National Academy of Engineering. : Less than a year after being elected to the National Academy of Sciences. Read more about Professor Balaz’s work on “soft robotics”.

A childhood family trauma introduced Alyson Stover to the power of occupational therapy (OLD TESTAMENT). A later life of study and practice convinced her that patient advocacy was absolutely as essential as your technical practice of occupational therapy. That would be a pretty complete slate for most OTs, but it doesn’t begin to describe all of Stover’s accomplishments. Stover founded and owns Capable Kids, a private pediatric outpatient practice north of Pittsburgh that provides speech-language and physical therapy services. She is also an Associate Professor in the Department of Occupational Therapy at the University of Pittsburgh College of Health and Rehabilitation Sciences. In July 2021, she began a four-year term as President-Elect/President of the American Occupational Therapy Association, which represents more than 100,000 professionals. Stover is the first Pitt faculty member to hold this national leadership position.

Caring for the Mind and Soul

In addition to her academic work and leadership in the field of mental health counseling, particularly in African-American communities, Assistant Professor Quiana M. Golphin researches the role of the spiritual in well-being. Golphin is an ordained minister at Deliverance Baptist Church in the Wilkinsburg neighborhood of Pittsburgh. She is also the leader of the Training religious leaders in grief counseling to enhance the program of treatment experienceswhich expands mental health services to reduce racial health disparities by training clergy and health care paraprofessionals in communities of color.

Research by Associate Professor Gina Ann Garcia, a leading scholar at Hispanic-serving institutions, has drawn attention to the role of these institutions in higher education and how they can support their students. At Pitt, she teaches courses in the School of Education on contemporary Latino issues and social justice in higher education, directs Pitt’s Hispanic Heritage Month celebrations, and advises the Latino Student Association. Garcia has received multiple grants and awards for her work, including the American Association of Hispanics in Higher Education Book of the Year Award and the Chancellor’s Distinguished Research Award.

Heal those who need it most

In her time as director of the Department of Family Medicine at Pitt School of Medicine, Jeannette South-Paul made clear his commitment to minority patients. Disparities in health care for people of color and minority genders “are vast and are not closing, unfortunately,” he told the Pittsburgh Post-Gazette in 2011. “And they tend to be concentrated in cardiovascular disease, cancer and health mental though [also] they exist in other areas.” Widely recognized as a speaker on sociocultural issues in health care, while chair of family medicine, South-Paul was one of the few African-American department heads at medical schools nationwide.

Voice activated technology has become a part of our everyday lives. For some, including those with disabilities and injuries, these can be vital technologies. This is where Dan Ding comes in. Ding’s research is changing the field of assistive robots and wearable devices to improve accessibility and promote broader wireless use. Ding is an associate professor and researcher in the Human Engineering Research Laboratories in Pitt’s College of Health and Rehabilitation Sciences. She is the principal investigator of a new Rehabilitation Engineering Research Center called Promotion of conventional wireless inclusion through technological services. The project received a $4.6 million grant from the Department of Health and Human Services in 2021.

In her writing, best-selling author Bebe Moore Campbell (EDUC ’71) explored racial justice, childhood obesity, and the strains in friendships between black and white people with fearless clarity. He shared the stigma of mental illness and childhood memories, particularly those spent in North Carolina with his father. Campbell came to Pitt from his hometown of Philadelphia in 1967 and graduated in 1971 with a degree in elementary education. He would later serve on the Board of Trustees and he donated his files to Pitt. Campbell died in 2006.

In 1946, Peg Covert did something no woman had yet done at Pitt: she joined the women’s track staff. By 1953, she would rise to the position of full professor. Despite resistance to the sport, Covert led Pitt’s first women’s cheerleading squad and pushed for equal sports facilities for men and women years before Title IX. In 1972, she became director of women’s athletics.