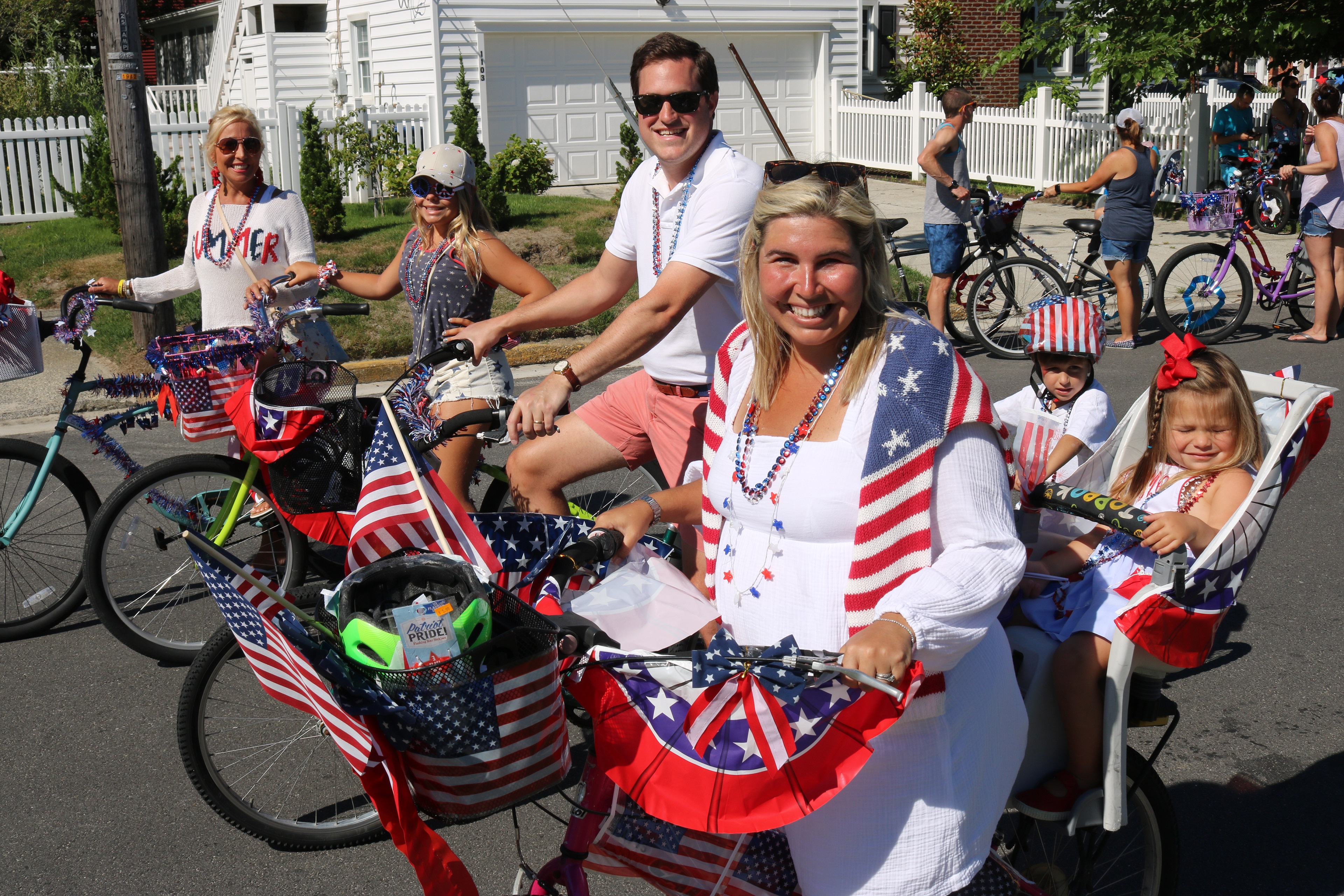 The sun was out and Ocean City vacationers and residents showed their true patriotic spirit with bike parades on the north and south ends of the city to celebrate the 4th of July.

He wore red, white, and blue streamers and bows on his bike helmet. And coming out of the sides of her bike were streamers, a couple of flags, not to mention her shirt and star-studded pom-poms.

“We were sitting on my family’s porch last night when she said she wanted to be in the parade,” explained Cassie’s mother, Bernadette Bush.

Instead of rushing to find last-minute decorations for the Gardens Civic Association bike parade in the North End, the Thompsons thought of a quicker, more quirky way to create the perfect look for both Cassie and her bike.

“We took things off the table and off the porch,” Cassie said with a giggle, about the 4th of July decorations used for both her and her bike’s patriotic look.

“We’ve been coming to Ocean City our whole lives and we never did the parade,” Bush said. “This is the first and we are doing good.”

Across town was another annual tradition, the South End Bike Parade.

The parade was larger than in previous years, with more than 1,350 family and friends signing up, said Michele Gillian, executive director of the Ocean City Regional Chamber of Commerce.

Gillian explained that this year was particularly significant.

“This year, the Parade Committee honored John Fallon for his dedication and enthusiasm for the parade,” said Gillian.

She continued: “John was the chairman of the event for a long time. He passed away last year. That parade was just a spectacular slice of hometown and heaven rolled into one.”

The Benners and McCormicks make the North End parade a tradition.

Jena Benner, of Naples, Fla., her daughter, Madeleine, 10, and Jena’s niece, Courtney, husband, Eddie, and their sons, Bridget, 3, and Henry, 4, of Jacksonville, Fla., will fly in July to enjoy the bike parade and spend time with family members who live in Ocean City.

Benner grew up in Ocean City.

“The bike parade is something my family plans our trip around,” Benner said, just before the parade began. “I lived in Ocean City until I was seven years old, but we have always returned to be with our family.”

Hundreds of other families also enjoyed the festivities at the Far North and Far South parades.

Dave Johnson, his son, Henry, 3, of Lancaster, Pa., and his niece Annabella Buchman, 13, of Hagerstown, Maryland, were eager for the North End parade to begin.

“We come every year. We love it,” Johnson said. “It is a tradition that I have been coming to for years. My wife Angela’s family is from Ocean City.”

Annabella, who wore a patriotic outfit, complete with a headband that included streamers, added: “I like to decorate my bike every year. And I like to finish in a race with my cousins. It is super cool”.

People along the parade route enjoyed watching the colorful procession of parade participants.

Mayor Jay Gillian, along with First Ward Councilman Terry Crowley Jr., watched some of the participants speed past in Fourth of July fashion.

“This is spectacular. What a wonderful tradition,” Gillian said. “This is what Ocean City is all about.”

Scarlett Marshall, 10, of Ocean City led the parade, along with the Gardens Civic Association golf cart.

Scarlett designed the parade t-shirts that were given out before the parade. The focus was on bike safety and obeying traffic and riding safely.

The North End Bicycle Parade, which began in the 1950s, cycles through the gardens every year. The celebration is hosted by long-time Ocean City resident Duane Sonneborn.

“It’s a beautiful day. It’s a nice tradition,” Sonneborn said. “We’ve never had bad weather for the parade except in 2018 and even then, we postponed it a day.”

Participants toured the gardens on the beautiful day with temperatures hovering around 70 degrees during the parade.

After the parades, families marveled at the 4th of July fireworks, launched from a barge on the ocean near the Music Pier.