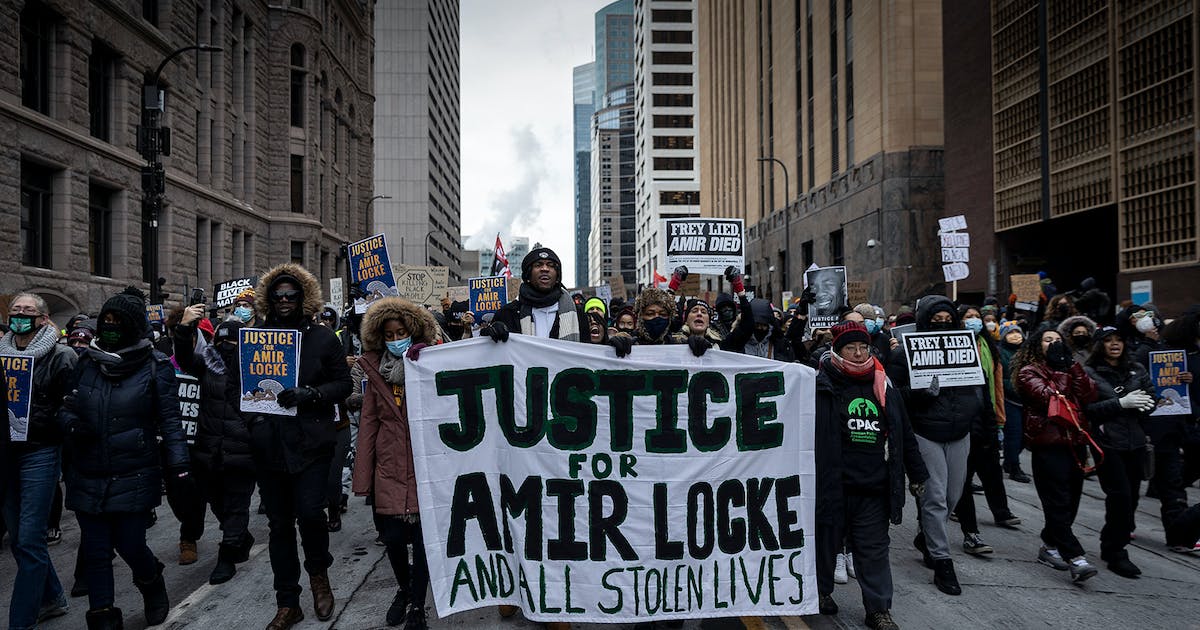 Elected officials in Minnesota repeated their calls for tougher regulations or outright bans on the use of unannounced warrants, hours after state and local prosecutors announced they would not charge the officer who killed Amir Locke.

State Attorney General Keith Ellison and Hennepin County Prosecutor Mike Freeman announced Wednesday morning that they would not charge officer Mark Hanneman because they did not believe they could obtain a conviction under state and federal law.

“If the law does not allow us to file criminal charges in this case, what can we do, as legislators, prosecutors, society and the community, to prevent a death like Amir’s from happening again?” Ellison said, before asking officials to “question whether warrants are really needed,” enacting federal legislation aimed at increasing officer accountability and reducing deaths in custody, among other things.

The death of Locke, 22, in February reignited a national debate about the use of warrants, which do not require officers to announce their presence before entering a residence. Minneapolis police were searching a downtown apartment on Feb. 2 when, seconds after entering, Locke, who appeared to have been sleeping on a couch, stirred under a blanket while holding a gun. Hanneman shot Locke, who died the same day.

It was not immediately clear whether the new policy would have prevented an instance like the one that resulted in Locke’s death.

Minneapolis police were searching an apartment in connection with a St. Paul murder, one in which Locke was not a suspect. According to a report prepared by a police practices expert for prosecutors, the request for the no-notice arrest warrant said police believed they needed one “both for security reasons and to prevent the destruction of evidence.” Among other things, he noted that a person, whose name is redacted, had fled from the scene of the homicide to the apartment building where the search occurred and that surveillance video showed someone “apparently hiding the murder weapon under their clothing.”

Some activists and elected officials had called for a more comprehensive ban on unannounced warrants after Locke’s death. Many of them now said they will watch closely to see if Minneapolis police restrict their use of the practice or continue to rely on them, citing exceptions.

“I think my biggest concern is related to the loopholes that I still see in it,” Pete Gamades, a member of the Racial Justice Network, said Tuesday night after the new policy was unveiled. Gamades was particularly concerned about the provision that allows police to cite the destruction of evidence as a reason to use an arrest warrant: “I imagine MPD could use that as a justification to continue without waiting to get in.”

Elected officials, including Ellison, who is running for re-election, said they will also be watching to see how Minneapolis enforces its new policy. Ellison called Frey’s new policy “stronger than the old one.”

See also  Why we need black history in schools, and not something like it

“Now this policy really needs to be enforced and obeyed,” he said. “So maybe Minneapolis can get the results like St. Paul, which hasn’t used a warrant since 2016, without hurting public safety.”

Some of those pushing for stricter restrictions or bans say they don’t trust Minneapolis alone to make changes and are also turning their attention to the Minnesota state Legislature.

DFL lawmakers in the Minnesota House of Representatives are seeking to advance legislation that would ban unannounced warrants in the state, a dramatic expansion of new regulations that were signed into law last year. Gov. Tim Walz has said he would sign a bill banning the practice if it lands on his desk this session.

The new bill defines no-knock search warrants as any warrant authorizing an officer to enter a property without first “knocking loudly and loudly and understandably announcing the officer’s presence or purpose and waiting no less than 30 seconds thereafter before entering the facility to allow for compliance.” by the subject.”

The proposal to go beyond last year’s regulations, put forward by Rep. Athena Hollins, DFL-St. Paul, came forward after Locke’s death earlier this year. It originally provided some exceptions to the ban, but has since been amended to ban the practice entirely before it was approved by the House Judiciary Committee last month in a party-line vote.

“The vast majority of law enforcement officers in our state do not use warrants on a regular basis, further indicating that warrantless surveillance is absolutely possible,” Hollins said in a statement after the committee introduced the bill. law last month.

However, there is no companion bill in the Republican-controlled Minnesota Senate. State Sen. Warren Limmer, the Maple Grove Republican who chairs the Senate Public Safety and Judiciary Committee, said he was leaning against supporting the proposed ban, noting earlier that “there are times when you have to use extreme measures” to arrest dangerous criminals. Instead, Limmer has chosen to focus on tougher crime proposals, such as increased penalties for certain crimes and proposed changes to the Minnesota Sentencing Guidelines Commission.

The bills moving through the Legislature are being closely watched both by activist groups that normally call for stronger accountability measures for police and by some groups that have advocated for the rights of gun owners.

Rob Doar, vice president of the Minnesota Gun Owners Caucus, who has publicly criticized the use of unannounced warrants, said the lack of charges is not surprising. Officer Hanneman’s use of force is consistent with state statute, but his action took the life of “an innocent law-abiding citizen,” Doar said.

“The lack of charges should not prevent us from seeing the reasons that really put the officers behind the door,” he said.

“I doubt the Legislature will prescribe police tactics for law enforcement, but at the end of the day, we have to make sure innocent lives are protected and due process is preserved.”