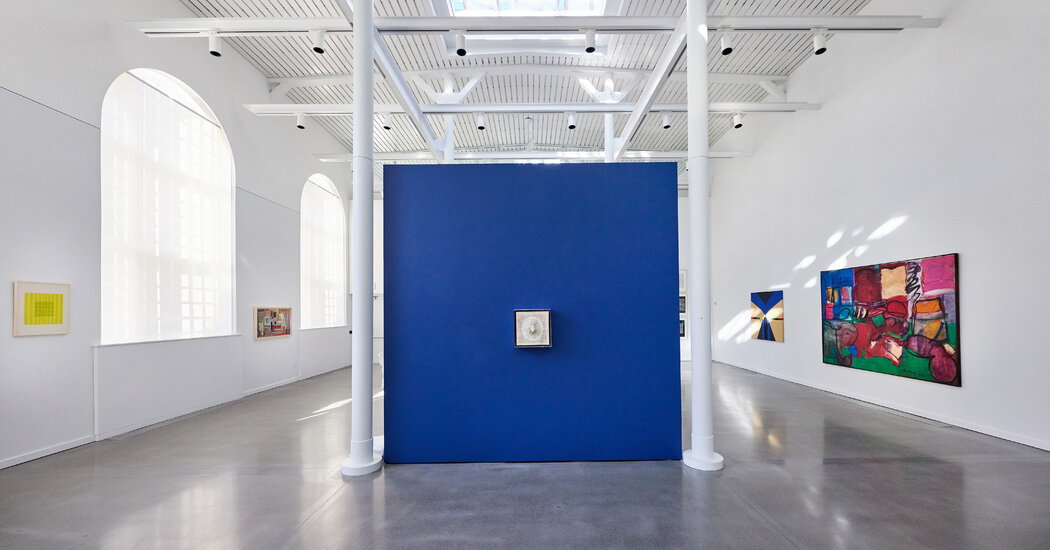 This article is part of our Fine arts and exhibits special section on how museums, galleries and auction houses are embracing new artists, new concepts and new traditions.

POCANTICO HILLS, NY — Wealthy New Yorkers have long flocked to the idyllic scenery of the Hudson Valley. Long before the recent wave of city transplants during the pandemic, John D. Rockefeller, founder of Standard Oil, chose the highest point of Pocantico Hills overlooking the Hudson River to build his great house and gardens, completed in 1913. and called You couldDutch for “lookout”.

In 1994, the Rockefeller Estate was renamed pocantic center, bequeathed by the family to the National Trust for Historic Preservation and administered by the Rockefeller Brothers Fund. The 216-acre campus began drawing visitors for tours of Kykuit, filled with art and furniture collected by generations of Rockefellers, and meetings hosted in the conference center in a repurposed barn.

This month, the David Rockefeller Center for the Creative Arts has opened on the property in the long-dormant Orangerie, which was designed in 1908 for Rockefeller’s orange groves after the greenhouse at Versailles, and has been adapted by FXCollaborative into a flexible performance and rehearsal space, gallery and artist studio.

“The mission of this is to be a place for the creative process, where artists will come and, as they create, make the work in progress available to the public,” said Stephen Heintz, Rockefeller Brothers President and CEO. Fund, which oversaw development of the $26 million facility. “The connection to the arts is in the family’s DNA and we wanted to make it more vibrant, more dynamic and more accessible, especially for groups that historically haven’t had access to something like this.”

Building on the success of Pocantico’s artists-in-residence program that began a decade ago, with music, dance and theater previously shown in the summer months on the lawn or on the former tennis court, the new center offers interior space for the first time in the year. round performances.

The Special Section of Fine Arts and Exhibitions

The 8,000-plus-square-foot Orangerie, with a long façade of arched windows and skylights on the 26-foot-high ceiling that floods the interior with light, now has a floating floors for performances at one end, retractable seating for 200 and folding doors to a new rear terrace for indoor and outdoor events.

The redesign doubles Pocantico’s capacity to eight performances a year. “Untold Tales” a multicultural musical theater and dance performance is scheduled for November 16.

The studio at the other end of the building allows for the addition of visual artists in residence. Athena LaTochaa Peekskill-based mixed-media painter, is the first recipient of the space and the $25,000 Pocantico Prize.

“We asked nominators from institutions across the country to recommend artists who were from underrepresented groups: people of color, women, the disabled or others who were denied opportunities and demonstrated artistic excellence,” said Katrina London, manager of collections and curatorial projects at Pocantico. and part of the selection jury. Ms. LaTocha will have a studio open November 5 and 6 and she will be visible as she works through large double sliding glass doors from the adjacent art gallery during her two-month stay.

The inaugural exhibition at this gallery is “Inspired Encounters: Women Artists and the Legacies of Modern Art,” organized by Ms. London and guest curator. Jeremiah McCarthy and until March 19. The show reveals a network of influences and intergenerational connections between 43 modern and contemporary works by 22 artists.

Curators have curated about half of the sample from Kykuit’s mid-20th-century art collection, which includes works by Louise Nevelson, Marisol, Lee Bontecou and Grace Hartigan, assembled by Nelson Rockefeller during his years as New York governor. from 1959 to 1973 and then Vice President under Gerald Ford. He was the last brother to live in Kykuit until his death in 1979.

“One thing that crossed our minds was how few works by women were in the Kykuit collection, and in most collections from that period,” Ms London said, putting the tally at just 8 percent. percent of the 174 artists in the permanent collection. .

The women artists who are represented in Kykuit come largely from the efforts of dorothy millera noted MoMA curator who mentored Nelson, for example, giving him an intimate 1967 collage of reconstructed eggshells and shredded liturgical texts by the artist and fiber sculptor. lenore tawney as a Christmas present.

“Dorothy smuggled them in,” said McCarthy, who along with London has brought such gems from the “Mad Men”-style 1960s galleries in the Kykuit basement to the new center’s gallery and invited contemporary artists. . included Sonya Clark, maren hassinger, Elana Herzog, melissa meyer, Barbara Takenaga Y Kay Cane to make a new work in response to the collection or heritage for the exhibition.

It had never occurred to Takenaga, a painter of organically patterned abstractions, that her work shared a vocabulary with Bontecou’s canvas and welded metal reliefs. The realization of her visit to Pocantico “was like a little gift,” Ms. Takenaga said. “I have always thought of Bontecou’s work as something sinister, beautiful and strange, a place I wish I was too.”

In her new painting “Two for Bontecou,” Ms. Takenaga superimposed and mirrored the architectural outline of Bontecou’s Kykuit relief, spinning around a dark vortex, over her own foaming shapes of poured and accumulated paint, finding a point ideal between your two styles

Ms. Clark found inspiration in small sculptures suggesting the letters of the alphabet by artist Mary Callery; Ms. Herzog in the prints of Anni Albers; and Ms. Meyer in Hartigan’s abstract expressionist paintings.

Ms. Walkingstick, in turn, responded to the spectacular views from the Pocantico grounds in her new paintings, echoing the landscapes of the 19th-century Hudson River School painters and overlaying them with decorative motifs of Indian tribes. that preceded them.

Ms. Hassinger has energized a large field with 84 units of industrial steel cable, each wavy strand cut to five feet and rising from the grass diagonally like windblown dandelions. “For me it represents the air currents of the site and the force of the flowing river,” Hassinger said, “in general, the feeling I had there.”

His installation is a counterpoint to the massive outdoor sculptures on the property, such as Henry Moore’s bronze “Knife Edge Two Piece” sculpture dropped by helicopter by Nelson Rockefeller.

“The show is a nod to the past, it takes a closed collection and opens it up to new possibilities and shows its relevance,” said Mr McCarthy. “How is a place like this useful for artists?”

These questions are trying to be addressed by the new center.

“It’s a worthy way forward for an institution that might be considered backward and connected to a period when accessibility was not on people’s minds,” said Mary-Kay Lombino, deputy director and curator of the Frances Lehman Loeb Art Center at Vassar College in nearby Poughkeepsie, who was not involved in the Pocantico project. “Historic homes have been recognizing that everyone needs to update their ideas and their style of presentation.”