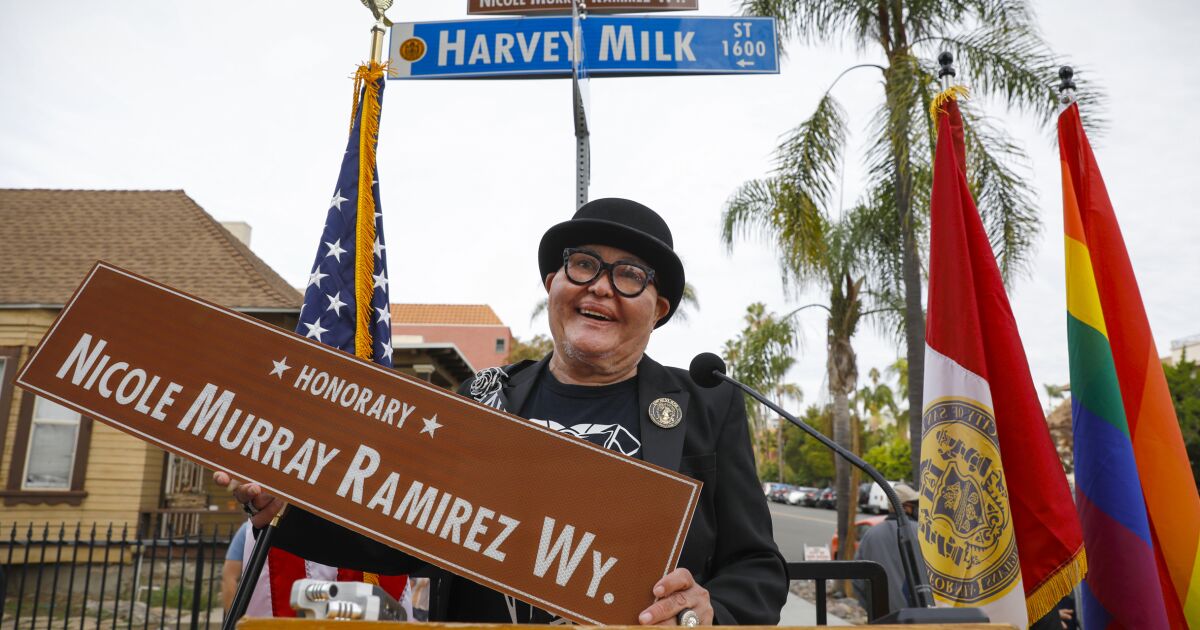 Longtime Latina and LGBTQ activist Nicole Murray Ramírez had a lot to celebrate on Saturday.

For one, it was his birthday. He also learned that he would be the next recipient of the Harvey Milk Foundation’s Medal of Honor for his dedication to social justice.

And then there was a symbolic and moving dedication in his honor at the corner of Harvey Milk and Center streets in the Hillcrest neighborhood of San Diego.

“I look at it and of course I am very honored, but I hope to see more signs like this,” he said. “I think it’s important that our city recognize diversity. We have so many wonderful people who have dedicated their entire lives to social activism, to equality.”

Murray Ramirez has dedicated more than 45 years of his life to social justice for all. His work has focused primarily on the Latino and LGBTQ communities. He led the first protests during the AIDS crisis in San Diego and lobbied the government for help. He was also active during the civil rights movement, working with labor leader César Chávez.

He is known as the honorary mayor of Hillcrest and is a member of the city and county human rights commissions.
Murray Ramirez also previously served on the region’s National Gay and Lesbian Task Force and the regional county AIDS task force in the 1980s.

The public unveiling of the honorary marker was witnessed by about 100 people, including LGBTQ service members, police officers, politicians and members of religious groups. Among them were State Sen. Toni Atkins (D-San Diego); Bob Lehman, Navy veteran and founder of American Veterans for Equal Rights; and San Diego Mayor Todd Gloria.

“Her bravery means that all of us have a greater degree of freedom that we can live in our lives. And we owe it to Nicole,” said Gloria, who made San Diego history as the first gay female mayor and the first female mayor of color.

The meeting was hosted by San Diego Councilman Stephen Whitburn, whose District 3 includes Hillcrest. He had proposed the appointment, which received unanimous approval from the City Council on November 15.

San Diego’s policy on honorary street names went into effect in 2017 and does not change official public street names. The honorary appointment is reserved for individuals or organizations “who have performed an exemplary act or achievement of lasting interest to their community, which reflects positively on the City of San Diego as a whole,” the policy says.

The designation comes a decade after San Diego switched Blaine Avenue to Harvey Milk Street to recognize Milk, a civil rights activist who was one of the nation’s first gay elected officials. He was assassinated shortly after taking office on the San Francisco Board of Supervisors in 1977.

Adding Murray Ramirez’s name to Hillcrest is appropriate, Gloria said. The area is the heart of San Diego’s LGBTQ community, where a giant rainbow flag flies, the Gay Pride Parade begins, and the San Diego LGBT Community Center is home.

“This neighborhood will always be understood to be home to the LGBTQ community and will now always have Nicole Murray Ramirez’s name at the top of the street post,” Gloria said.

Many thanked Murray Ramírez for his collaborative efforts with LGBTQ organizations that advocate for equality and inclusion. Among them were Judy and Dennis Shepard, co-founders of the Wyoming-based Matthew Shepard Foundation. His gay son Matthew Shepard was murdered in 1998.

Looking at the banner of honor, Murray Ramírez said that the United States has come a long way in the fight for civil rights, but there is still much to do. He offered some advice.

“Always be honest and always, when you’re at the table, see who’s missing from the table,” he said.