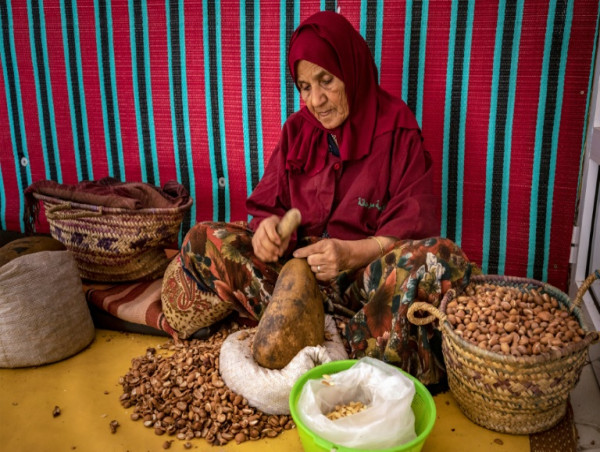 Morocco’s argan oil is highly prized by the cosmetics industry, but is now produced mainly by older workers, raising questions about how long the artisanal practice can continue.

A dozen women, sitting on the floor of a workshop in the interior of Essaouira, a port city on Morocco’s Atlantic coast, skillfully work to shell argan nuts, crush them and extract the oil.

It is a time-honored and labor-intensive trade, but one that is increasingly shunned by young people in the North African kingdom.

Women, mostly over the age of 60, manually pulp the small yellow fruits at the Marjana Cooperative, while others use hammers to crush the robust shells and remove the nuts.

The fruits are then sorted, roasted, ground and pressed to obtain their oil, which is used in cooking but has also been famous for its moisturizing and anti-aging properties for skin and hair.

“It is a difficult job and requires experience and, above all, patience,” said Samira Chari, who at 42 is the youngest artisan worker in Marjana.

The cooperative’s founder, Amel El Hantatti, says the physical nature of the work is one reason why “young people are no longer in this trade,” despite the lack of local employment.

The area’s arid landscape is home to vast argan orchards. Tourists who stop by to view the production process and purchase argan products are warmly welcomed by Marjana’s female staff.

The argan is so important to the region between the cities of Essaouira and Agadir that in 1998 UNESCO declared the area a biosphere reserve and later added cultivation of the tree to its list of Intangible Cultural Heritage.

Argan oil is the main source of income in this part of southern Morocco, where few crops survive the scant rainfall and scorching summer heat.

It is also widely used in Moroccan cuisine and has been certified with a Designation of Origin since 2010.

Hantatti founded the cooperative in 2005 and says it now employs 80 women, some working in production and others in sales.

But today, he says, “I really fear that the artisanal production of argan oil will disappear.”

The younger workers in the cooperative prefer to work in the gift shop, selling argan soap, shampoo and moisturizer.

One of them, 25-year-old Assia Chaker, said: “I tried to work for a few days with the artisans but I couldn’t continue, it’s a hard process and really exhausting.

“I like having contact with people and practicing other languages ​​with the tourists who come to the store every day, instead of spending all day crushing and pulping argan nuts.

“Anyway, one day the work will be done by machines,” he added.

But Hantatti said the process is difficult to mechanize, insisting that “oil extracted by machines will never taste the same as oil produced by women.”

“It contains all the positive vibes of these artisans, their laughter, the stories they share as they work. There is a spiritual quality that makes it special and unique.”

The cooperative produces up to 1,000 liters (about 265 gallons) of oil a year and works with tourism companies that bring groups of visitors as they pass through the popular coastal region.

Morocco produces about 5,640 tons of argan oil a year, according to official figures, about 40 percent for export.

The turnover of the sector tripled between 2012 and 2019 to reach around $115 million, according to the Ministry of Agriculture.

But Essaouira growers say the next generation has little interest in learning their trade.

“All I’ve known my whole life is argan oil,” Samira said as she roasted nuts in a large clay oven. “For me, it’s as essential as oxygen and water.”

The divorcee did not have the opportunity to receive an education and works 10 hours a day to support her children.

Samira learned each stage of argan oil production from her parents, skills that are traditionally passed down through the generations.

But she says her children have no desire to enter the industry, a choice she understands.

However, with a growing body of scientific research backing up its health claims, argan oil remains an important part of the local economy and a coveted commodity around the world.

The Moroccan government has also been paying more attention to the sector, notably by building 13 reservoirs to collect scarce rain and help mitigate the region’s worsening droughts.

Rabat aims to double argan oil production by 2030, hoping to support the rise of a “new generation of the rural middle class.”

But with fewer and fewer young people learning the trade, time will tell if another generation will learn the traditions associated with the tree.