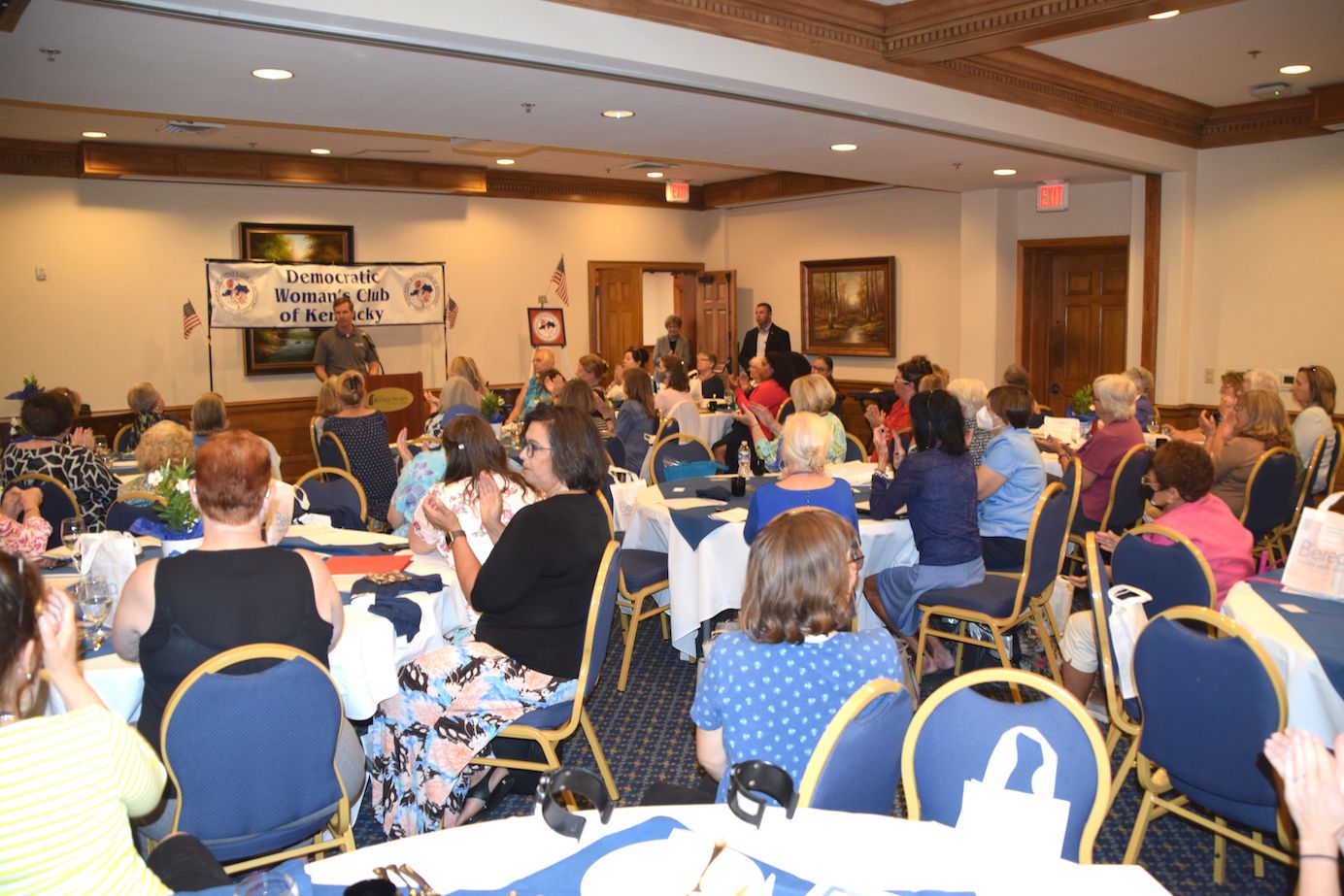 The Kentucky Democratic Women held their summer conference at the Boone Tavern in Berea last Saturday, and the sold-out audience heard from a variety of Democratic leaders and activists from across the state, including Gov. Andy Beshear.

The conference was addressed by JoAnne Wheeler Bland, president of the state organization of Democratic Women’s Clubs. Bland noted that there is interest in many counties in starting or restarting local clubs, and said the turnout at the summer conference was indicative of the increased political participation she was seeing from women across the state.

Notes from some of the speakers

The great participation could be explained by the excellent program that Bland had prepared for the event. This is the list of speakers:

I got there too late to hear Scott speak, but was later told he had a great reception and really turned the crowd on.

Here are some notes I took during the show.

Elridge noted that “there is only one party willing to defend the soul of our nation and the conscience of our community.”

He said Secretary of State Adams has been systematically removing Democrats from voter rolls. Commenting on that, he said, “I’m still nice. It’s still Al Roker from Kentucky.

“But what I really am, is that I’m fed up. Unless you are a straight white male, you do not deserve full citizenship.

“And above all, I’m sick of the fact that we now live in a community where a 10-year-old girl can be raped and this community tells her that her life doesn’t matter.

“Republicans are betting that we will get so discouraged that we will give up. Let’s make liars out of those bastards and get down to business.

“We have a fight on our hands. But as a friend keeps telling me, Kentucky is worth fighting for.”

Beshear made a grand entrance, having brought Winnie, the family dog, and the dog immediately tried to visit all the people in the front of the room. Finally, Beshear had Winnie lie down next to him as he headed off to the conference.

Pointing out some achievements of his administration to date, he shared that more than 70% of KYians over the age of 18 have received at least one injection of the Covid vaccine. He pointed to the work of dealing with the pandemic, saying: “We had to build all this COVID infrastructure from scratch. Think how far we’ve come.”

He added, “On top of that, we had ice storms, flooding, and the deadliest tornado in KY history.” He spoke of the “heaviness” of the present, but said “we are going to make it.”

He went on to contrast all the past challenges with the current reality: “A future as exciting for Kentucky as I have ever seen.” He pointed out that the state is setting new economic growth records seemingly every month, and that these were new jobs of the future, with better pay.

He said bond rating agencies had raised their ratings on Kentucky’s economy, and that Kentucky is now the “undisputed producer of EV batteries in the US.”

“This future is so exciting,” he continued. “We have to be sure that we don’t do it blindly. We have an opportunity to be the generation that brings Kentucky’s economy to top-ten status.”

In response to a question from the audience, he said to applause, “I was very happy to learn that a certain person would not be a federal judge in Kentucky.”

He also noted that BOTH the amendments on the ballot this fall, the abortion amendment and the legislature’s amendment to call themselves into session, must fail. He urged everyone at the conference to not only focus on the abortion amendment, but also to help his friends and neighbors understand the danger of giving the Republican-controlled legislature the power to meet and pass laws throughout the year.

Charles Booker, candidate for the US Senate.

Booker received a warm welcome, as Wheeler introduced him as “Kentucky’s next senator!” Here are some quotes from his talk:

“Kentucky doesn’t have to be at the bottom. We deserve better. It just brings us together.”

“We have more in common than what divides us. And if we build our politics around those common bonds, we can do the work to end poverty, root out structural racism and inequity, and get the healing we need as a country.”

Armstrong opened by talking about Berea College and his family’s experience, including his mother’s decision to go to college there, and Armstrong growing up there while his parents went to school. Here are some quotes from his talk:

“I grew up seeing education around me, and it’s in my bones.”

“Don’t be the person who kills a child’s dream.”

“I ran for office because I truly believe that government can be a force for good.”

Haydon was not part of the original show, but was asked to speak about her work with Emerge KY, the organization focused on empowering Democratic women to run for public office. She gave an update on the successes they’ve had in recent years, including how many Emerge graduates are currently in office and how many more will be running this fall. Emerge is a bright spot for Democrats in Kentucky, and it was good to hear how well he’s doing.

Hank Linderman, candidate for the US House of Representatives.

Linderman talked a bit about his campaign, but he devoted most of his time to the lessons he’s learned from his experience campaigning, and how he thinks those lessons should inform how Democrats do their jobs in Kentucky, and especially in rural areas. .

Earlier in his talk, he called Chris Hartman into the room, the director of the Fairness Organization, and said, “The organization you lead, Fairness, is proof that if we work in rural Kentucky, we will see results. ”

Here are some more quotes from his talk:

“Don’t argue with fools. They drag you down to their level and beat you with experience.”

“We have to focus on rebuilding our county parties. And instead of having them report up to Frankfort and Washington, they should go sideways and reach into the adjoining counties.”

Hartman talked about going to Vicco and meeting with his gay mayor to pass a fairness ordinance and then meeting with the city commission on it. He recounted how talking to this small town commission on equity was one of the easiest conversations he had ever had, with a final vote of 3-1.

Hartman also noted, “The 24 communities that have passed an equity ordinance only cover about 30% of our state’s population. Which means that 70% of Kentuckians still live in a place where they fear being turned away at a restaurant for holding hands with their partner, being kicked out of any public business or park if anyone suspects they are LGBTQ. , and I still hear about it today.

“And it’s not just LGBTQ rights that are under threat — ALL of our rights are on the table right now.”

Thornton recounted the journey of his life, including moving from where he was to being a Democrat. He also discussed his views on other views, such as libertarianism.

She is currently a nurse and spoke about the obligation to provide care to all people, regardless of all the conditions that may come in the way, including personal beliefs.

I didn’t capture any particularly noteworthy quotes from Whites’ talk, mainly because the entire talk was valuable, especially for any of the attendees who are involved with the finances of their local club. He discussed all the Electoral Finance Registry laws and regulations that could apply to such clubs, and when those regulations actually applied. He also emphasized the importance of getting the reports correct and filed on time. His question and answer session was the most involved of all that day.

Photos of the speaker of the day.

Some photos from the conference.

comment policy
– Only real names and email addresses are allowed for registrations and comments.
– Vigorous discussion is encouraged, but comments that go too far will be removed.

Sign in or become a Forward Kentucky subscriber to join the conversation. Simply enter your email below to get a login link.