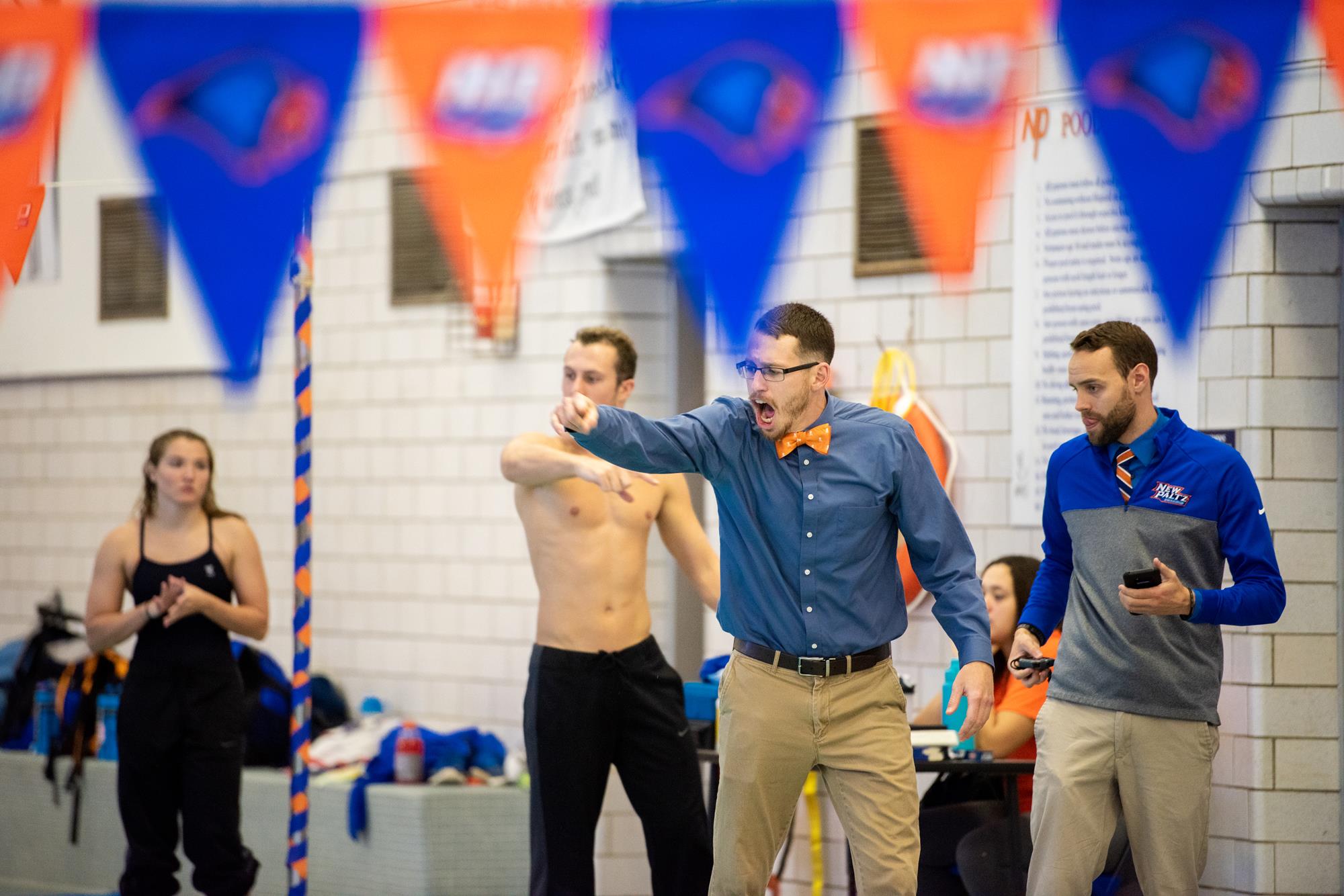 EASTON, Mass. (September 23, 2022) – Stonehill College has named matthew distler head coach of the women’s swim program, as the Skyhawks are beginning their transition to the NCAA Division I level as a member of the Northeast Conference. The announcement was made Friday by Dean O’Keefe, ’94, Assistant Vice President and Director of Athletics at the College.

“We are delighted to welcome Matthew Distler as the assistant head coach of our women’s swimming program during this exciting time for our university as it begins its transition to NCAA Division I,” said O’Keefe. “Matthew brings the passion and energy that it will take to elevate the women’s swimming program here at Stonehill, and will provide our student-athletes with a mentor who will foster a culture of personal growth and development in the pursuit of academic and athletic excellence. ”.

Distler joins Stonehill after three years as the head men’s and women’s swimming coach at SUNY New Paltz, his alma mater. She managed the program during the COVID-19 pandemic, which canceled the Hawks’ 2020-21 season, but led the women’s program to a double record of 6-5 in two seasons, ranking fourth out of ten teams competing in the 2022 SUNY Athletic Conference (SUNYAC) Championships after posting a 3-1 record in dual meets. New Paltz finished third of nine at the 2020 SUNYAC Championship, while the men’s program was fourth in 2020 and third in 2022. Distler coached 11 All-SUNYAC artists during his two competitive seasons as head coach of the Hawks’ women’s program, while that 11 men won All SUNYAC accolades during his two seasons, including first-team honoree Jared Finn in 2020, winning the 200-yard freestyle.

“I want to thank the Stonehill search committee, especially Dean O’Keefe and Cindy MacDonald, for giving me the opportunity to join the Stonehill family,” said Distler. “I cannot begin to express how excited I am to help lead this new program through its transition to Division I and help these student-athletes achieve their goals.”
Before taking over as head coach at SUNY New Paltz, he served as an assistant coach for two years. He helped the Hawks go 4-2 and finish fourth in the SUNYAC Championship on the women’s side with six All-SUNYAC performers.

The Glens Falls, New York native earned his bachelor’s degree from New Paltz in 2015. Distler attended SUNY Cortland from 2010 to 2013, where he was the SUNYAC champion in the 200 freestyle and the 200 and 800 freestyle relay in 2011. In his time at Cortland, he volunteered as a coach for the University’s Adaptive Swim Team. As a swimmer at New Paltz, Distler was named team captain and MVP in his only season with the Hawks.

In his time at New Paltz, he was an assistant coach for the Shawangunk Masters swim team in 2014-2015, and then head coach in 2015-2016. Distler was an assistant coach for the New Paltz Hawks Swim Club from 2014 to 2016. He worked as an assistant coach for the Glens Falls Varsity swim teams and the Glens Falls YMCA Gators.
Stonehill opens its 2022-23, its second full intercollegiate season, on Saturday, October 1, when it hosts its annual Purple & White meet at Massasoit Community College at noon. The Skyhawks will officially open their season two weeks later when they host Northeastern Conference member Merrimack College in Massasoit on Saturday, October 15 at noon, marking the first official home game in program history. Stonehill will compete in her first NEC Diving and Swimming Championships, hosted by the Spire Institute in Geneva, Ohio, from February 21-25, 2023.

See also  Sharing is caring: how we give the land back to animals

An NCAA Division I institution in transition as a member of the Northeastern Conference, Stonehill offers 23 varsity intercollegiate athletic programs, and women’s ice hockey is set to begin competition in the New England Collegiate Women’s Hockey Alliance for the 2022-23 season. Stonehill, who began his four-year Division I acclimation period and NEC membership on July 1, has won the NCAA Division II Northeast-10 Conference Presidents Cup six times, finishing in the top three in the final ranking 15 of the last 17 years. , and is one of ten institutions nationally to receive the NCAA Presidents’ Award for Academic Achievement, which recognizes athletic departments with an Academic Success rating of 90 percent or higher, each of the top ten years of program existence.

Stonehill teams have garnered 118 NCAA Tournament bids throughout its history, and also regularly send student-athletes to compete in the NCAA Championships in men’s and women’s track and field. Women’s lacrosse won two NCAA national championships in 2003 and 2005, and Corey Thomas, ’13 won the indoor high jump national title at the 2011 NCAA indoor track and field championships. Equestrian captured the Hunter National Championship Seat of the Intercollegiate Horse Show Association (IHSA) in 2003 and has also held several individual national championships throughout its history.