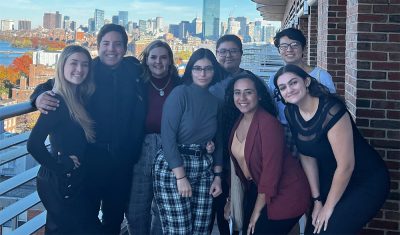 The Boston University LGBTQIA+ Student Task Force presented its final report to BU administration on October 26, detailing recommendations the University could take to provide accessible services to students and create an inclusive environment on campus.

Some recommendations from the report included creating a student-focused LGBTQIA+ resource center, staff training based on feedback from LGBTQIA+ students, and more accessible all-gender restrooms on campus.

Michael Arellano, a senior in the College of Arts and Sciences and a student government senator, wrote in an email that the report was driven by a desire to create a visible benchmark for progress on LGBTQ+ student rights. .

“We did this report for our friends, for our former graduate friends, and for our future incoming friends,” they wrote. “We hope that our report will serve as a tangible reference point that current and future students will always be able to use for generations to come.”

The 2022 report was based on a campus climate survey of self-identified LGBTQIA+ BU students. 156 students were surveyed on a variety of topics, from the availability of restrooms for all genders to the environment that the BU administration provides for gay students.

The report also compared BU’s LGBTQIA+ student resources to those of 46 other institutions, ranking BU last in providing LGBTQIA+ support to its student body.

Christa Rose, a research fellow, 2022 graduate and former president of the Queer Activists Collective, said the BU LGBTQIA+ task force report from 2018 lacked a focus on queer students in its research.

“One of my biggest motivators was this lack of institutional research on the concerns and needs of LGBTQ students,” Rose said. “If we were to rely on a task force report that was officially charged by the Provost, we would be viewed with more legitimacy from an administration perspective.”

The report said that the University should prioritize hiring QTBIPOC professionals in administrative roles for the creation of an LGBTQIA+ student center similar to the Newbury and Hillel Centers.

Jake Small, deputy director of Professional Services in the College of Communication and faculty advisor to BUST, said the recommendation extended beyond simply hiring QTBIPOC staff for greater representation.

“We need people who are diverse so that we can come up with really compelling and creative solutions to some of our biggest problems, like racism and homophobia, transphobia and ableism,” Small said. “We need people who know things based on their experiences at the table to make decisions.”

Another recommendation from the BUST report is that BU create additional restrooms for all genders throughout the campus with clear signage.

Renee Walden, a freshman in the College of Arts and Sciences, agreed with BUST’s all-gender restroom recommendation.

“The lack of attention paid (to bathrooms for all genders) really scares me,” they said. “At CAS, there’s an all-gender bathroom for the entire building, and it’s on the first floor and there aren’t many people who have classes there, so taking the time to go there is out of the question.”

Sawyer Yoh, a freshman in the College of Fine Arts, found access to gender-neutral bathrooms helpful.

See also  An Open Letter to the NWSL: The Jewish Community Needs Your Support Too

“I personally use (all-gender restrooms) all the time, because it is gender-affirming (and) much more private,” they said. “Specifically for bedrooms, it would be nice to have a gender-neutral bathroom.”

The BU Student Task Force held a “productive” meeting with upper management about their findings.

Arellano wrote that the Administration was receptive to BUST’s recommendations.

“We hope this is just the beginning of creating and strengthening the crucial link between student activism and administrative power,” Arellano wrote.

Rose said the task force will hold a question-and-answer session open to all BU faculty and staff on zoom November 21.