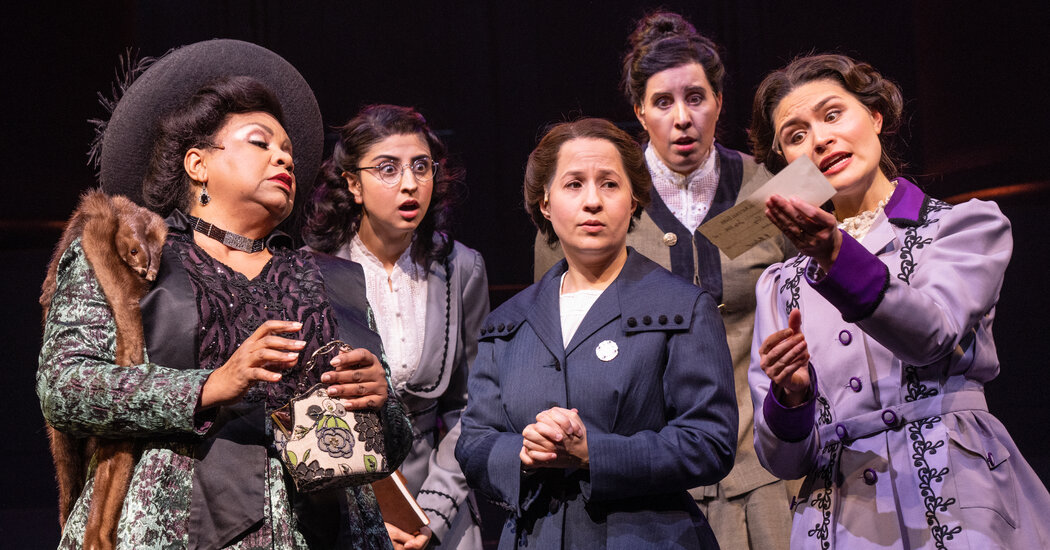 I don’t recall my grade school history books devoting more than a few sentences to the women’s suffrage movement. The nearly 100-year history of women fighting for the right to vote often boils down to two main talking points: Susan B. Anthony and the 19th Amendment, with some dismissing the suffragettes as smug agitators.

In an effort to counter such notions of these revolutionary women and their struggle, the new musical “Suffs” opens with the satirical vaudeville-inspired “Beware the Suffragette!” sung by the ensemble, made up of female, non-binary actresses. (The show was scheduled to open Wednesday at the Public Theater but was canceled due to positive coronavirus tests.) They are dressed as women, even with mustaches, caricaturing their male detractors. A tedious history lesson awaits us, these hypothetical skeptics predict in song; a feared feminist is “planning to scold you for three hours straight.”

My first thought: Dear God, I hope not.

After all, “Suffs” is a hefty two hours and 45 minutes long, and while the musical isn’t guilty of nagging, it is guilty of stifling an impressive, if exhausting, breadth of American history through his contemporaries. lens.

Shaina Taub, the Public Theatre’s playwright-in-residence and creator of the musical, stars as Alice Paul, the headstrong young suffragette who brings together a group of women leading protests, facing abuse and imprisonment, and marching on Washington for their right to access to justice. electoral ticket. cash register.

Taub gives a rock-solid performance as Paul, though his understudy (Holly Gould) has taken over the role, as Taub tested positive for the coronavirus just before the production’s scheduled premiere.

At the metaphorical barracks, Paul teams up with Lucy Burns (played by a low-key Ally Bonino), his friend and fellow suffragist who helped Paul form the National Woman’s Party. There’s also Doris Stevens (Nadia Dandashi, brimming with seriousness), an enthusiastic young student and writer from Ohio, and Ruza Wenclawska (an amusing Hannah Cruz), the Polish-American worker and union organizer. Inez Milholland (Phillipa Soo), a labor lawyer and chic socialite, is his public face; As Inez, Soo, the beloved “Hamilton” alumna, she brings sugar, sass and style to the group, marching with a cocktail in one hand and a cigarette in the other.

See also  Community First Credit Union Review: Is It Right For You?

In the seven years the musical covers, from 1913 to 1920, when the 19th Amendment was finally ratified, Paul clashes with his sisters in the fight. She has a year-long feud with Carrie Chapman Catt (Jenn Colella), who, as head of the American National Woman Suffrage Association, believes Paul’s moves are too radical. And there’s journalist and suffragist Ida B. Wells (Nikki M. James), who tries unsuccessfully to bring race into the movement, defying Paul’s myopic vision of change.

But his real opponent is the president, Woodrow Wilson (Grace McLean), who paces the stage, walking downstairs with a top hat and cane while gleefully singing misogynistic lyrics like “Men make the money / Women make the money.” bread / Men make the rules / Women make the bed.” McLean’s light-hearted performance features some of the few moments of levity in the musical, otherwise an overall rigidity pervades the production.

Perhaps it’s because the entire production feels so in tune with today’s gender politics and protests, so aware of potential criticism that it approaches its subject matter with an overabundance of caution. So just 20 minutes into the show, “Suffs” makes it clear that it’s not framing Paul as the movement’s perfect warrior-saint. When Paul spurns Wells, she responds with the song “Wait My Turn” (“Can’t you see you’re not free until I’m free? Or do you refuse to see?”), establishing her role as the racial . awareness of the musical, popping up from time to time as a reminder of the trappings of white feminism. And all of these women and the stories of their activism are uncomfortably crammed into a show too scared to miss something that’s packed with information.

In many ways, “Suffs” lands as an awkward heir to The Public’s other great historical musical, “Hamilton,” borrowing some of its approaches from structure while trying to avoid criticism of its politics around women and gender. slavery. But that is the risk involved in remaking history with today’s sensitivities in mind. Even this feminist tale serves from time to time to retort to those funky founding fathers who met in “the room where it happens”; our suffragettes sing about how no women got to witness the signing of the 19th Amendment because “a man signed the paper behind a closed door in a room somewhere.”

But the musical doesn’t need to try as hard to defend itself or prove its relevance, for example, by showing men’s threats and taunts interspersed in songs like “The March.” There’s no need to resort to gorgeousness, either, as when a Tennessee state senator’s mother, the “widow of an old farmer,” sings a banjo-laden song pleading with her son to vote for the suffrage with the promise of her pie. of favorite meat in return. Or the pairing of a few couples at the end, and the heavy-handed ending, “Never Over,” on the continued march toward progress.

The direction, by Leigh Silverman, feels as methodical as the text; the pace is fast and the songs are dense with “Hamilton”-like exposition. But “Suffs” turns out to be all work and mostly no play, and when it comes to the music itself, nothing really stands out. There are some dry hints of vaudeville and pop and some sugary songs like “If We Were Married,” a number that feels like a contemporary stab at Fred Astaire and Ginger Rogers’ 1937 rendition of “Let’s call the whole thing out.” It’s a parody of such cute courtship numbers, but it delivers exactly that.

Music is most interesting when it strips away exposition and allows the characters to express their hopes, frustrations, and desires. Colella tops her performance on one of those songs, the prickly “This Girl.” Colella cuts off her words and sharpens her gestures, hitting her notes with the punch of a boxer in the ring. Harmonies, like those in the ensemble number “How Long,” which shifts from a tone of desperation to one of resistance, also give the music some much-needed dimension.

See also  Money saving tips: Mum says a family of four can save £60 a week at the grocery store at Aldi | Personal Finance | Finance

Choreographer Raja Feather Kelly’s typically transgressive style (showcased in shows like “A Strange Loop” and “Fairview”) feels fangless, chained to his very literal interpretation of the material; there are many marches and poses, syncopated steps. Mimi Lien brings a similar starkness to her scenery—the stately steps and columns of Congress, perhaps, or some institutional building—but the simplicity works here, allowing “Suffs” to focus on its diverse cast of playmakers. history. In costume design, Toni-Leslie James strikes a satisfying balance between high-waisted formal skirts and lace-up black boots, and the striking wide-brimmed hats have enough ribbons and feathers to make a southern parishioner swoon.

“Suffs” ends with the passing of the torch from one generation of changemakers to the next, revisiting the ultimate clash between new politics and old politics: what was once revolutionary becomes obsolete. For all the work this show does to illuminate the successes and failures of the women’s rights movement and the ever-evolving nature of our politics, it focuses as much energy on appearing as timely as possible. But, as the suffs learn, the movements transform; our government leaders change, as do the demands of the people on the picket lines. It’s a lesson the musical must take to heart: You can’t live in the past, present, and future of our nation’s politics at the same time, at least not without losing your way.

suffer
Through May 15 at the Public Theatre, Manhattan; publictheater.org. Duration: 2 hours 45 minutes.