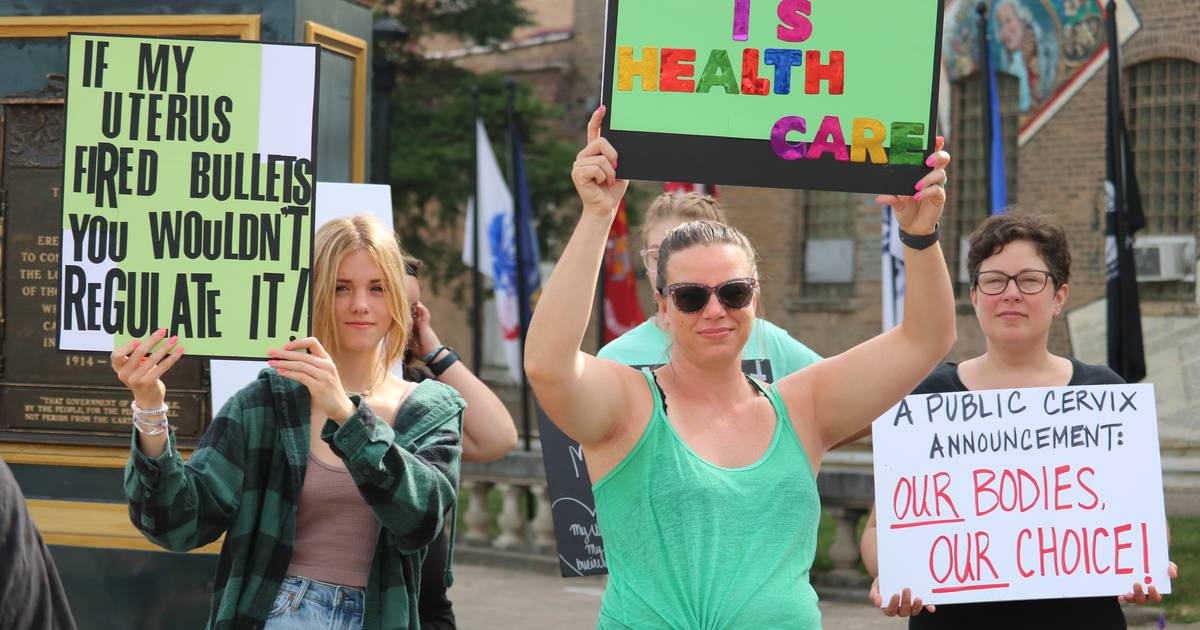 DeKALB — More than 60 people kicked off their July 4th festivities in the streets of downtown DeKalb on Monday, exercising their right to demonstrate in support of reproductive rights.

Protesters at the event lined up in the courtyard of Memorial Park, located at the corner of First Street and Lincoln Highway, next to the Annie Glidden mural.

Anna Henderson, a Northern Illinois University doctoral student who organized the rally, said she felt compelled to organize the protest.

“I was outraged by the reversal of Roe v. Wade, and I thought the 4th of July was the perfect day because women’s marchs everyone is protesting today,” Henderson said. “I think Independence Day is a great day to point out the hypocrisy of half the population who don’t have freedom and choice over their own body.”

Hannah Walker, 14, of Kingston, protests Monday, July 4, 2022 alongside Michelle Walker of Kingston and Jen Barton of Genoa during a reproductive rights rally in downtown DeKalb. The Independence Day rally was organized to protest a recent US Supreme Court ruling that overturned Roe v. Wade, which protected access to abortion under federal law.

The event was held in the wake of the US Supreme Court’s June 24 decision to overturn Roe v. Wade. The controversial decision overturned a nearly 50-year-old federal court ruling protecting access to abortion, prompting states across the country to enact their own legislation.

Trigger laws went into effect in several states on the day of the ruling, primarily giving states the ability to establish pathways to ban abortions or take steps to limit access.

But the ruling does not affect the state of Illinois, where abortions remain legal and in some cases are publicly funded. Reproductive health care, including abortions, became legal in Illinois with the passage of the Reproductive Health Act of 2019.

“It’s disheartening because we’ve already been through this fight, and some people on the Supreme Court decided they didn’t agree with it,” Johnson said. “They are voting based on their personal feelings and not on the law. It makes you lose a little faith in our democratic system. Hopefully all these people across the country standing up will make an impact.”

Several bystanders honked their vehicle horns in support of the protesters and their cause.

Rochelle resident Kristi Olson said something has to give with the Supreme Court’s decision.

“I think it’s a big step backwards,” Olson said. “I think it shows that people involved in politics don’t listen to people, like they’re supposed to. I certainly hope we don’t have to go back to the old ways of abortion. Our current world cannot support more population. We can’t even handle the population we have, let alone keep bringing babies.”

DeKalb resident Marti Brown said the reversal of Roe v. Wade is a slippery slope and said she believes other rights could be at stake next.

“The court is very conservative and does not represent the majority in our country,” Brown said.

Protesters raised banners in the air with phrases ranging from “Roe, Roe, Roe the Vote” and “My body, my choice” to “Abortion is health care” and “No choice, no freedom.”

Henderson said she is pleased with the outcome of the protest.

“I am very happy with the participation,” she said. “I’m glad people are coming together and using their voices to protest laws they don’t agree with.”