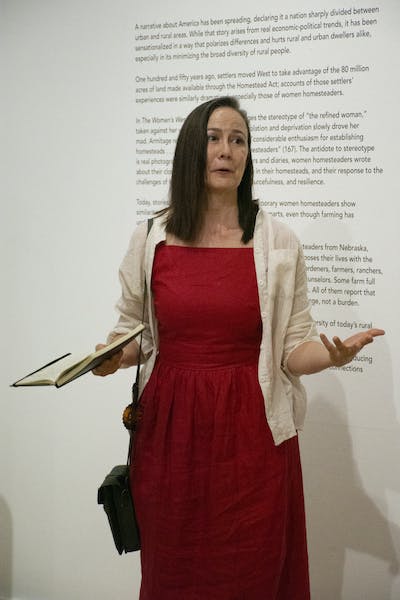 “I feel like I’m the richest woman in the world because I do everything my brain conjures up,” said Annie Warmke, a farmer from Blue Rock Station in Philo, Ohio.

Warmke is all about building and creating things for your home and living a life of Mother Nature’s goods. She is what might be termed a modern day farmer and is portrayed in the Elizabeth Thompson curated exhibition that seeks to romanticize and question rural life.

From the field of Pawhuska, Oklahoma, Thompson felt the need to delve into the contradictions that circulate among people outside the urban space. So the 55-year-old woman began researching and writing a chapter for a book called “Rural Woman,” published in 2021.

“What I was seeing is that there are nightmares and fantasies about what it means to live in rural America,” Thompson said. “So what she wanted to get was the truth…of what it means to be a rural woman living in America today.”

Thompson’s finds are currently on display at the Kennedy Art Museum in Athens, 100 Ridges Circle. Her exhibition, “Peasant Women: Past, Present, Near and Far,” opened in September and will remain on display until mid-March of next year. In a small room at The Ridges, current and historical photographs, quotes, and fabrics surrounding agriculture in southeastern Ohio are displayed and contrasted.

“I use this word ‘occupation’ because it’s kind of a general phrase,” Thompson said. “Technically, occupation refers to people who are making most or a large amount of their own food. They are gardening, milking cows, they have chickens, they are collecting eggs. And they are getting close to being self-sufficient.”

Thompson said not all of the women she interviewed would technically qualify as farmers, but most of them come pretty close.

Using that terminology, Thompson and the exhibit draw on the Homestead Act of 1862, which gave many Americans 160 acres of fairly inexpensive public land. The Act granted land claims in 30 states, forcing many indigenous communities to move west, decreasing buffalo numbers and implementing unsustainable farming methods, as many of the settlers did not necessarily have farming experience. The Act played a crucial role in the westward expansion of the U.S. and, in the face of its harmful nature toward Indian nations, was otherwise innovatively inclusive, allowing women, immigrants, and formerly enslaved to own land. The only group excluded from the Act were people who had helped the Confederacy.

“Athens is a mecca for farmers and farmers,” Thompson said. “Athens has such an amazing farmers market and such a large community of people who do that kind of environmental and sustainable work, so I thought it would be appealing to the people of Athens to highlight some of these farmers and women. I also thought it would be a way to honor these people who work so hard and do it for their families, but also to improve the climate and help mitigate climate change.”

Thompson said she lived in Athens while pursuing an academic career and worked as an instructional associate professor in Ohio University’s department of English for many years, before she was laid off as a result of financial shortfalls caused by the coronavirus pandemic. COVID-19 in 2021. While his fascination with American literature and scholarly work is undeniable as he talks about his research approach and studies with a soft voice filled with admiration, Thompson was able to take his knowledge and transcend it into other fields as well.

Making the most of that unfortunate situation, she applied for a guest curator position at the Kennedy Museum of Art and got it.

“As I was writing the chapter, I kept looking at all these photos and I thought, ‘Wow, that would be really cool to share,’” Thompson said.

With her academic background in mind and a previous focus on early American settlement and the representation of Native American women, Thompson chose a comparative approach for her first exhibition.

“I have always been interested in museums and have always tried to use museums in my classroom,” Thompson said. “I thought it was a very visual project. I really liked the idea of ​​juxtaposing the historical and the contemporary.”

His own upbringing played a huge role in taking his work in the direction it is now.

“One thing I can tell you is that I grew up in rural Oklahoma,” Thompson said. “I’ve always had a lot of interest in music and culture and was looking forward to getting out of Oklahoma.”

Thompson grew up in Pawhuska, which he described as the headquarters of the Osage tribe.

“I always felt like I was passing through,” Thompson said.

And though he left Oklahoma behind, he said he never really left it. She described how she began researching her family roots on ancestry.com.

“What I found is that my ancestors were settlers,” Thompson said. “It wasn’t just a couple of them, but many, many of them.”

Thompson describes herself as an avid gardener, something she believes must be in her DNA. Her personal connections to the history of agriculture and occupation help frame her passion for the subject. Thompson’s soft, reassuring voice doesn’t reveal much enthusiasm on the subject. Only her incessant desire to talk about her accomplishments underscores her passion.

Bringing together all of her research interests, experiences, and her own history, Thompson curated the exhibition for the Kennedy Museum. Divided into five parts—Build and Create, Home, Farm and Garden, Raise Animals, and Raise Children—the exhibit juxtaposes the perspectives of women who lived in Nebraska, Montana, Oklahoma, and North Dakota from 1862 to 1920 and those of six women from the Appalachians getting close to what might be considered a modern form of occupation.

“We offer these stories to educate, dispel stereotypes, highlight the diversity of rural women today, and help bridge the gap between urban and rural,” Thompson wrote in a text that can be found on the walls of her exhibition at the Kennedy Museum.

In putting together the exhibition, Thompson asked essential questions, such as what it means to be a real woman today.

After losing her job at OU, a lot changed for Thompson, and it raised the question of what she really wanted in life.

She remembers that she has been very interested in meditation and mindfulness for the last 25 years.

“I wanted to go somewhere where there was a beautiful environment, a beautiful location, a focus on education,” Thompson said.

Today, when she’s not a guest curator, she works at a Buddhist meditation retreat center in central Massachusetts.

“Do what you want to do,” Thompson said. “You don’t have to feel stuck.”

Ultimately, Thompson would like to combine mindfulness and teaching at a university, but also return to writing. She said that she values ​​the career she pursued before and appreciates what she learned at the academy, but in the meantime, she is grateful to educate in other ways, including through displaying it.