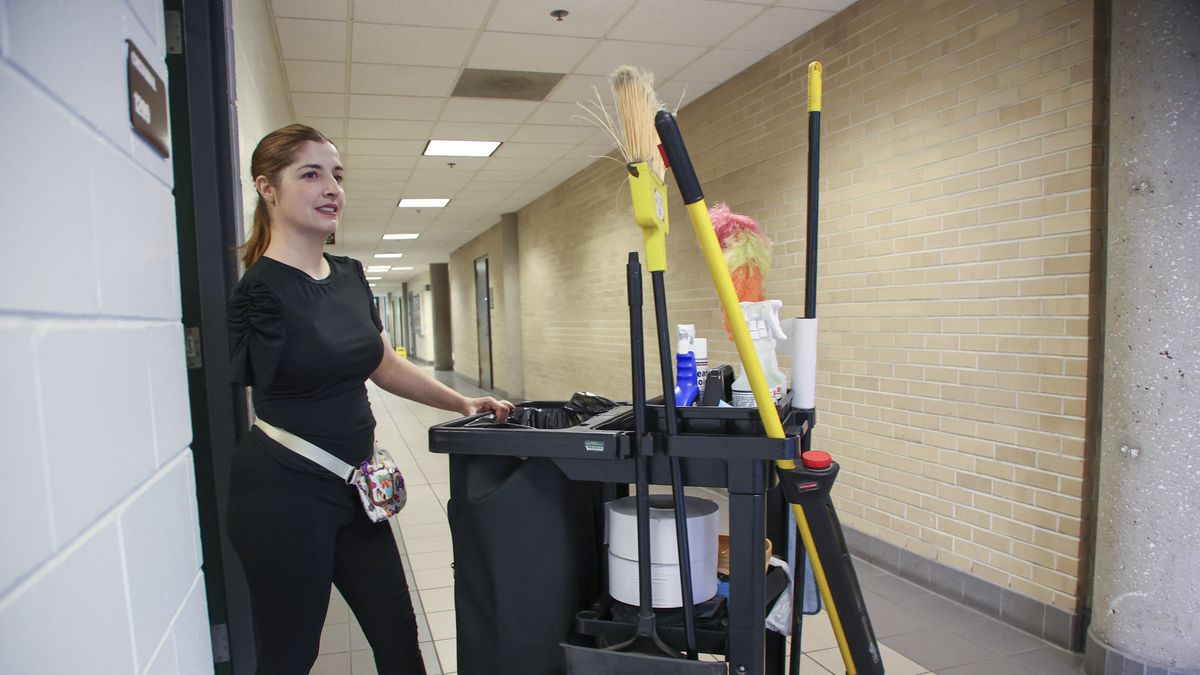 TAMPA — When she wakes up before dawn, Paola Andrea Gutiérrez likes to go through her cleaning supplies. Everything has to be in order: a mop, a bucket, a dozen garbage bags, a scrub brush, a mirror cleaner.

For four years he has been cleaning apartments, offices and public toilets. Born in Colombia, Gutierrez said she had trouble finding work here, in part because she can’t speak English and lacks formal education.

But he faced another challenge: he was born without his right arm.

She doesn’t have millions of followers. But she has enough to feel like she’s doing something worthwhile. With her videos amassing 306,000 likes, she has amassed more than 30,000 followers on TikTok, where she goes by @19paog.

While domestic workers have suffered greatly due to COVID-19, low wages, and discrimination, Gutiérrez maintains a positive outlook.

“We have to learn from the circumstances to transcend,” Gutiérrez said in Spanish.

With more than 112,000 domestic workers in Florida, 9 out of 10 are women, according to a recent study by the Florida Policy Institute, a local nonprofit organization. Of these, Latinas represent 46% in the cleaning and care industry. The study also found that immigrants are overrepresented in domestic work, with at least 3 in 5 workers (60%) in those jobs.

Gutiérrez jokes about her broken English and the reactions of some people when they see her mopping floors or cleaning mirrors with one arm. Sometimes people don’t see her personal sacrifice, she said, and her desire to get ahead.

“Disability is a beautiful art because you learn to do things in a different way,” he said.

Gutiérrez was born in Medellín, in northwestern Colombia, in difficult conditions and poverty. The region was full of drug traffickers and guerrillas.

She spent most of her childhood with her late grandmother, Susana, learning to be confident and independent. They talked about the unique challenge she faced.

“As a child, you don’t understand why people talk about you, or look at you differently, especially when they don’t know you as a human being,” Gutiérrez said. “At the end of the day it’s a good life lesson because you learn to be thoughtful.”

Her grandmother taught her to clean and adapt to the world.

“She was my inspiration, the woman who showed me the way to be strong and reshaped the perception of my condition,” Gutiérrez said. “She told me: ‘You can do whatever you want. Nothing is impossible, believe and you will see’”.

Stay on top of what’s happening in Tampa

You’ll receive a roundup of the most important news from the Tampa community twice a week.

You are all registered!

Want to get more of our free weekly newsletters delivered to your inbox? Let us begin.

Explore all your options

That is exactly what she did.

In Colombia, Gutiérrez taught herself business administration, accounting and marketing, along with some free online courses. She worked as a secretary and call center representative for over 20 years. She also ran her own small business as a health insurance agent.

In 2013, she decided to open her own non-profit organization to help children and people with disabilities like her. Gutierrez called it the Making Us Bigger Foundation.

He collected food, clothing and money to help children with disabilities. In December 2013, she also organized the first inclusive fashion show in Medellín to support more than 50 minors in vulnerable situations.

Leidy Henao, a former volunteer for the foundation, said that Gutiérrez has the ability to innovate and carry out the projects he proposes.

“She is a cheerful person and likes to help others,” Henao said. “She has a huge personality.”

Gutiérrez decided to move to the United States to live with her husband, a Puerto Rican who now works as a welder in Tampa.

“It was a new beginning,” Gutiérrez said.

When the pandemic shut down offices, universities and restaurants everywhere, Gutiérrez focused on his videos. She became a motivational speaker, a mentor, a virtual friend. She documents her life in a light-hearted and humorous way.

It was something that Gutiérrez started in 2018 among the Latino community when TikTok was officially presented. In a series of videos that he posted on the social media platform, he encouraged his followers to find ways to achieve his goals.

Through TikTok, Gutierrez said, she could break the mold with a fun and creative expression of herself — from sharing inspirational quotes and positive vibes with her fans to cracking jokes and dancing.

In a video, she said she feels like a “diva” when she cleans.

“Life is to be enjoyed at all times,” says one of her messages while she is seen dancing to the song “(I’ve Had) The Time of My Life” from the movie “Dirty Dancing.”

Gutierrez said she wants to write children’s books about the importance of being confident and positive.

“I want to do it because behind a child there is a future and the possibility of living in a better society.”

Her current goal is to raise awareness about bullying by talking about it.

“If you are a victim of bullying, don’t be silent,” he said.

While social media tends to get a bad rap, Gutiérrez has used it to empower women and promote positive thinking.

“Social media helped me share that there is nothing to hide,” she said, “and especially nothing to be ashamed of.”