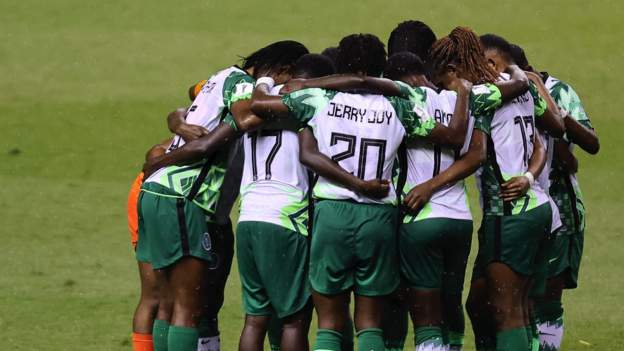 Nigerian footballers and officials are furious after enduring a “horrible experience” returning to Abuja from the U-20 Women’s World Cup.

While traveling back from Costa Rica, the team was stuck at the Istanbul airport for 24 hours, forcing team members to sleep on the terminal floor or in chairs.

eliminated from the tournament through the Netherlands on Sunday, The Falconets faced delays on connecting flights in Panama and Colombia before landing in Turkey on Tuesday, after their next flight had already departed for Abuja.

Images of the team “sleeping rough” circulated widely on social media, prompting the Nigerian Football Federation (NFF) to issue a statement excusing himself from guilt for the chaotic journey.

“Who booked the flights is irrelevant because our horrible experience in Turkey was avoidable,” one of the U-20 players, who wishes to remain anonymous, told BBC Sport Africa.

“We were not allowed to leave the airport because we did not have transit visas and the airline said that it could not be held responsible for passengers who missed their flights.

“Someone was communicating with different people, and for some reason they didn’t accommodate us in one of the airport hotels. We slept rough on the terminal floor and some in chairs because the next flight to Abuja was scheduled for Wednesday. “

The NFF claimed that world governing body Fifa had booked return plane tickets from Costa Rica, and visa problems meant players were unable to leave the terminal in Istanbul to travel to a hotel.

A FIFA spokesman said the organization helps arrange travel in coordination with teams leaving their competitions before departure, but connection and visa issues are out of its control.

The NFF, under fire, said it also tried unsuccessfully to arrange visas to travel through Germany to and from the U-20 Women’s World Cup in Central America, and that FIFA was unable to intervene.

It is not the first time that the NFF has appeared in the news for transportation issues involving the country’s female factions.

In February, the first team suffered long delays at the airport on her return to the capital city after securing a place at the 2022 Women’s Africa Cup of Nations.

On that occasion, problems with covid-19 testing arose and the NFF said it “had no control over how things would be approached” by airport officials.

The U-20 women’s team was welcomed at the airport by NFF Secretary General Mohammed Sanusi and Toyin Ibitoye, representative of the country’s sports minister.

“We Nigerians appreciate all his efforts in the tournament in Costa Rica, but we are saddened by the fact that on his return he had to sleep at the airport,” Sanusi said.

“This was beyond our control. The fix was made by FIFA, and you knew what happened better than us.”

Sanusi, who apologized, also promised the players that their outstanding bonuses will be paid when the senior team receives theirs.

the The Super Falcons boycotted training ahead of their third-place match against Zambia in the Women’s Nations Cup last month over non-payment of allowances and bonuses.

Each team member he is still owed more than $10,000 in relation to his time at the tournament in Morocco and other training camps.

“The money approved for the Super Falcons is in the process of being processed by the Ministry (of Sports) and we are going to pay them from there,” said Sanusi.

Despite receiving a cash gift from the ministry, another under-20 player said the team is unhappy with the way they have been treated and are skeptical whether they will be paid in full.

“After the horrible travel experience, some of the players complained of body aches on the flight from Istanbul,” he added.

“Now that we need our unpaid bonuses, it’s another promise that we’ll get paid later. When that payment comes, the players don’t know.”

“Someone even said that we should try to collect our money now before the NFF board leaves office, or it will end up as another empty promise.”