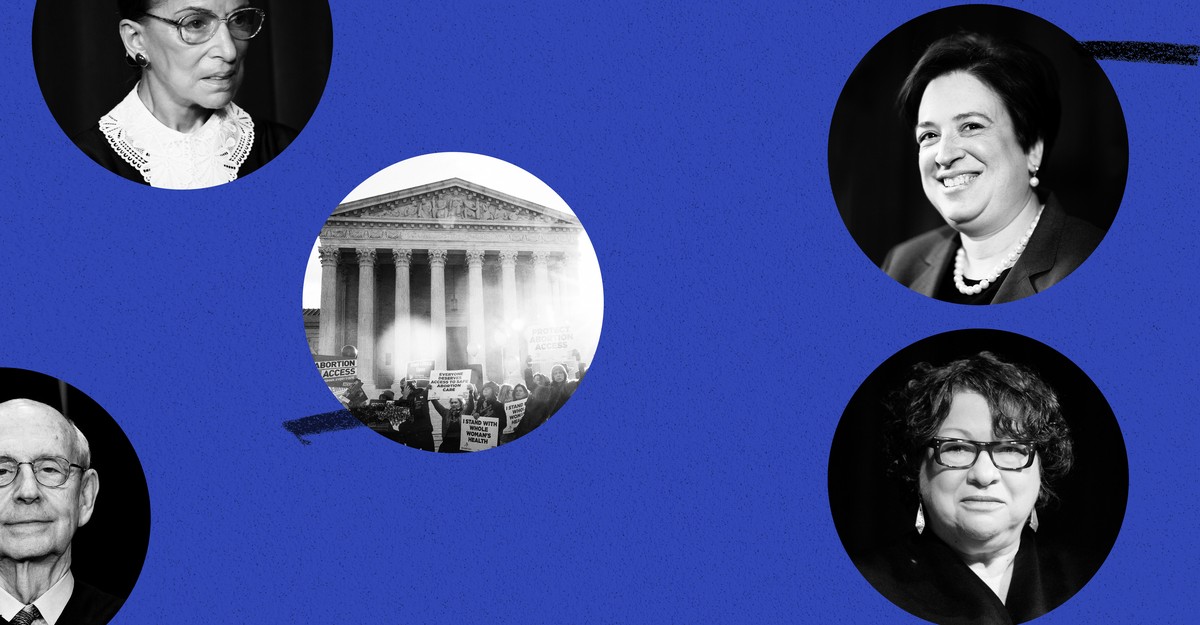 Sometimes I think about March 2, 2016, the day of the oral argument of the Supreme Court in Comprehensive women’s health v. hellerstedtas the last great day for women and the legal system in America.

To be sure, there are many glorious moments to choose from, both before and after the election of President Donald Trump, but as a professional court observer, I had a front row seat to this story, one that gave me the feeling that women in the United States they had achieved a milestone that would never be reversed. Comprehensive Women’s Health it marked the first time in US history that a landmark abortion case was being heard by a Supreme Court with three female justices. Twenty-four years earlier, when the last momentous case of abortion…Planned Parenthood vs. Casey—had come before the Supreme Court, only one woman, Sandra Day O’Connor, sat on the bench. She backs up a bit more and Roe vs. Wade, the groundbreaking 1973 case that created a constitutional right to terminate a pregnancy, was previously argued and decided by nine men and zero women. And when Griswold vs. Connecticutthe lawsuit protecting the rights of married couples to buy and use contraception was argued in the high court in 1965, that court was made up of nine men so concerned with the issue of contraception that in oral argument no one was sufficiently brave enough to name the birth control device that is being litigated.

From the March 1964 issue: What Happened to Women’s Rights?

Buried in that history is the truth about how legal decisions involving women, their wages, their bodies, their education, the custody of their children, and their votes have been framed in American courts until very recently: by husbands and well-meaning parents with surprisingly little information. For a long time, we were lucky. We got birth control and access to military schools, our own credit cards and all kinds of equal rights over the years.

But everything felt different in 2016. Women now made up 50 percent of the law school population; they were partners in law firms, members of Congress, judges and professors, and three of them held lifetime positions on the highest court in the land. Generations of women who had played by the rules and changed American institutions and government were poised to be part of genuinely egalitarian politics. Sure, there were setbacks and stumbles. Although half of U.S. law students and lawyers were women, women made up only one-third of lawyers in private practice, 21 percent of law firm equity partners, and 12 percent of its managing partners, presidents or executive directors. Less than 5 percent of the CEOs of Fortune 500 companies were women. And just 24 percent of members of Congress, 18 percent of governors, and 29 percent of state legislators were women.

So, okay, things weren’t perfect. But they were making progress. Pay equity was just around the corner, better childcare and leave policies were coming our way, and as discussions progressed in Comprehensive Women’s HealthIt seemed clearly possible that the last days of men telling women what to do with their freedom and their life choices and their family decisions were dawning.

On that bright, frigid March morning, Ruth Bader Ginsburg, Sonia Sotomayor, and Elena Kagan teamed up to question Texas Attorney General Scott Keller as he maneuvered through his rationale for why, in 2013, Texas had passed new requirements on clinics and doctors that would effectively close most abortion facilities and prevent women from terminating their pregnancies.

Jeffrey Rosen: The life of RBG, in his own words

They were onerous regulations. In rural areas, with clinics closed, women were forced to drive for days to access care. Entire sections of Texas did not have accessible clinics. Poor women and women of color bore the brunt of the lack of facilities. They had to find days off work, sleep in their car, and return for repeat appointments. State legislators had argued that the sole purpose of the new clinic laws was to protect women’s health, but women’s well-being had catastrophically declined, and in legal proceedings, Texas was unable to provide evidence that they would improve clinic outcomes. health was the real reason for the regulations. Pressed on this question during oral argument, Attorney General Keller was barely able to finish a sentence.

As the three justices, ably aided by Justice Stephen Breyer, the Court’s fourth feminist, took turns nibbling on the beleaguered Texas attorney, I witnessed for the first time in my 16-year career as a journalist something amazing: the rules. of the Supreme Court. it had changed overnight. Court argument sessions are highly formalized, tightly controlled enterprises that haven’t really changed much over the course of two centuries, with the exception of COVID-era phone sessions. The nine justices sit on the same high bench next to the same spittoons (spittoons!), sipping from the same tall silver shake cups they’ve been using for decades when lawyers present their formal arguments.

But that morning in 2016, the three female judges ignored formal time limits and gushed about their bewildered male colleagues. Justice Ginsburg at one point essentially instructed the Chief Justice to add extra time to the clock for a champion of female reproductive freedom. And he complied.

What was exceptional and, in hindsight at least, heartbreaking that morning was that it gave America a glimpse of what genuine or near gender parity might have meant for future women in America’s powerful legal institutions. It felt, in a way, like the end of the story.

From the May 2022 issue: The future of abortion in aRoe America

The 5-3 ruling that came down nearly four months later upheld a woman’s fundamental right to choose to terminate her pregnancy. That majority opinion, written by Breyer, called on courts and lawyers to remove centuries of accumulated lies and stereotypes about fragile, confused women making poor decisions and instead consider the real ways women live their economic and moral lives. . It was a constitutional breakthrough, written by a man who saw women as agents in their entirety.

At the time, the country seemed inches away from harnessing the law to serve women’s dignity and equality interests on a massive scale. In that spring of 2016, we really thought we could see gender equality from our back porches.

And then it was gone. With Ginsburg’s death, in September 2020; the seat of three justices pledged against abortion rights by Trump in the years since Comprehensive Women’s Health; Y the investment of Roe in June 2022, that case is now likely to be a high point that we may not see in the courts again anytime soon, or in constitutional progress for women. It has become, for me at least, a marker of the end of history, but in a completely wrong direction.

America’s journey toward greater freedom and justice for all could have died completely with Judge Ginsburg were it not for the millions of female attorneys who boldly and quickly mobilized to organize in the service of democracy, dignity, and equality. These women defended not only civil rights, but also the justice system itself, through the crucible of the Trump years and, now, beyond. They fought for pregnant migrant teens at the borders and brought consequences for the white supremacists who invaded Charlottesville. They fought for the right to vote and for the right to bodily autonomy. They showed up and got the job done without praise or fanfare. In the grand scheme of American history, these women, using the tools of law and organization, gave the country the immeasurable gift of becoming better, more tolerant, and more just.

This article has been adapted from Dahlia Lithwick’s forthcoming book, Lady Justice: Women, the Law, and the Battle to Save America.