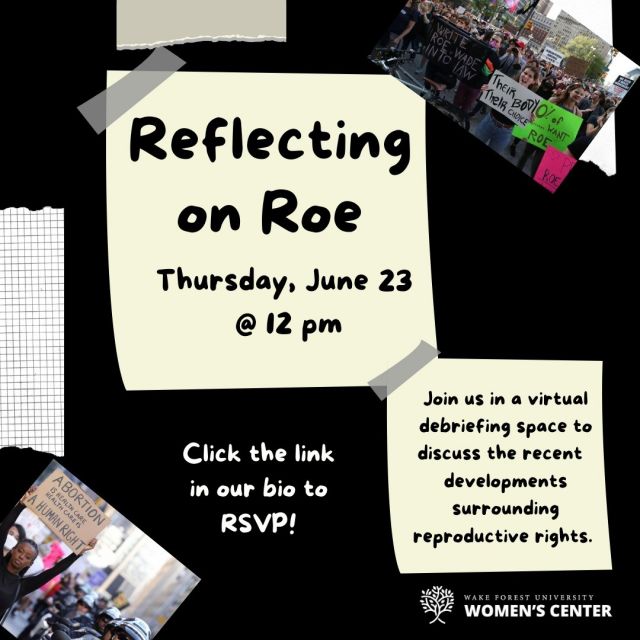 The event focused on the 1973 Supreme Court decision, which was reversed on Friday, June 24.

This pro-choice, debate-style event was created in response to the draft majority opinion that overturned Roe vs. Wade which was released by POLITICO in early May. Antayzha Wiseman, program coordinator for both the LGBTQ+ Center and the Women’s Center, and Deb Marke, Deputy Director of Advocacy and Education for Social Justice in the Office of Community Engagement, organized the event to provide an environment for students to discuss and reflect safely on the next decision. The event, in particular, was held the day before the Supreme Court struck down Roeand another event is scheduled for July 6.

The event began with a presentation by METERArke who educated attendees on Roe vs. Wade and the possible consequences of its reversal. She began by describing Dobbs v Jackson Women’s Health Organization, the case that initiated the reconsideration of the Supreme Court of Roe vs. Wade. In this case, Mississippi asked the Court to uphold its constitutional ban on abortion at 15 weeks of pregnancy. Marke discussed the impact of these national changes alongside the three Supreme Court Justices recently appointed by President Donald Trump. He also highlighted the importance of trigger laws, or laws that came into effect immediately after the repeal of Roeand the precedent Roe vs. Wade established for other cases of right to privacy.

“Lawmakers have begun talks about repealing Griswold vs. Connecticut that provides constitutional protection for the right to access contraception,” Marke said. “Arguments about privacy in griswold paved the way for same-sex marriage.”

Marke located this national story by sharing North Carolina’s abortion policies and the ways in which Roe vs. Wade being annulled could affect the state.

“If Roe is struck down, abortions would not be immediately banned in North Carolina,” Marke said. “It is unlikely that North Carolina’s Republican state legislators will pass a more restrictive abortion law that can escape Democratic Governor Roy Cooper’s veto. Although Republican lawmakers have a majority, it is not a large majority that would allow them to override a veto,” he read in the filing.

Wiseman followed the presentation with a time for reflection. Participants shared their feelings and the ways they have responded to the upcoming Supreme Court decision.

Pro-choice people who attended were particularly concerned that overturning Roe vs. Wade will disproportionately affect certain groups. According to Marke’s presentation, people facing systemic racism and those with limited access to health care would be hit the hardest by the change. Another major concern is that it would set a precedent for other Supreme Court decisions to be overturned. Participants were concerned that the right to contraception, same-sex marriage, and personal privacy might be threatened.

The participants agreed that canceling Roe vs. Wade it would be a devastating loss of bodily autonomy. To preserve the privacy of the participants, specific quotes cannot be shared.

To wrap up the event, Marke and Wiseman provided a resource document to share ways students can stay engaged and act on their opinions.

The Women’s Center looks forward to continuing to support women on campus during this time.

Official statement from the Women’s Center on the overturn Roe vs. Wade repeated Wiseman’s words.

“We are here to support you as you navigate what this news means to you and your loved ones,” the statement said.